Five laps of Silverstone results in about 5,000 miles of tyre wear 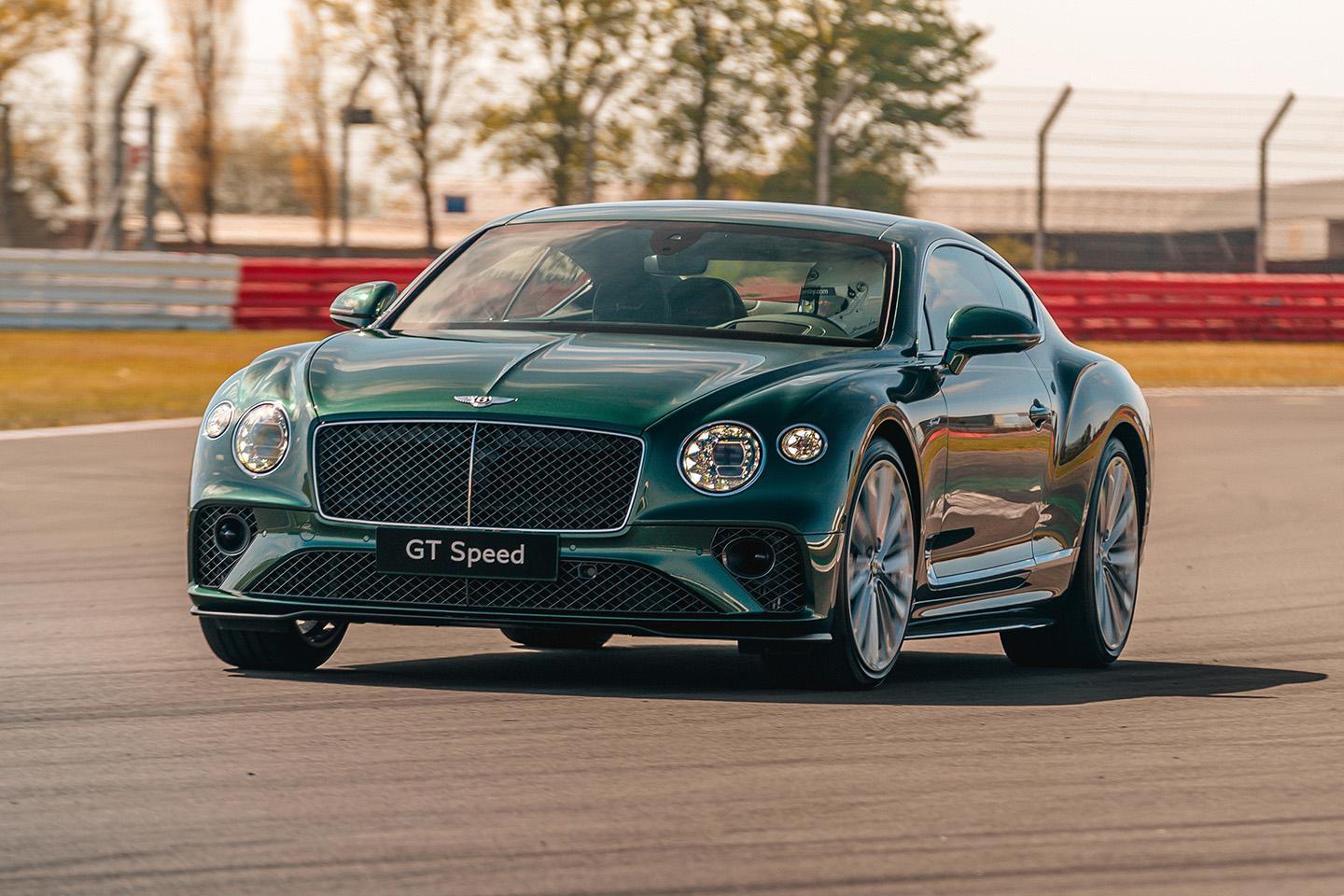 You won't be surprised to hear that none of Bentley's engineering team would use an expression as vulgar as drift mode when talking about the new GT Speed. Despite which it didn't take long for any conversation about the range-topping Conti's mechanical makeup and handling attributes to turn distinctly oversteery.

My drive was limited to five laps of the Silverstone GP circuit. But, before that, I was introduced to the revisions that separate the Speed from the regular Conti W12 by Florian Spengler, Bentley's head of chassis development. Everything was making sense until his claim that "we went for a more charismatic DSC setting in Dynamic mode." I obviously looked confused. "Charismatic, you know, a little bit loose," he explained, fingers manipulating empty air as if holding an imaginary steering wheel and applying a careful dose of opposite lock.

Oh, right - that sort of charismatic.

Granted, Bentley hasn't given the Speed the carefully modulated digital oversteer regulation of a true drift mode. But the very fact the company is promising both progressive rear-end breakaway and predictable over-the-limit manners is a definite departure for a brand that has long prioritised grip over slip.

But before trying my hand at the adventurous business of powersliding something which combines 650hp with a 2.2-tonne kerbweight, and which costs more than many houses, there's the chance to take in the mechanical changes which distinguish the Speed from the normal GT. A list which is considerably longer than the snazzier trim and turned-up-to-11 power output that characterised some earlier recipients of the badge.

While the Speed's engine is a definite highlight, it is largely unchanged. The 6.0-litre W12 is approaching retirement as Bentley moves beyond combustion - the company's last non-electrified powerplant will be made as soon as 2025 - and the Speed's statistics are only slightly enhanced from the existing version. New turbos increase output by 24 hp, move the power peak slightly lower and raise the unchanged 664 lb ft torque plateau slightly higher. Bentley claims a one tenth reduction in 0-62mph time - to 3.6 seconds - and a 1mph increase in top speed, to 208mph.

Similarly the Speed's air suspension, 48 Volt anti-roll system, double-clutch gearbox and settings for various other dynamic systems have been sharpened up and software tuned in traditional fashion.

But it also gets some exciting new hardware. The Speed gains the active rear-steer system that debuted on the Flying Spur, and which is here to enhance responses more than to tighten the turning circle. There's also an electronically controlled limited-slip differential at the back, this capable of biasing torque across the rear axle like the ones in the Aston Martin Vantage and DBX. Finally there's the option of carbon-ceramic brakes, a first for this generation of GT, with this bringing vast 440mm diameter front discs which are claimed to be the largest fitted to any road car.

Track introductions to spiky supercars are commonplace, but Silverstone is not an obvious venue to be meeting a new Bentley for the first time. Apparently the company hasn't been able to get the Speed certified for road use in the UK yet - the original plan was for a drive that would have proved the car's ability to also handle the real world. My five laps deliver the entirely unsurprising news that the Speed feels big and heavy on a circuit, but also that it does drive with impressive poise and precision for something so large.

On road the W12's velvet glove act is normally more evident than the steeliness of the fist that lies beneath; full throttle is only ever going to be restricted to small doses in a world where speed enforcement is a thing. But at Silverstone it had the chance to confirm both the hugeness of its muscle and enthusiasm for the upper reaches of its rev counter. It doesn't go past 6,200rpm, but it gets to the limiter impressively briskly in lower gears and makes truly savage noises as it does so, even when experienced through the padding of a race helmet. A 150mph terminal speed into Stowe at the end of the Hangar Straight was impressive evidence of the Speed's disdain for Newtonian physics.

Of course, few recent Bentleys have been short of the ability to engender velocity. But the Speed also proved equally adept at shedding it, and carrying an impressive amount of this pace into corners. The vast carbon ceramic brakes delivered as promised when it came to converting mechanical energy into heat, with massive power but precise responses under gentler loads, the pedal staying firm even after repeated big stops.

Steering felt similarly purposeful; hefty, proportional, delivering both copious grip and impressive front end bite. The Speed could be made to understeer in Silverstone's tighter corners, especially with the stability control fully engaged, but it is much less nose-heavy than other W12 Contis when changing direction. Like the active anti-roll, the rear steering adds its assistance almost invisibly, the car feeling planted when changing direction at high speed.

But the new active differential's cleverness is much more obvious. The Speed's all-wheel drive system is more rear-biased than the regular Conti, with the selection of Sport mode meaning that no more than 28 per cent of available effort can go to the front axle. But it is the torque juggling rear axle that really delivers the sense of the Conti being right-wheel driven, this overspeeding the outside rear wheel to help turn the car and also to give the exciting sensation of an impending rear-end breakaway, even some way short of the loadings that would actually make this happen.

Cycling through the Speed's ESC Sport mode, and then full deactivation, proved it could indeed be persuaded into actual power oversteer. The Sport mode was indeed charismatic, allowing a fair amount of yaw to build before any sense of intervention. And even with everything kennelled the Speed felt remarkably composed when pushed towards the sort of tail angles more appropriate for a Mk2 Escort than a Bentley. It's a neat party trick, even if one that very few owners are likely to experience regularly, if at all.

Other parts of the experience felt slightly less polished on track. Bentley has done a remarkable job of giving the Conti's double clutch gearbox the low speed manners of a torque converter auto, but that seems to also hold true under high intensity use where it lacks the punchiness of snappier alternatives. It is also impossible to brush the limiter, even in Sport mode and with the gearbox under manual control. The transmission will always change up - which is frustrating when close to a braking zone. And although the Speed's cabin is even plusher than the regular Continental, its beautifully hand-stitched quilted leather seats proved to lack lateral support under circuit loadings.

These are minor niggles, but Silverstone's hoonery left a more substantial question unanswered - the all important one of how the Speed will deal with the real world. Given the ability Bentley's engineers have already demonstrated to broaden the dynamic bandwidth of their models, I suspect the answer to that will be very well indeed. Be surprised if the Speed doesn't prove itself the best rounded, and most desirable, version of the Conti clan when it goes on sale later in the year.