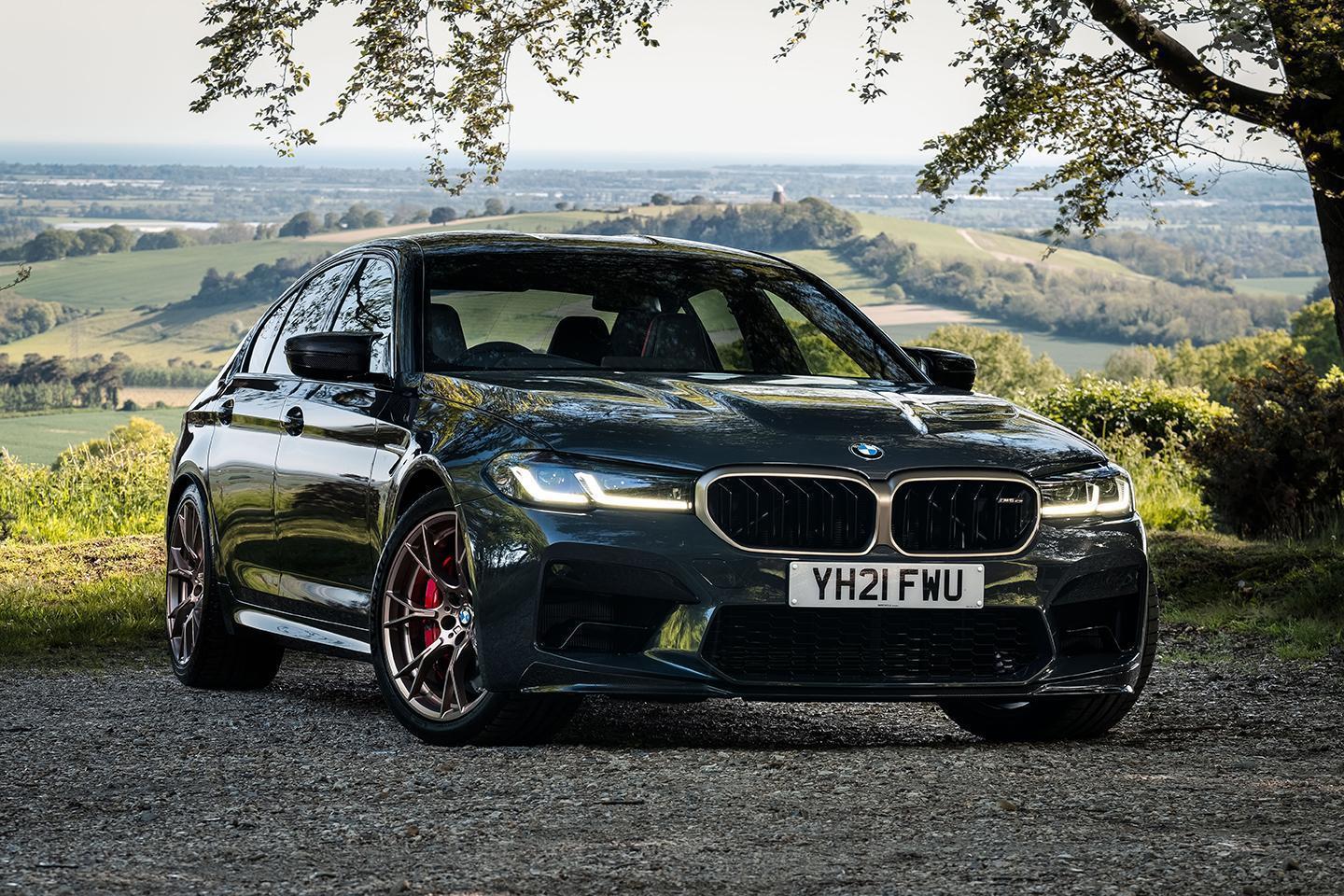 After four years and three derivatives - M2, M3 and M4 - the template for the BMW CS is well established. Arriving at the end of the lifecycle, it builds on the Competition M car with a little more power, some extra chassis focus, a set of snazzy wheels - and an extraordinary asking price. Given the quality of the Comp models and the work undertaken, it's been no surprise that the modern CS BMWs have been excellent - the M2 was one of our cars of 2020 after all - even if doubts lingered about value for money.

On the face of it, the M5 CS looks like more of the same. It has 10hp more than a Competition, the same gain that the M3 and M4 had, for 635hp in total (and most powerful BMW ever status); it has gold forged wheels, like those that have become synonymous with the M2; and it costs £40,000 more than an M5 Competition, or £140,780. Seems like any other BMW CS so far.

But the M5 is a little different. For one thing, the M5 is nowhere near the end of its life, having only been introduced in 2018 and very recently revised. Anyone a little more cynical than me might suggest that time is running out to make 635hp, two-tonne V8 saloons, and that BMW is seizing the opportunity before it's too late. Something like this car arguably doesn't sit well with the range of i electric cars coming on stream - by 2024, a CS might not have been possible. With that end-of-an-era status in mind (or perhaps just because it could) BMW has subjected the M5 to a more thorough overhaul than the other CS flagships. 70kg has been subtracted from the kerbweight thanks to standard ceramic brakes, those wheels and an incredible CFRP bonnet; four individual bucket seats have been fitted; the ride height is lower and the dampers reworked; a new exhaust and sound control are also standard; oh yes, and it'll do 189mph, which is normally an optional extra.

Even so, a 40 per cent price increase is a lot, and that does remains a concern - right up until the CS is sat in front of you making an M5 Comp look as exciting as a 530e. The modifications don't sound like much on paper (the ride heigh drop is just 7mm), but combined with the new splitter, the wheels, the bonnet vents, the carbon accents and, of course, the gold, it creates a proper sense of occasion in person. The CS is doubly menacing in grey, and yet also handsome as well - just how an M car should be.

For some, the interior will be everything that's wrong with this genre of car, i.e. a track focused version of a five-metre-long luxury saloon. The slender front seats are electrically adjustable, a Nurburgring outline is embossed onto the expensive leather, there's Alcantara on a wheel that controls radar cruise and wireless CarPlay... it's conflicted, basically, and it's easy to be snarky about the mixed messages based on pics. Yet the CS confounds a lot of pessimism in real life. The seats that look to have been borrowed directly from the new M3 are just as wonderful here, as comfy as they are supportive, and it's hard not to smile looking behind and seeing two very similar ones for rear passengers. The wheel feels great to hold and the driving position would shame some sports cars. It isn't £40k better than an M5 interior (that would be a tall order) but it's hard to imagine too many complaining.

To drive, the M2, M3 and M4 CS have broadly felt as they were: better Competitions on some sticky tyres. For the M5, on the other hand, it feels like more of a genuine step up from Comp to CS - given how warmly received the latest M5 has been should tell you a lot about how good this car is.

It feels no faster, though, let's be clear on that. Taking 70kg from an M5 is like taking the cherry from a trifle, and 10hp is obviously negligible when it was already boasting more than a Ferrari Roma. The stats show an improvement, of course, but half a second to 124mph (10.3 seconds against 10.8) can't make a meaningful difference. What does, however, are BMW's sound and exhaust tweaks; the 4.4-litre twin-turbo was never the most soulful of engines, but the changes for the CS have made it sound a lot more like a V8 to the driver, if not truly thunderous then certainly more melodic than before. Perhaps it's all a bit too smooth to be truly authentic, but this is comfortably the best sounding M5 using this engine. Only taken a decade.

Furthermore, not only is this CS the best driving M5 using this engine, but it might also be one of the best driving M cars full stop. It feels like all the learnings from the old models have made it to this car, with some influence from the new M3, all imparted onto the arguably the most competitive base model of all the CSes. So, yeah, it's pretty good.

The on-paper changes are modest, but the effects tangible: this is an M5 that's both comfier and sharper than a Competition, which is a supremely neat trick to pull off. BMW says the dampers have been reworked to accommodate the reduced kerbweight, but it's worth bearing in mind how much of the loss is in unsprung mass as well, and which have likely contributed to the ride improvement. The CS is still firm, sure, but appreciably more accommodating than the Comp or a new M3 in Comfort. Interestingly, the Sport suspension mode "suited perfectly to sporty driving on country and offers the ideal handling profile for laps of the Nurburgring" feels little different to Comfort in terms of stiffness. Sport Plus you'll only need to select to prove it's uncomfortable.

As for the other dynamic parameters, it's worth noting that the M5 does without the M8's Integrated Brake System (good), and that leaves powertrain, suspension, steering and 4WD to adjust. For the CS the best configuration seems to be as it was for the Competition (4WD Sport, sharp powertrain, comfortable everything else) though it's notable that this car just works better than the Comp. It feels more agile, steering with the crispness and clarity of a new M3 that's missing from the standard M5, and which gives enormous confidence - fast becoming a CS trademark. The seat better connects you to what the car is doing, the brakes feel even more immense with a tad less weight, 4WD Sport is no less exciting with a more focused set up, and yet it will still mooch home as comfortably as any other M5. All this on the incorrect tyre, too, the Pirelli P Zero Corsa the M5 is designed for swapped on our test car for a Michelin Pilot Sport 4S. So imagine how good it could be...

Put another way, the M5 CS feels an awful lot like the new M3 to drive - which is intended entirely as a compliment - with the added benefits of a more tuneful V8 and less punishing ride. Crucially, it honestly doesn't feel a great deal heavier than the 3 Series, being deft and lucid in a fashion that belies the kilos. And the fact that its changes seem more substantial than the other CS BMWs we've seen, helps to justify its premium - where previously it's felt like a set of Cup 2s might have you a long a way to the CS effect.

Even so, it's hard not to be dismissive about the idea of a £140k BMW 5 Series. Because, though tangibly better than the standard car, even the most ardent enthusiast would struggle to claim that it's vastly improved. What elevates the M5 CS, however, even above those special M cars that have preceded it and without driving it on track, is the intangible stuff: the way it makes you feel looking at it, sitting in it and driving it down a road - even at far less speed than it's capable of. Expect to lift the lightweight bonnet to show off 'M5 CS' embossed in the carbon, gawp at the yellow tinted lights, invite anyone who's interested to sit in the rear bucket seats and protect those wheels like your offspring. This is much more of an event car than any other M5. That it is also better to drive, and could well be the last of its kind, almost seem like fortunate by-products. And if you can't get over the price, it's worth bearing in mind that the Ultimate Packed Competition is only £20k cheaper. Either way, by journey's end you won't think to question the lavish cost. Which is probably the highest compliment the CS has coming to it.