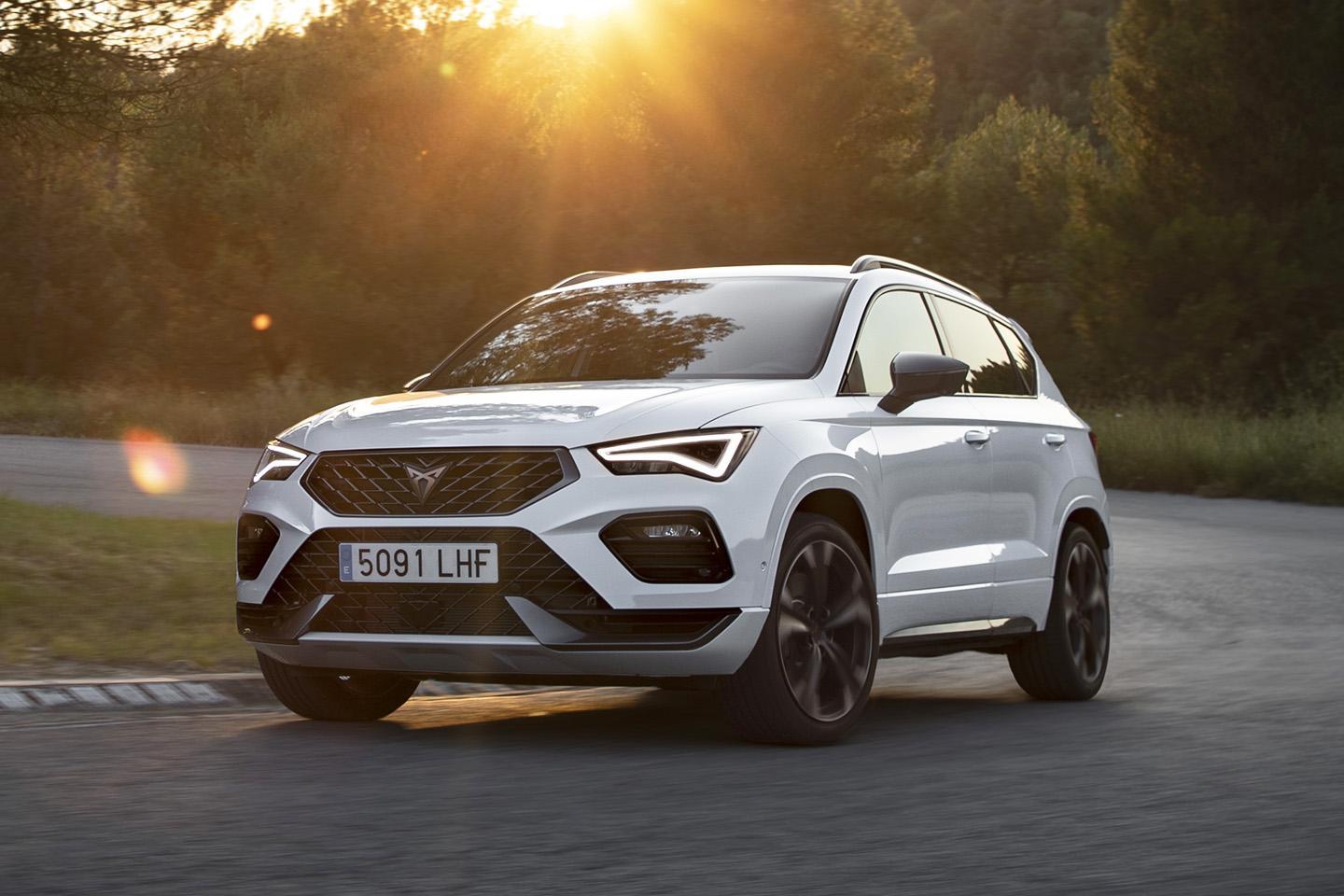 Times change awfully fast in automotive at the moment, and nowhere more so than the performance SUV sector. When the Cupra Ateca launched in 2018, there wasn't really anything like it, SEAT stealing a march on the opposition with a properly performance focused offering at considerably less than a Porsche Macan would cost you. And even if it wasn't the most engaging fast car in the world, nobody could deny the appeal to the buying public or the impressive timing. Because look what's happened since...

There's now a VW Tiguan, T-Roc and Touareg R, a 400hp Volvo XC40, a Ford Puma ST, a Mercedes GLB 35 AMG, an Audi RS Q3 Sportback, the Hyundai Kona N, a Porsche Cayenne Coupe and, of course, Cupra's own Formentor among others. All have launched since 2018, all attempting to tap into the insatiable demand for sporty off-roaders at various price points.

Given how much has changed in the sector in three years, it might be a surprise to learn that the latest Ateca isn't wildly different to how it was back then. In fact, it's not much different at all. Unlike the Tiguan R that's now it's most obvious rival, the Cupra does without the latest evo4 version of the EA888 engine (so it's still outputting 300hp) and doesn't have the R Performance Torque Vectoring, either. The most significant changes seem to be the "visceral acoustics" of an upgraded exhaust, cabin tweaks that include a revised touchscreen and new sports seats plus updates to steering and throttle calibration "to give the vehicle maximum agility and enhance feedback."

Sometimes, though, there's something to be said for not meddling too much. This is still a smart looking SUV, perhaps not as rakish as something like the Formentor, although handsome enough (and better for the deletion of the 'Cupra' font from the front grille). The copper accents probably prevent it from being truly subtle, but no-one is going to recoil at the sight of it. Indeed, given the horde which has followed, Ateca fits into 2021 as neatly as it did 2018.

Inside, it seems half new. The ventilation controls at the bottom of the dash are carried over unchanged, which some might be disappointed with given they've been refreshed in similar models and are still recognisable from a 2014 Leon. But they are at least functional in a way that the slider controls really aren't. A 9.2-inch touchscreen replaces the old eight-incher at the top of the dash; not only does an inch and a bit make a big difference to perceived size (make your own jokes), but the display is also crisper and - credit where it's due - more modern looking without buttons around it. With smartphone mirroring quick in the Ateca and HVAC kept separate, the two main gripes are dealt with. Elsewhere, the new seats are good, supportive and adjustable, with option of Petrol Blue leather in our top-of-the-range VZ3 car doing a good job of elevating the generally sober ambience somewhat.

Regardless of which Cupra Ateca you chose in the three-model line-up, all come with a 19-inch wheel. You may remember that all Tiguan Rs in the UK will be fitted with a 21-inch wheel, and that difference has a significant say on how each model drives. The Cupra's ride isn't perfect in any of its three modes (being perhaps a tad hollow in Comfort and a touch agitated when Sport or Cupra) but never does it bristle or jostle like the VW. An Ateca in its stiffest mode is barely less tolerable than a Tiguan in Comfort, if at all. The Cupra is just more relaxing and more comfortable more of the time, and the ability to traverse speed bumps without slowing down will surely be a trait not lost on its target audience. For what the typical fast SUV might be asked to deal with day-to-day, the Ateca feels better equipped than its VW equivalent.

Of course, where the Cupra then loses out is in the 'S' bit of 'SUV'. Though it holds a weight advantage over the slightly larger Tiguan (1,632kg against 1,746kg), the Ateca doesn't reward the keen driver as generously. Narrower tyres on the front axles mean a less positive turn in; outright grip feels a bit lower, too, and a less advanced all-wheel drive system means fewer options than the Tiguan R beyond that. Which, it should be said for the VW, are entertaining, as the torque vectoring powers the car away from the outside rear wheel. The Cupra, by contrast, always feels like it's pulled from a bend by the front, and never all that enthusiastically. Outright pace isn't in doubt, yet it remains a fairy one-dimensional experience.

Cupra's claims of updates are in evidence, however, with a steering system freed from much of the stiction that blights so many 'sporty' steering modes - this is now fine to drive in Cupra - along with an engine that sounds less artificial. Again, even the most aggressive drive settings don't make the noise insufferable, with the odd exhaust parp thrown in for good measure. Both serve to make the Ateca feel a more authentic driver's car than before, if no more thrilling. The Brembo calipers and larger discs that come with the VZ3 are nice, though aren't so brimming with feel and confidence through the pedal that they seem like a must-have.

That the Cupra falls short of totally compelling off the back of such a mild update is hardly surprising, but nor does it effect its status as a thoroughly recommendable choice. Perhaps it isn't the fastest, best looking or most dynamically sorted SUV out there, but it scores highly enough across the board to be eminently suited to most people's requirements. As ever, if you want a car that drives like a Golf R and seats five, an SUV that weighs 200kg more is never going to be an adequate substitute; you need to buy a Golf R. But as the more pragmatic, softer edged option, the Cupra's appeal is plain to see, combining SUV ease of use with decent all-weather performance and a reasonably accommodating ride. And while it is no longer the trailblazer - it seems almost entirely conventional these days - with space, performance and value still on its side, don't expect the new Ateca to be any less popular than the old one.