The new Golf GTI is pretty good - but might the more powerful and handily cheaper Cupra be even better? 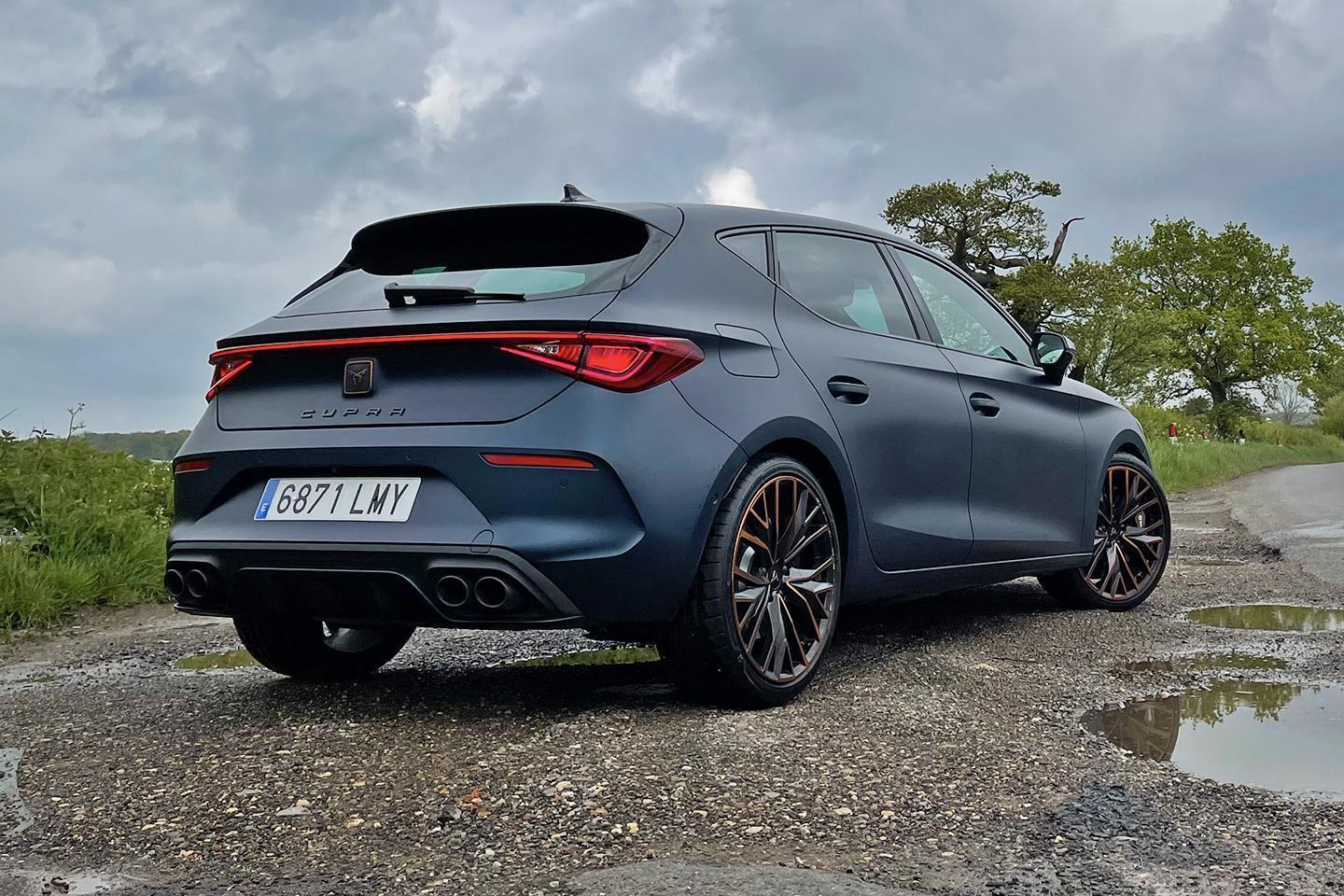 For as long as there's been a good Golf GTI, there's been a good SEAT Leon Cupra. In fact, even when the base car wasn't exactly inspirational - think Mk4 Golf - SEAT still delivered, the stylish, fast and desirable Leon Cupra of 1999 swiftly acquiring classic status. Need proof of how revered that car became? This low mileage Cupra R is for sale at £12k...

But this, in case you hadn't heard, isn't a Leon Cupra. It's a Cupra Leon - key difference. As a product of the sub-brand, the Leon is marketed alongside modish SUVs like the Formentor and upcoming Born rather than the more humdrum offerings like the Ibiza. And while it's easy to be cynical about a liberal application of copper alongside Petrol Blue leather, it does at least ensure the Leon is now much more confidently distinguished as a performance derivative than before. The previous Cupra was almost demure for such a fast car - you couldn't even have a yellow one - and there's no danger of that this time around.

Underneath, however, this is much as we've found with previous Leon flagships: Golf platform (though with key equipment like the DCC dampers as standard), Golf engines (albeit with more power, here a Clubsport-equalling 300hp) and Golf dimensions, making for something more compact (if less accommodating) than a Civic Type R.

Unfortunately, that also means a Golf interior. And there's no escaping the fact: its key functions lack both the responsiveness and intuitiveness for use when driving. Standard smartphone mirroring mitigates a lot of the confusion, but that seems a weak fallback. Adjusting air-con settings shouldn't be this distracting on the move. And it would be hard to say conclusively this feels a better built Leon than before, with a few iffier plastics where they really shouldn't be seen in a £35k car - especially when the old car kicked off at £27,000.

That said, the Cupra holds a couple of key advantages over the Golfs we've tested so far. First is the steering wheel, with physical buttons in place of haptic ones and a drive mode selector attached to the spoke; not only does the latter make the Leon feel a bit like a supercar (the little things count), it also ensures navigating the four drive modes - Comfort, Sport, Cupra, Individual - is far simpler than in the Golf. Furthermore, the button that first resembles the starter, sat ahead of the DSG selector switch, is actually for the ESP - no frustrating journey into sub menus here. Both differences imply a more driver focused remit, and definitely set the right tone before going anywhere. Certainly an advantage for the increasing number of buyers who purchase before trying.

They really should, however, not only to be sure of their decision, but simply because the Cupra driving experience is a really enjoyable one. On occasion it's easy to get lost in the minutiae of assessing a fast car, and losing sight of the most important aspect - i.e., is this an entertaining steer? The Cupra Leon, though obviously not without flaw, most certainly is. It doesn't matter if you're lost in Milton Keynes (again), if the heavens have opened in May (again) or if left-hand drive means you can't really overtake that tractor, because the Cupra is just a very well sorted performance car. Sometimes it's nothing more complicated than that.

The car defaults to Comfort on start-up, where it's as agreeable, comfortable and capable as any of this latest batch of MQB Evo cars: the seven-speed DSG is seamless, the 2.0-litre turbo murmurs along and the light steering is pleasingly accurate. What's important, however - and which the Golf does too, it should be noted - is that the more aggressive drive modes amplify what's good, rather than just gratuitously crank everything up for effect

Alright, so the 'Cupra' setting remains tough. But the steering never acquires overbearing weight, the throttle doesn't become a kickdown switch and the augmented noise, if not soul stirring, doesn't seem to be the irritant it once was. There are even some authentic-sounding crackles and pops from the exhaust. Combine all that with a brake pedal that's firm and progressive (potentially helped by the standard Brembo calipers) and reasonably substantial shift paddles and the Cupra is a satisfying car to interact with as you go a bit quicker.

Moreover, as with the Golf, there's a really capable chassis under the copper accents. With an ESP system that's more convient to set to a Sport mode it's easier to exploit, too, with strong grip giving way to fairly neutral balance - this isn't a Megane wannabe - and enormous traction from the VAQ-assisted front end. The tenacity of the driven wheels is becoming a trademark of this generation; a system that once lacked the immediacy of a mechanical LSD now feels proactive and mightily effective. This Leon puts down additional power and torque significantly better than its occasionally wayward predecessor, encouraging the driver to accelerate sooner and feel the car consume the corner through its front Bridgestones, greedy for another chance to show off its ability. Maybe the limitations of this setup will be exposed on track or in worse conditions, though it's hard to fault on this experience.

It helps that the Cupra is really quick. The old Leon had the spec sheet bragging rights of more power, but torque pegged with the Golf GTI meant there was precious little difference on the road. Now the power is matched with extra torque, the totals of 300hp and 295lb ft significantly ahead of the 245hp/273lb ft standard GTI. Which costs the same money. Obviously, the difference isn't night and day, but the Cupra does feel speedier, the impression aided by short ratios - second changes up automatically at little more than 50mph. Is a manual missed? In short, yes, because if you're going to be a bit friskier than a Golf, why not got the whole hog and supply three pedals and stick - even if this remains a perfectly acceptable dual clutch. But it's hard to make a case for old school technology in a brand shouting about its plug-in offerings, about to launch its first EV and which has already built electric racing cars. Perhaps more to the point, they don't sell; of the 69 previous-gen Leon Cupras for sale on PH, just 13 are manual.

As a hot hatch for 2021, then, the Cupra Leon makes a very strong case for itself. Those who buy into the Civic Type R way of doing things, or the riotous entertainment value of a Ford Focus ST, will continue to have their heads turned. But for the majority of buyers in the segment, those looking at the Renault Sport Megane, newly updated Hyundai i30 N, BMW 128ti and, of course, the Golf, the Leon should absolutely be on the shortlist. Fast, stylish, good value, decent to drive and better than the Golf in some areas, it's hard to find much meaningful fault with at this price. Apart from the interior. Don't say you weren't warned...