Finally - a chance to sample the track-bias Mach 1 on the road. Find out if it was worth the wait... 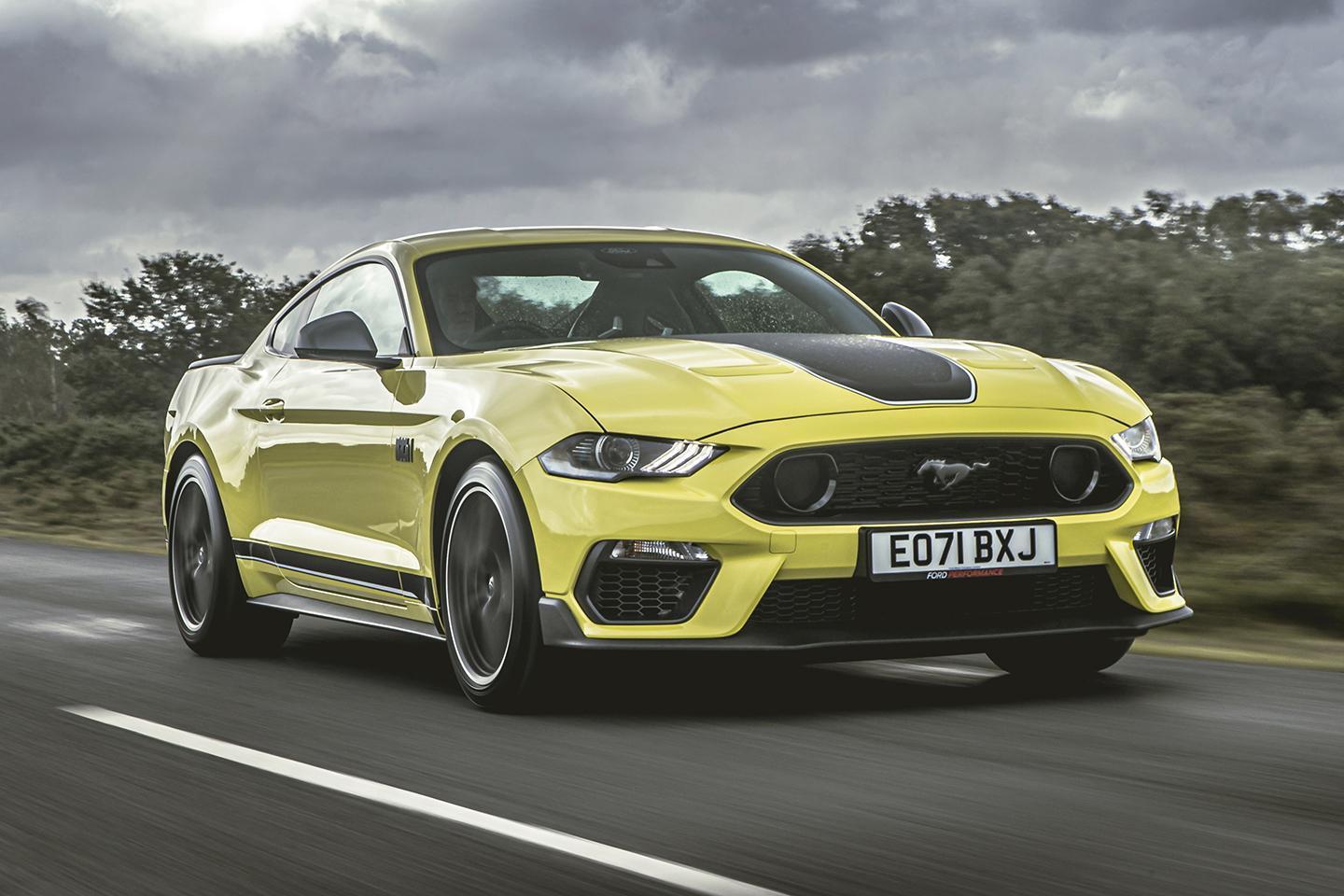 If you're after the ultimate, current-gen Mustang, which would it be? The hammer-blow Shelby GT500 - still the most powerful production Ford to date - or the more scalpel-sharp Shelby GT350 and GT350R? Well, it's a moot point. Neither was available through any official UK channels. The Mustang Mach 1 is, though. The nameplate is making a return to the Mustang lineage after a nigh-on two-decade hiatus, and, for the first time, Ford of Blighty is quite happy to sell you one - if you stump up the requisite £55k, that is.

The premium buys you a more track-focused Mustang, but one that's still very much a road car at heart. That means there's no alarming power hike for the 5.0-litre Coyote V8: we're talking 460hp at 7,250rpm - 10hp and 250rpm higher than the GT. Maximum torque is unchanged at 390 lb ft. The subtle increase is brought about using an Open Air Induction system - basically a less choking air filter fed by one of the distinctive snouts in the front grille - and 87mm throttle bodies. Those help get the air in and, post combustion, a specially tuned active exhaust with 4.5-inch tailpipes, help the gases get out. The engine mapping has also been tweaked to meet its new fuelling requirements.

Being more track-focused, there's additional cooling for the engine, the limited-slip diff and the lightweight, Tremec six-speed manual gearbox. In fact, the gearbox oil cooler is from the GT350, while the GT500 donates the Mach 1's rear diffuser. That's claimed to add 22 per cent more downforce and, when combined with the bespoke rear spoiler, provides a balanced aero loading front to rear. Completing the mechanical overhaul is a raft of suspension and steering changes. The EPAS and MagneRide 2 dampers have both been recalibrated to suit the Mach 1's stiffer subframe bushing, springs, anti-roll bars and revised toe links.

So, have the changes gone too far or not far enough? Well, after driving the new model on the road and around Thruxton's multitude of high-speed, off-camber corners, I would say the improvements have done just enough to live up to the billing. The Mach 1 is clearly a better-honed Mustang, but the GT's unique, rough-diamond charm hasn't been erased, nor its appealing sense of fun.

The Mach 1 is stiffer, for sure. There's more niggle on broken roads, although most of that wanes the faster you go, so it's cruising abilities remain pretty much intact. And to make up for the slow-speed ride issues, you get a superior level of rear-axle control. This Mustang is far more stable off crests than the GT, and a lot less likely to break traction as result - even more so thanks to the clawing capabilities of the Michelin Pilot Sport 4 tyres that shroud its fetching 19-inch five-spoke alloys.

That pays dividends on big-dipper B-roads, but even on a relatively smooth track it allows you to ride the curbs with more gusto. Through the high-speed sections you can still feel the Mustang's 1,851kg portliness take effect; it may have less flex in its rubbers and roll from its springs, but you still have to wait for the body to settle. When it does though, there's a pleasing neutrality to the Mach 1 - one you can still wipe away in an instant with a quick tap of the throttle, should the mood take you.

Cutting out some elasticity from the suspension has added more bite to the steering, and the Mach 1 doesn't need as much of a chivvy up to get the nose turned in. There are still some issues, though. The Mustang has never had the braille-like ability to transmit grip levels up the column, and, despite the EPAS remap, the glutinous feeling as you move the steering a few degrees off the straight-ahead remains. From then on it feels nicely weighted, at least, and of the three selectable modes, Comfort works best on the road while the extra heft of Sport adds welcome reassurance on the track.

Unsurprisingly, the Mach 1 doesn't feel any quicker than the GT - but that probably won't stop you falling deeply in love with the Jekyll-and-Hyde Coyote V8. Low down, it's awash with torque. Gear changes can be few and far between if you're happy to bathe in its lazy, guttural induction notes. But it'll shed any veneer of old-school V8 if you go in search of the 7,500rpm limiter. Once past 4,500-5,000rpm, just keep the throttle buried with intent and you'll feel the change - a far ruder exhaust tone combined with a serious sprint toward the limiter. It's impossible to grow tired of it.

The Tremec 'box is also a delight. Yes, the clutch is heavy and the stubby gear lever needs a firm hand to move it through the gait but the effort is far from exhausting. It's rewarding. It adds to the sense that you're at the heart of an analogue machine, pulling levers and making things happen. Frankly, it would be a crying shame to opt for the ten-speed torque converter instead.

The Mustang Mach 1 is mostly a triumph, then. Yes, I'm guilty of forgiving its flaws, but only because cars of this ilk are so rare these days. I won't tell you it drives better than a Porsche Cayman, because it couldn't and doesn't - yet the Mustang adds an intangible, immeasurable sense of occasion to any drive, and to that the Mach 1 adds some welcome poise should you want it. Start to push on and you'll feel it start to shrink around you, which is novel in any Mustang. Until the road narrows by a foot, that is. Then you'll remember (quite quickly if you're to avoid losing a door mirror) that this is a wide car as well as a heavy one - fully 115mm wider than a Cayman, in fact.

At that point, it's usually best to stop trying so hard and look around you. Because then you get to bask in a cabin that's like the 60s with airbags, the Mach 1 plaque with the chassis number above the glovebox, the white ball gear knob centre stage, and of course, the rumble of a naturally aspirated V8 all around you. Certainly it's worth celebrating the opportunity to be able to buy any Mustang in 2021, let alone the Mach 1. But for the latter, as well as being the first time it's available in the UK, it'll probably be the last. Which means this might be as good as it gets.