A 3 Series, A4 and C-Class rival comes next for Genesis - can it compete? 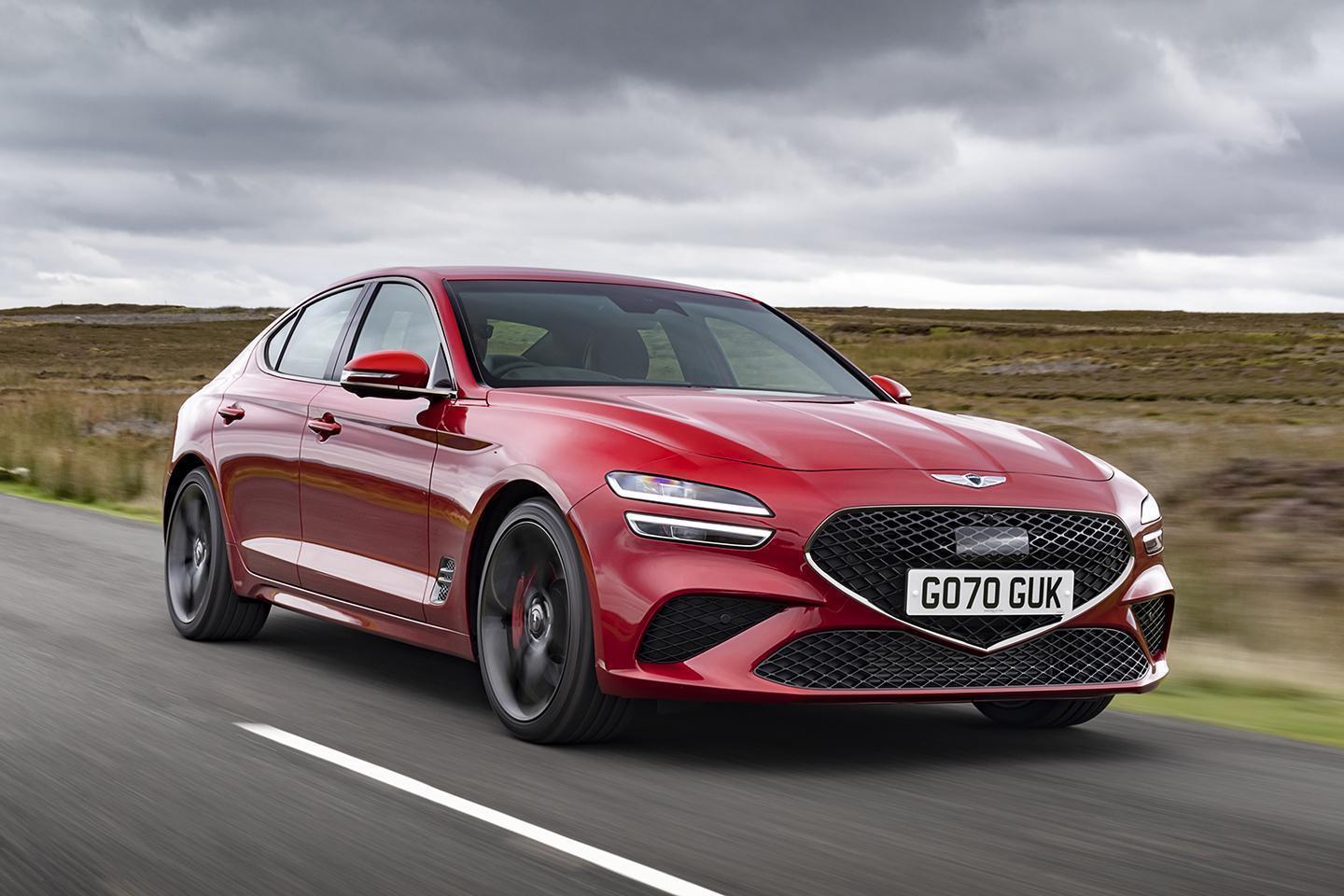 The list of cars that have tried (and largely failed) to muscle in on the compact exec patch occupied by BMW, Audi and Mercedes over the past 25 years is long - and not exactly illustrious. Think Volvo S60, Saab 9-3, Lexus IS, Alfa 159 and Infiniti G37 to name a few. Not necessarily bad cars, but each unable to unsettle the 3 Series, C-Class and A4 from their perches at the top of the sales tree. In the UK we like our holidays Spanish, our curries Indian - and our saloons German. There's seldom any deviation from the norm; see cars as talented as both the Jaguar XE and Alfa Giulia for proof; they're both among the best four-doors ever made by their manufacturers, yet remain comprehensively outsold by the unassailable Teutonic triumvirate.

Despite all this, Genesis is the latest entrant to try its luck in the fiercely competitive sector. Alongside this G70 saloon is a GV70 to take on the GLC, Q5, X3 and whatever other SUVs has been launched this week, plus a G70 Shooting Brake designed specifically for Europe. That should be one to look forward to.

Until then, it's the four-door, offering the same attractive business model as the larger '80 models. You pay your money (anywhere between £33k and £40k, before options, for the G70), and for five years after that everything is taken care of. As in everything. When it needs a service or MOT, Genesis will collect and return it; every software, map and connected service update is included until 2026; there's 24-7 European roadside assistance, too. Maybe they aren't very PH concerns, but we all like to feel special buying a car, right? That the G70 offers the same luxury car experience found in the £60k offerings for little more than half surely counts in its favour.

Furthermore, the range line up looks conspicuously (and attractively) simple by the standards of the class. There's a diesel one and the petrol model tested here, both four-cylinder and both with rear-wheel drive and an eight-speed auto (thought sadly not the V6 you can have elsewhere). There's a Premium, Luxury and Sport specification on both, and some option packs on top. When BMW offers a 3 Series range that includes (but isn't limited to) three levels of Pro - SE Pro, Sport Pro and M Sport Pro - a simpler line up feels like a blessing.

But if every well equipped, well-priced saloon had been a success against the big three, the market would be crammed with junior execs. And we all know it isn't. The Genesis needs subjective appeal as well as on-paper credentials to lure buyers away, and on that score it's more of a mixed bag. Though the Genesis design language probably works better here than the larger models, it isn't a joy to look at in the way a Giulia might be, or expertly resolved like an A4. It's just nice to look at in a fairly generic fashion. A less kind social media commenter suggested the G70 was no more distinctive than a Grand Theft Auto saloon, which frankly isn't too wide of the mark. Once you know what a Genesis looks like, it's recognisable, but until that point...

The interior is easier to praise; it's logically laid out and looks good, combining screens and buttons well. It feels really well built too; the driving position is adjustable every which way and the seats are superbly comfortable. Even the wheel is thin and round, like a steering wheel. Yes, some parts are familiar from Hyundais and, no, it's not as glamorous as something like the latest C-Class, but for a starting price of little more than £30k there won't be many complaints (though the test car was heavily optioned, so wasn't representative of the cheaper models). Even after a brief drive, it's easy to imagine spending many a happy mile behind the wheel.

Covering distance is something the G70 is very good at, in fact, with a focus much more on blissful refinement than searing dynamic aptitude. It cruises along at less than 2,000rpm with precious little wind or engine noise (and only a tad from the 19-inch wheels), the Lexicon stereo is excellent, every control you need (and very few you don't) are within easy reach and every option on the configurable dash display is clear. Which is more than can be said for some rivals. It's easy to imagine cars like the G70 living their lives on the motorway, and hard to think of many better than this.

It's a shame, then, that the powertrain isn't as effortlessly impressive. Of course, a 2.0-litre, four-cylinder turbo is par for the course at this non-hybrid end of the market, as is an eight-speed auto - but it feels that rivals simply offer better versions of the pairing. Neither petrol motor nor gearbox feel that responsive, which means you end up goading it with more throttle - ending up in the gruffer enginne speeds. And when you are after more urgency in Sport mode, the auto seems reluctant to change down, at least until the middle of a bend when picking up the throttle again. Acceleration is brisk enough, but 245hp and 260lb ft can only do so much against more than 1,700kg (a 'minimum mass in running order is quoted at 1,675kg). The Genesis just feels about average from an engine and gearbox perspective.

In some ways that will feel a bit irrelevant, because the G70 is a capable (and likeable) cruiser - and any attempt to stray away from that identity simply underlines the powertrain's shortcomings. It has Brembo brakes and Michelin Pilot Sport 4 tyres at each corner, the former delivering great pedal feel and performance, the latter loads of grip and readable behaviour beyond - but plainly such concerns aren't what the Genesis is about. It's enough that it's not a lumbering barge.

Nevertheless, value aside, it does leave the G70 without a notable USP. It cruises well but would do an even better job of that with a big diesel that isn't currently offered, it looks good but not sensational, it drives well but not memorably. The G70 is good enough and good value, but it's packed into a class of cars already doing more than one thing brilliantly well. For evidence of its future struggles, consider the fact that it's not the only £40k Korean entrant apparently always seen in red - remember the Kia Stinger? With its lusty V6 (the one denied to UK G70s), distinctive looks and smart handling, it delivers a more intriguing alternative to the class norm, and yet is not what you'd call a smash hit. So while this is merely a decent opening salvo to Geneva's arrival in the UK - don't forget that the Shooting Brake is coming - this probably isn't the car to lure buyers away from their preferred German saloon just yet.