Korea takes on the European establishment where it counts - can it succeed? 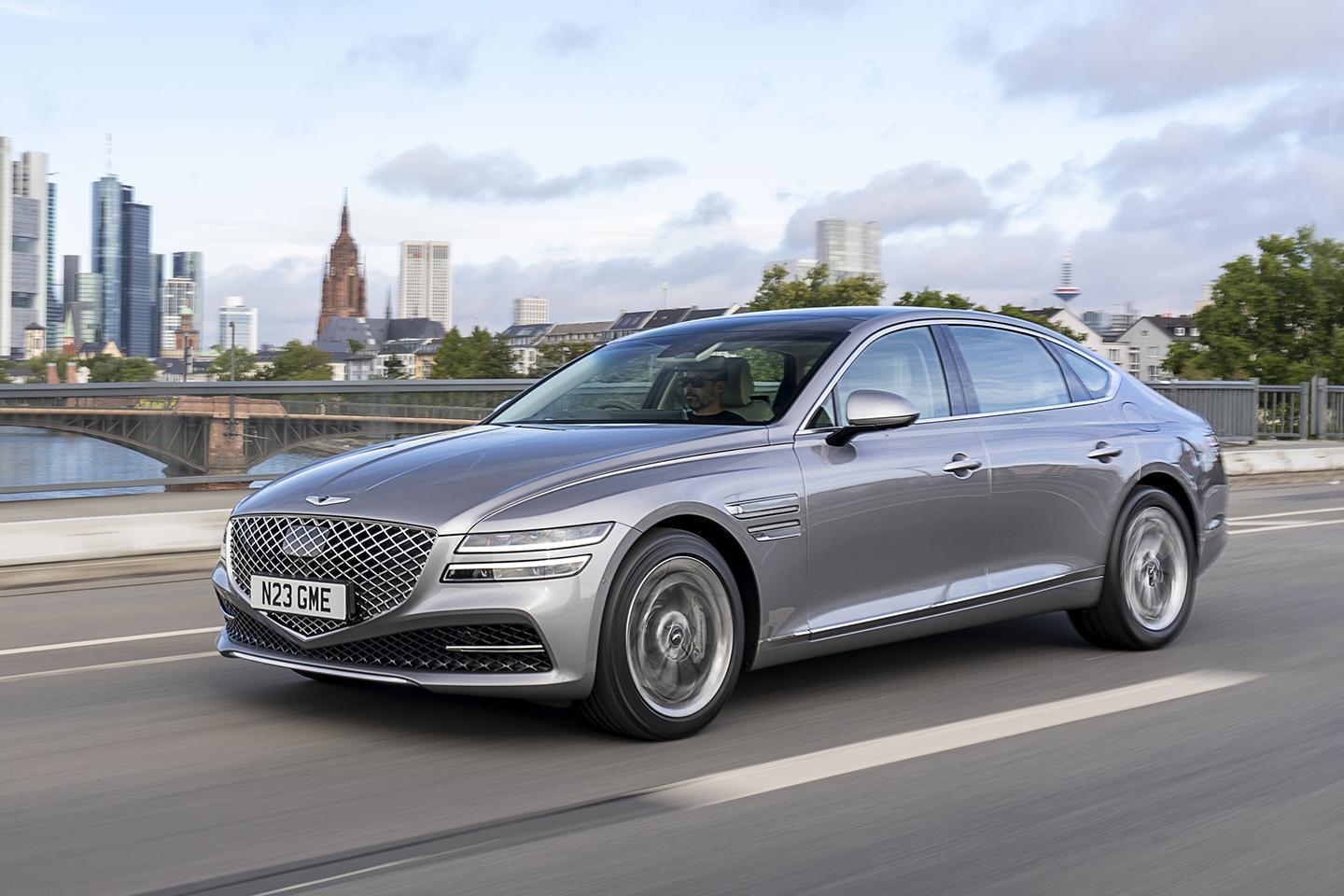 For a brand purporting to offer something very different in the marketplace, one that doesn't follow the crowd and has "the confidence to be different", you'd be forgiven for thinking the Genesis product offensive looks awfully familiar. There's this car, the G80 saloon, set to take on the best that BMW, Mercedes and Audi have to offer with four-cylinder petrol and diesel power, launched alongside the GV80, a Cayenne-chasing SUV seemingly fit for a lifetime of inconsiderate parking at the kerb. If you were going to take on the Germans at their own game, it would be with an executive saloon and a big SUV. But where's the USP?

In the buying and ownership experience, says Genesis. Its business model is apparently built on 'service above sales' and the prioritisation of the customer above all else. Buyers will be assigned a Genesis Personal Assistant for the journey from speccing to delivery (including a handover), who will then remain point of contact for servicing and warranty queries for the first five years - both included in the purchase price, of course. An unparalleled customer experience, in other words - which is a laudable aim if nothing else. But it also makes a first drive as representative of that whole experience as an online viewing of a new-build townhouse - there's a lot more to learn about the purchase down the road.

Still, it's not often there's something totally new to drive in such a competitive sector, so the G80 opportunity was not to be passed up. In the UK, buyers will be offered a 2.2-litre, 210hp diesel or a 304hp, 2.5-litre turbocharged petrol, both with four cylinders. Spec choice is fairly simple by the standards of the class: Premium or Luxury are available, the latter carrying a £5k supplement, with four option packs (Innovation, Comfort Seat, Executive and Nappa Leather, the first only available on Premium, all on Luxury) on top of that. Obviously there's the colour and leather to think about, the only other individual upgrades then being a sunroof and a stereo upgrade.

With every single box possibly ticked, you end up with a £61k Genesis as tested. Which is quite clearly a lot, even if it seems unlikely many will end up at quite that much. In person, the G80 is fairly handsome, larger than might be expected at 4,995mm long but still well proportioned. Genesis's two-line design language that we'll see on all models certainly marks it out, though a few of the details seem a bit... American. A bit too shiny and a bit too chintzy, especially against cars as subdued and as handsome as the BMW 5 Series and Jaguar XF. It's distinctive, at least, which ought to be commended.

The interior is far better. Its sheer size means more than adequate space for occupants in the G80, and they're treated to a lavishly specced cabin. Though some of that ambience has been optioned in - not least with the plush leather and rear seat entertainment - there's a quality to the standard materials and the way the Genesis is assembled that bodes well for the cars that cost £20k less than this one. Everything operates with a reassuring slickness and precision, from air vents to door handles to window switches, and perhaps just as crucially, everything makes sense. There are buttons where you would expect and want to find them, including the slightly bulbous wheel, and decent quality screens throughout - the central 14.5-inch one being particularly nice. Perhaps Genesis central controller takes some getting used to, but that's virtually always the case. Should customers take the plunge on a Genesis without driving one - as could happen, given the focus on studios rather than dealers and test drives only from home - the interior will likely be responsible for more than one buying decision. Which is plainly the motivation for creating a really lovely space.

Those customers that do opt for a test drive will find an experience broadly unfamiliar in the segment, because the Genesis isn't really sporting in the slightest. Those expecting a Kia Stinger with seat massagers will be disappointed; those wanting serenity on four wheels - an S-Class experience for E-Class money - will find plenty to like. Alongside a full decade of European development, Genesis employs something called Road Active Noise Control in the G80 (think noise cancelling headphones) and certainly it seems to contribute to the excellent rolling refinement, with barely a hint of tyre noise. Though the suspension can be adjusted - with Nurburgring tuning, no less - the G80 always remains pretty cushy, never tensing up like the competition would. On this experience it feels that the car might have been set up on the smaller 19-inch wheel though, the 20s causing the odd disturbance and pitter patter that's at odds with the calm everywhere else.

Regardless, the G80 has the feel of the car perfectly suited to long distances, on any kind of road. There's the tranquillity of the driving environment (with a nice driving position, too), but also a subtle yet satisfying response to control inputs. No, this isn't a 5 Series or an XF - yet nor is it a totally detached driving device. The steering is light but accurate and nicely attuned to the chassis behaviour, while the brakes are powerful and progressive. Michelin Pilot Sport 4 tyres ensure huge grip, even if the G80 never seems entirely at home being hustled. Clearly work has gone into it dynamically, isolating the driver from a lot of what's going on but not to the extent where they feel excluded - which is a worthy compromise.

It's a shame then that powertrain is not more inspiring. It's seldom that a four-cylinder turbo is, sure, but a two-tonne kerbweight makes the 2.5-litre engine's job even tougher. Some initial hesitancy can make pulling away abrupt, and overtakes require a gear lower (and more noise) than might be expected. Unsurprisingly, sedate driving suits the G80 best, with imperceptible shifts and admirable smoothness given the layout, and 304hp and 311lb ft - and the six-second 0-62 time - probably stack up more favourably when not labouring under such a large price tag. But it's no more than adequate regardless. The V6 diesel deployed in the GX70 would likely be a better fit, and the incoming electrified version will surely suit the car's supreme quietness. We'll report back on the four-cylinder diesel alternative.

Overall, though, it's easy to look approvingly on the Genesis G80. In a sector obsessed with an often misplaced sporting pretense, a car narrowly focused on sense of occasion and refinement is a welcome break from the norm. The warmth and comparative richness of the interior ought to count for a lot. That the G80 also looks good value if carefully optioned, and is nice enough to drive, will do it no harm either.

Furthermore, while it's obviously too early to tell if the Genesis ownership model will have an impact, it isn't hard to see it flourishing. After all, who wouldn't want their car maintenance dealt with by the same person every single time, with collection and drop off from home? The brand says "it has optimised car ownership so customers need never visit a dealer again" - which will doubtless be music to some disgruntled ears.

Nevertheless it will need an almighty effort to crack the established hegemony. The Genesis way has enjoyed some success in America, where top flight customer service is a prized asset. In the UK, the premium segment is first and foremost about status, and the German brands have consistently repelled any effort to make inroads into their market share. They will not fear the latest insurrection, no matter how clever its marketing push. That said, it's worth recalling that Ford and Vauxhall disregarded Hyundai's thrown gauntlet twenty years ago, only for wider circumstances to hand the newcomer an unexpected advantage. By the same token, many months of social distancing might yet make Genesis's smoothing of the buying process seem wholly inviting. On this evidence, the saloon at the end of it all is decent and different enough for people to at least consider casting their usual prejudices aside.