Is the i20 N the car to knock the Ford Fiesta ST off its hot hatch pedestal? 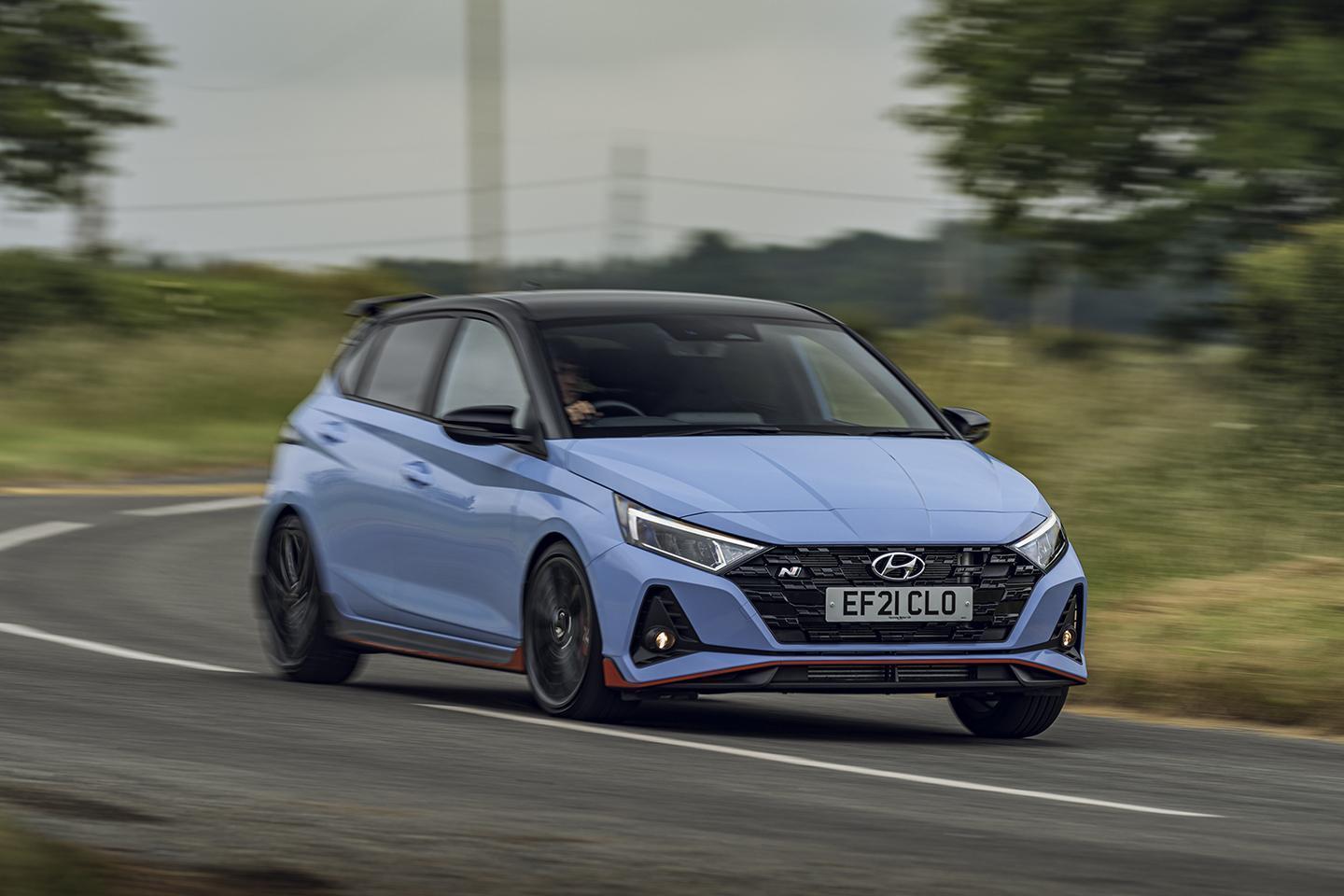 In a world where sports cars won't sell without automatic transmissions, SUVs are made more efficient with battery packs and a BMW M3 weighs 1,800kg, there's something reassuringly familiar about a compact hot hatch. A decade ago, a Renaultsport Clio made around 200hp, weighed 1.2 tonnes, and came only with passive suspension and a six-speed manual. In 2021, a Hyundai i20 N has 204hp, a 1,190kg kerbweight and fixed rate dampers alongside its newly toughened-up six-speed gearbox. Yes, the big atmospheric engine has been replaced by a smaller turbo unit, but the message is clear: the fundamental recipe didn't need changing much, so those after traditional hot hatch fun need look no further.

Only there's no quick Clio to pit the Hyundai against now; there's little by way of any rival, in fact, with Renault, Peugeot and Vauxhall all having vacated the sector. Only one very clear alternative remains in the Ford Fiesta ST, a test you can read about very soon.

Until then, we have a Performance Blue i20 N on its own. And we'll deal with the obvious bit first. Though odd styling is no barrier to hot hatch success in a way it might be with, say, convertibles or luxury coupes, the Hyundai isn't what you'd call a looker. It's hardly like the traditional hot hatch cues are absent; on the contrary, there might just be too many. There's red pinstriping, a purposeful bodykit, chunky wing, big wheels, the obligatory diffuser... and it all feels a bit much on the little i20. With dramatic slashes down the flanks as well, the N is busy - frenetic, really, at the back.

It might not be to all tastes, let's put it that way. Although it should be said that if something this try-hard can work anywhere, it's in the supermini segment, where the buyer demographic is typically younger than in the larger C-segment that the i30 competes in. The single exhaust pipe would be a nice modest hint at the i20's potential were it not for, you know, the whole rest of the car.

The interior is far more successful, with a good driving position, a vast central screen and buttons where you would want buttons to be. It feels more contemporary than the i30 N, too, with a TFT display configurable with drive mode. And if a flaming tacho sounds a bit silly written down, it seems a welcome bit of pocket-rocket silliness in reality when you hit the steering wheel-mounted N buttons. Certainly this interior is more befitting of a £25k asking price than the Fiesta ST, and that's important.

On the road, much is familiar from the i30 N experience - and broadly speaking that's a good thing. In fact, the rough 'n' ready character probably suits the i20 better, and is just what you need when it's the neck-scruff Fiesta ST in the opposite corner. There is more subtle appeal as well, however; the brake pedal feel is great, clutch and gearbox are nicely weighted and the steering - at least in its least aggressive setting - is well calibrated. There's enjoyment to be had from driving it slow as well as a million miles per hour.

Well, mostly. The low-speed ride is pretty firm. Again, it suits the juvenile nature of a small hot hatch, but is something to be aware of before you hit your first sunken manhole cover. Though configurability is once again rife in this Hyundai N product, with engine, exhaust, steering, ESC, and rev matching tweakable through three settings each (and that all feels less in keeping with the norms of the genre), the suspension isn't something that can be altered. And there are times you might want to.

But that is probably to be expected. Pick up the pace and the i20 N is brilliant, spirited and engaging like the best front-wheel-drive hatches. There's really strong traction and grip, aided by a standard limited-slip diff, for driving fast and neat, yet not so much that the Hyundai can't be coaxed into more impish behaviour. If not as flamboyant as the Fiesta, the i20 is willing to be adjusted with the throttle and brake in entertaining fashion. Perhaps more importantly than any other kind of formal assessment, the Hyundai is a giggle, the kind of car you drive a bit too fast all the time because it's such good fun to do so.

There are a couple of problems, though, the engine most notable among them. Sadly the 1.6 suffers from the same issues as the 2.0-litre found in the i30 N; though performance is competitive, the unit is suspiciously unwilling to rev even at middling engine speeds and boomy at points. Downsized engines in dinky cars may have been ruined for us by the steroidal three-cylinder special found in the much pricier GR Yaris, but Hyundai's four-pot is too humdrum for its own good. The car wants to have its door handles driven off; the engine doesn't.

The last gripe is probably more personal. Put simply, it seems gratuitous to have so many modes to choose from in a car with a manual gearbox and passive dampers. The actually very good rev matching doesn't need a mid-way setting between on and off, just as a supermini can do without three steering modes, especially as Sport and Sport + are wantonly heavy. For a back-to-basics hatchback, we'd have been happy for Hyundai to pin its colours to a single mast. For what it's worth, the same seems to apply here as everywhere else: sporty engine, sportier exhaust, steering in Comfort and the ESC set to a permissive Sport mode. Away from a track, you can safely disregard anything else.

Nevertheless, despite a less than inspirational engine and too many modes for its own good, the i20 N is a cracking a little hot hatch. Though clearly inspired by the i30 N template - offering good fun and great value - it's arguably stronger in its class thanks to an even more entertaining chassis and less talented competition. If the job of a small, fast car is to put a grin on your face, the i20 N is a resounding success - it need be no more complicated than that. Is the grin wider and toothier than in the Fiesta ST? We'll find out soon enough.