Don't think an auto has any place in a hot hatch? Try the new dual-clutch i30 N... 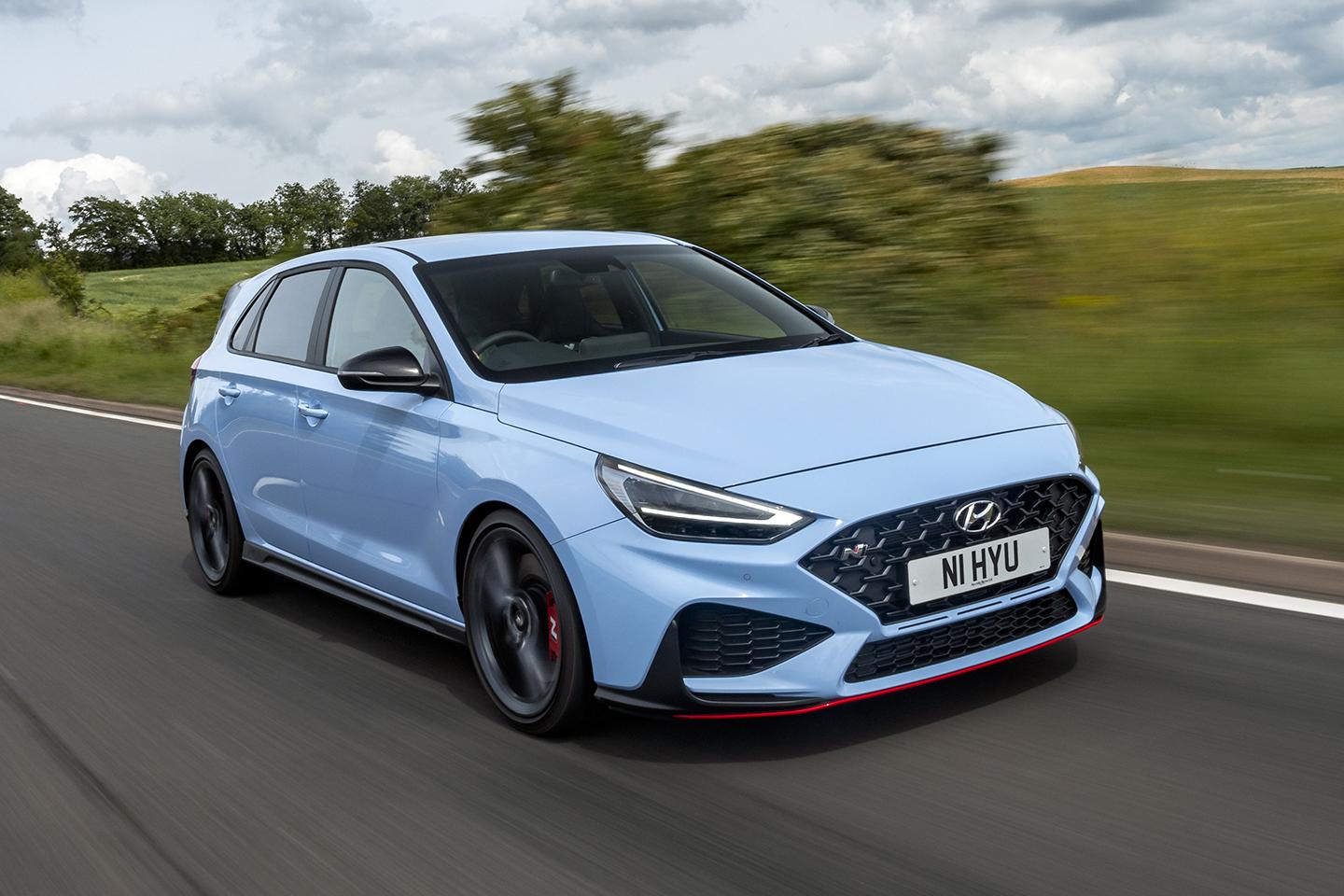 Fans of manual hot hatches could rightly feel a little hard done by right now. Because while cars like the Civic Type R and Focus ST continue to fight the good fight, the DIY gearbox is more often newsworthy for the line-ups it's omitted from rather than welcomed to. It's no longer available in the Golf R, Cupra Leon, Audi S3 or Renault Sport Megane, and the BMW 128ti was launched exclusively with an automatic, too. Hatchbacks like those seem a lot more likely than the manual only GR Yaris...

The problem is compounded by so many half-arsed attempts at incorporating automatic gearboxes. Whether it's through fitting nasty paddles, incorrectly configured levers or manual modes that are no such thing, it can often feel like an auto takes away more from the hot hatch experience than just a clutch pedal. Ford even went so far as fitting a torque converter auto to the Focus ST both slower and less efficient than the manual like it was 2003 all over again. We're not anti-auto - far from it - but we are against not trying very hard. Lots of auto hot hatches can feel like afterthoughts, at least from a driver engagement perspective.

The newly revised Hyundai i30 N looks to cover all the bases. It's offered as standard from £33,745 with a six-speed manual; for £1,500 extra, buyers can have an i30 with a dual-clutch auto for the first time. It's the car we drove in prototype form last year, now on UK roads, in right-hand drive (even if the pic is still LHD).

There are encouraging signs before going anywhere. The automatic lever has a prominent place in the centre, and is nicely set for manual changes; the lever is moved towards the driver, then pushed up for downshifts and pulled down to go up. Just like a 911 GT3, and every race sequential in history. It doesn't take up loads of room, either, with phone storage still available ahead of the stick itself. The metal gearshift paddles are prominent and well positioned, with two pedals just where you'd want them in the footwell. It all sounds elementary but is so often overlooked, which is hard to forgive in driver focused cars.

Opt for an automatic i30 N and you'll enter a whole new world of Hyundai acronyms, including NGS (N Grin Shift), NPS (N Power Shift) and NTS (N Track Sense Shift). They sound a bit gimmicky, and in truth probably are - but they do point to a manufacturer considering the ways in which a car might be enhanced by an auto. Like Porsche's Sport Response for PDK, NGS uses a wheel mounted button to immediately set the car to its most accelerative - lowest gear, sharpest throttle - for 20 seconds. It's useful for overtakes, or if a series of bends opens up, especially with eight gears when you might want second or third. NPS is equally welcome, preventing a torque interruption when going up the gears with more than 90 per cent throttle; on the road it means a surge with each upshift that makes acceleration feel more vivid than it is.

In addition, before anyone says these are all juvenile observations - yes, the shifts lights are still great and manual mode will nerf the limiter too - the i30 N DCT works well as an automatic. Having eight gears against the manual's six means it can cruise at fewer revs, for starters; given the i30 N's 2.0-litre known is known for being both a bit coarse and inefficient, being able to pull 2,000rpm in top at the national speed limit will be handy. And it means 0-62mph takes just 5.4 seconds, half a se... Sorry, yes, sensible. In the Eco setting the auto is as unassuming and mellow - striving for eighth quickly and serenely - as it is fast and furious in N mode. Hyundai hasn't published figures yet, but it must use less fuel than the manual. The N DCT is a very hard automatic to fault.

Plus, of course, it comes fitted to one of the most entertaining hot hatches out there. By Hyundai's numbers the dual-clutch adds 35kg, which isn't enough to have any effect on the driving experience. The i30 N is a born hooligan, riding quite firmly, making loads of noise, and goading you into every bend just that bit faster - the DCT hasn't changed that one bit. In fact, without the need to manually change gears, the driver can focus on working the brakes and limited-slip diff a little more; both deliver strong outright performance as well as plentiful feel through the pedal and the wheel. Perhaps an engine that isn't the revviest means last second downshifts hardly fizz through, but the 'box itself is more than accommodating of late requests.

All of which means the i30 N DCT presents a very attractive case for itself. Those gripes we've levelled at rivals around tactility and engagement are answered here, which will surely make them even more aggravating in future. We're not asking for Ferrari-style paddles and a touring car lever in five-door hatchbacks, but a good automatic can be both easy and engaging to drive, which the i30 has conclusively proven. Perhaps more than in any other offering, this new N gearbox makes the decision between manual and automatic hot hatch harder than ever. Let's hope buyers can continue to choose for a little while yet.