The Fastback gets a mid-life spruce up and a DCT auto - is it still the lovable rogue of 2017? 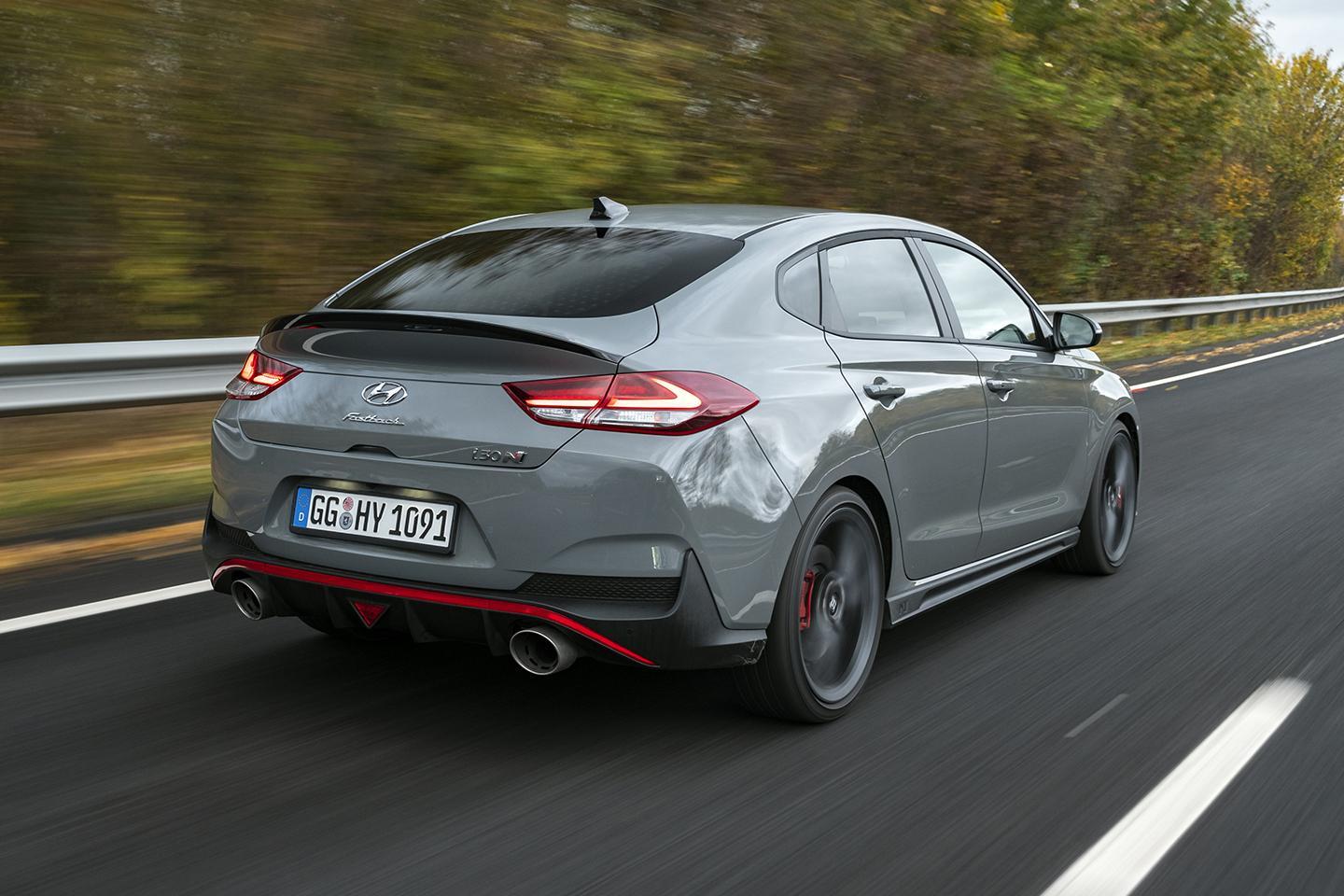 In the most positive way, the Hyundai i30 N seemed anachronistic at launch in 2017 - a new hot hatch from a bygone era, almost. It was offered exclusively with a manual gearbox, for starters, as automatics were gaining in popularity; it was quite naughtily vocal in any of its 1,944 possible drive mode configurations; on the road it often felt a feisty and boisterous and old school - an attitude neatly matched by its iffy fuel consumption. It was not a hot hatch to cover every base and blend into the background: the i30 N was about sheer entertainment value, and on that score it excelled, because it was enticingly affordable as well. For not an awful lot of money you got a whole heap of fun, and who cared if the interior didn't rival a Golf's? It was thousands of pounds less.

With 25,000 Ns already sold across Europe, it could be argued that the i30 didn't need much changing. On the other hand, time moves fast on planet hot hatch, with a facelifted Megane due, the updated Civic Type R on sale and a whole swathe of new MQB-derived rivals imminent - the Hyundai needs to stay relevant if nothing else. So it's been tweaked, subtly but meaningfully, from top to bottom. The steering and suspension have been reworked, the brakes are bigger, there's more power and torque from the 2.0-litre turbo, a refreshed interior and new equipment.

Perhaps most notable of all is the inclusion of an eight-speed DCT option for the very first time, giving the i30 N an automatic comparable to those in rivals like the Focus ST, Leon Cupra and Megane R.S. It's the same wet clutch unit as first seen in the Veloster N that the UK doesn't receive, and promises to "provide the engaging experience of a manual transmission with the convenience of an automatic transmission". Be in no doubt: the automatic is the standout feature of what could be a significant facelift; if the i30 N can retain the scallywag charm of the original, while also adding an extra veneer of civility and usability with the two-pedal transmission, that 25,000 number could grow pretty rapidly...

Our early pre-production UK drive - deliveries are due in the spring - was in a left-hand drive, Fastback DCT. In primer grey on a dank and miserable autumnal Thursday, it isn't the most inspiring thing to look at, though the new forged wheels look good and the redesigned DRLs are more modern than the grille-mounted items offered before. More significant improvements come inside, with a much larger, seemingly much brighter, optional central screen and additional Performance Blue stitching to jazz up what is ultimately still a slightly dour cabin. Still, there's very little wrong with it - as criticism continues to mount regarding the Golf 8's attempts to redo the interior, so having simple buttons in logical places for ventilation makes a lot of sense.

As for the inclusion of the DCT, there are some points of note before moving anywhere: there are good ones - the wheel mounted paddles are large, and the lever is correctly configured for manual shifts - and some less positive ones, with a brake pedal that seems a little offset to the right and a lever that seems more suited to a family SUV than a hot hatch.

Pleasingly, the i30 N still barks into life and settles to a grumpy idle; mid-life overhaul or not, the Hyundai hasn't suddenly mellowed out into a Golf R wannabe. That bears out in the initial exchanges, too, the ride firm even in the regular damper setting and giving off the impression that the car would rather not be trundling around the suburbs.

The automatic most certainly is content to, though, the DCT easily as good as we've come to expect from this transmission type in recent years. It upshifts decisively and swiftly, always in the right gear for any situation and shuffling up the ratios at urban speeds with precious little interruption. There's just the right amount of creep for traffic, as well as the awareness to hold gears when using a bit more throttle; handy when creeping through the jam becomes a dash to get the green light...

Fear not, however: the i30 N hasn't suddenly gone all demure and placid just there's no clutch pedal. Press the 'NGS' button - that's 'N Grin Shift' in Hyundai speak, which sits where the rev match button does on manual i30 Ns - and the car will immediately drop into the lowest gear, with the shift speed set to its fastest for 20 seconds. Potentially useful for overtakes, mostly handy for the barrage of exhaust explosions as you're immediately at thousands more rpm, shift lights ablaze, with a 20-second timer ticking down like you're playing a TV game show on four wheels. It's far from strictly necessary, the NGS - especially given how swift the DCT's kickdown is - but as a concession to people who derive some joy from engines and driving, it's a nice touch. In an automotive world that feels more serious than ever, the N Grin Shift is fun. For that reason alone, it's a worthy inclusion.

That's far from the end of the dual-clutch's party tricks, either. Unlike so many others, it won't kickdown in manual mode and it won't shift up either, the rev limiter free to hit for as long as you want to pretend you're 19 again. The paddles have been thought about, too, rather than just being buttons affixed to the back of the wheel; they look good and are well sized, though could perhaps do with a little more resistance in their travel to increase a sense of connection and reduce the arcade game feel. Same for the gear lever itself; pulling back to go up and pushing away to go down is another entertaining way to change gear (and one denied to buyers of the latest VWs with the weird switch selector), but it could perhaps do with a bit more weight behind the action.

As before, the i30 N features a host of drive modes - Eco, Normal, Sport, N and N Custom - which work well with the new transmission. Because in the less aggressive settings it'll shuffle up to eighth for a sub-2,000rpm motorway cruise pretty quickly; arguably grabbing seventh a little too easily for overtakes, but it certainly makes for the most refined i30 N yet. Ramp it up to N and the i30 seems almost allergic to upshifts, holding onto to every ratio for all its worth and never going higher than sixth. Which, when you're in the mood, is perfect, because it's always alert and eager - and the driver is then only a button press from settling the transmission back down again. If anything, the modes actually make more sense in the automatic than the manual, because they have an even more discernible effect on the car's overall behaviour. What a shame, then, that optimising the N Custom mode to your preference has become even trickier than before, sub-menus now displayed on a weird spider graph that's fiendishly difficult to adjust accurately while driving. The screen may have grown in size, but this - along with eliminating buttons - qualifies as a demerit.

Fortunately for Hyundai, it's one of precious few. While a direct comparison would be the most revealing test, this seems to be an i30 N that's better to drive than ever. Traction feels improved, the assists more intelligently calibrated and the chassis better honed than before, all without losing that transparent dynamic character which has always defined the i30 N. You aren't in for any surprises, but you are in for a lot of fun.

Granted, the additional power and torque are impossible detect, although that's no great bother because it was fast enough already. Instead we have a more rounded and more broadly capable i30 N, and the deeply impressive dual-clutch and some chassis refinements compliment that. Of course, it's hard to be definitive without the car yet in full production trim, but the signs so far for the i30 N DCT are very encouraging indeed.