Can a mild facelift keep Mini's 231hp JCW on the boil? 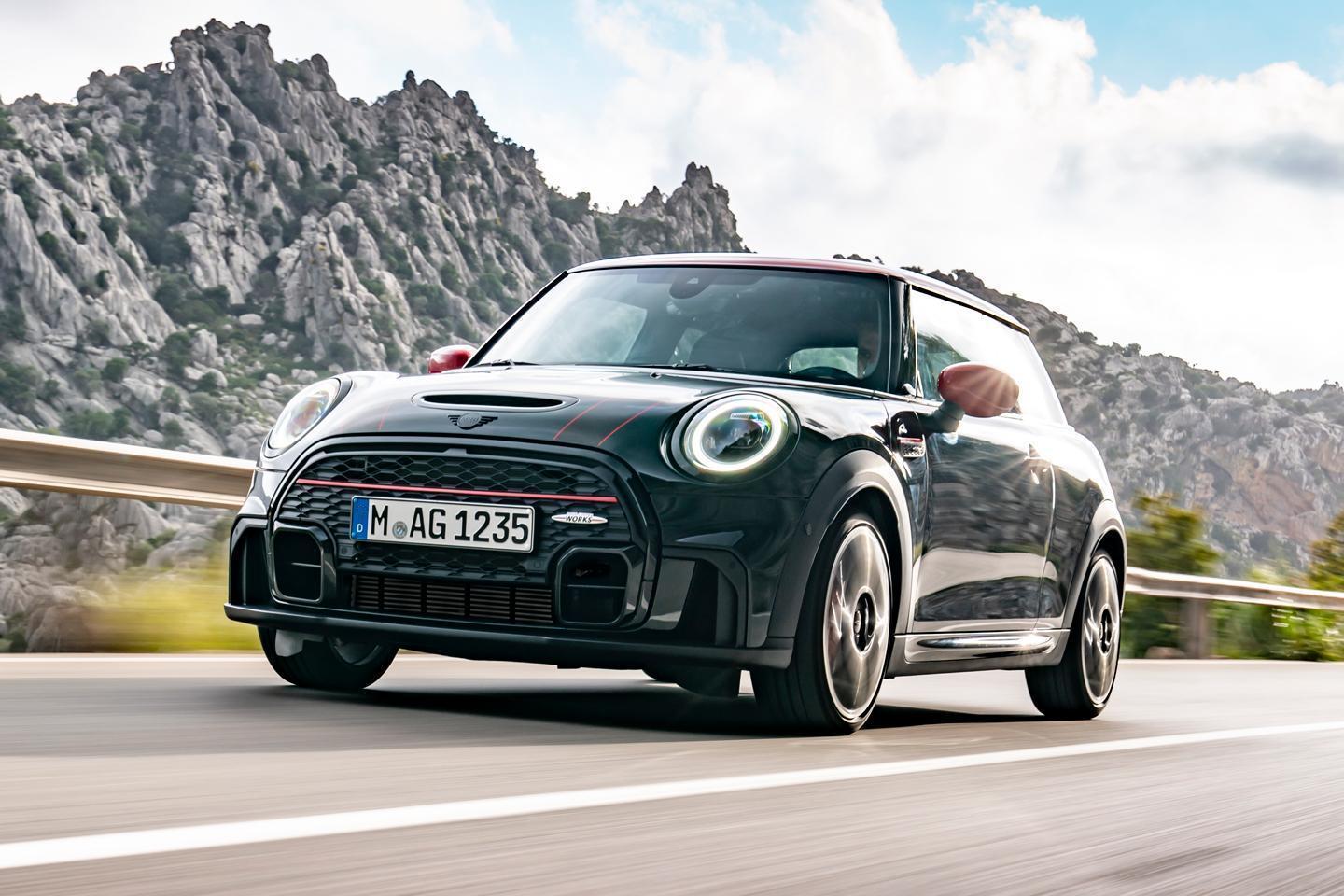 Perhaps it’s a sign of the times that BMW’s first Mini is enjoying renewed appreciation. Frank Stephenson’s interpretation of the Issigonis original wasn’t universally loved at the turn of the millennium, but as cars have swelled and gained frowns, the R50’s plucky, curving shape is to many now a classic design in itself. That the newest version, which has just been updated for 2021, largely stays true to the form is telling of the BMW Mini’s longstanding popularity. Although you don’t need to get up close and personal with an F56 to know this is now firmly a product of premium status.

Honestly, you’d be forgiven for completely falling for the prospect of Mini ownership within five seconds of climbing aboard. The experience of sitting in a car with a windscreen perched on upright A-pillars, swells of bonnet and wheel arch visible just over the steering wheel and round instrument cluster to your left feels wholly unique. The new aesthetic tweaks look great and I'm a big fan of the interior upgrades, but what matters most is the Mini's ambience remains wholly intact. Albeit with features like a USB C port and digital instrument cluster.

Much of the facelift’s updates are centred (quite literally) on infotainment tech, which is predictably sharper and faster and as aesthetically appealing as ever. You get all the usual suspects, although somewhat surprisingly given it’s now standard on BMWs, Apple Carplay remains a feature only included when the Navigation Pack is ticked. Maybe that’s not so out of tune with the lineage; the BMW Mini was the original ‘customisable’ car for the masses, after all. You can certainly make a car your own, with everything from two-tone roof paint, seat and trim patterns, and even those Union Flag lights customisable. Apparently, the British flag illumination is a popular standard feature in all markets, but not all. A simpler light design is also available.

On a global scale, though, clearly the British-built hatch remains fashionable enough to face an ever-growing number of rivals. Nowhere is the battle hotter than at the performance end of the Mini line-up, where the John Cooper Works, complete with its 231hp turbocharged four-cylinder engine, has recently added the i20 N to its dartboard, alongside the Ford Fiesta ST. While the Hyundai has not yet officially launched, its price is expected to be about £25k, which just so happens to be about bang on the money required for a basic Mini JCW three-door. Handy, that...

Mini’s sub-GP offering is easily the most powerful car of the trio, though, and with BMW hardware aboard, it’s also the plushest by some margin. In Rebel Green, it looks appropriately aggressive outside, and the retention of the larger B48 motor (surely on borrowed time now), not to mention the instantly sporting, jiggly chassis setup will be immediately familiar to anyone who has driven a recent JCW. The F56 is unashamedly firm, to the point of being quite unrelenting over steep speed humps - but with pace comes greater fluidity from the damping. The chassis eggs you on from the get-go, although the eight-speed Steptronic transmission in our test car (a £1,700 option) is content to amble at low revs.

That said, and despite the fact the Mini three-door weighs less than the Fiesta ST (but not the i20 N), the powertrain needs to be worked before it feels JCW-quick. Sure, it’s easily better than the average car on the road, but versus the punchy delivery of Ford’s three-pot and the tractable supply of torque in Hyundai’s 1.6, the Mini’s 2.0-litre feels engineered in tandem with its chassis. It needs to be thrashed in other words, not providing the shove you’d expect for the on-paper stats until the digital needle is rushing towards 6,000rpm. The gearbox is apparently aware of this trait, and always opts to downshift briskly in auto mode.

It’s worth switching to manual mode in the Steptronic car (three pedals are still standard), because the transmission reacts swiftly to the thin but extended paddles, mounted on the back of the wheel. There’s no snap or crackle from the exhaust, but you do get a shove in the backside with every flat-shift. It’s a trait carried over from BMWs with the same ‘box, but it feels more appropriate here, in a car that is inclined to joust with a B road in a way that highlights its positivity and abrasive front end.

As before, the powered axle is the JCW's sniffer dog, and it will dart toward corners with no little enthusiasm. You’re well aware of the car leaning into a bend, because those upright A pillars act like a gauge against the scenery as the outside front tyre loads up. It’s at that moment that the JCW feels keenest and most reactive; a trailed brake or additional flick of the wrists will induce the characteristic fast-Mini slide. It's so familiar by now that in contrast to the hunkered down i20 N or hyperactive Fiesta ST, the JCW almost seems like the traditional option.

Still, well-established strengths aside, the second quickest Mini never quite entertains as much as the three-door Ford, and nor does it feel anything like as serious as the new i20. Some of that is to do with the engine, which is undeniably starting to feel its age when measured against lighter, fresher rivals. Obviously a Steptronic 'box does it no favours on the cut-and-thrust front, but it still seems there's some gusto missing from a supermini which claims to output 231hp.

Still, the Mini JCW range does retain one notable USP: a convertible variant. It's much the same as the hatch, albeit with a slightly slower change of direction. No doubt that’s due to the added weight of a drop-top shell, as well as the obvious loss of some rigidity. Although it should be said that the structure felt very stiff indeed, only showing tiny signs of vibration in the rear-view mirror over seriously rough, broken surfaces. Inevitably wind and road noise are more noticeable, but credit where it's due, even at motorway speeds, the volume is more than acceptable for a sub-£30k offering. For buyers wanting a mix of blue sky motoring and hot hatch performance, this remains the only option worth considering.

As for those who prefer tin on their tops, the JCW is more fashionable and tech-laden than ever in F56 form - but it's still overshadowed by others for top-end driving entertainment. Then again, given the quality of the class leaders, to run them close while offering a more upmarket feel is arguably all the JCW needs to do to ensure continued success in the showroom. For the most part, the 2021 John Cooper Works still delivers what you expect of it - and that includes feeling generally smug about the BMW-grade surroundings. Much like the R53 did.