Limited edition model marks a quarter century for the Boxster; it's seldom been better 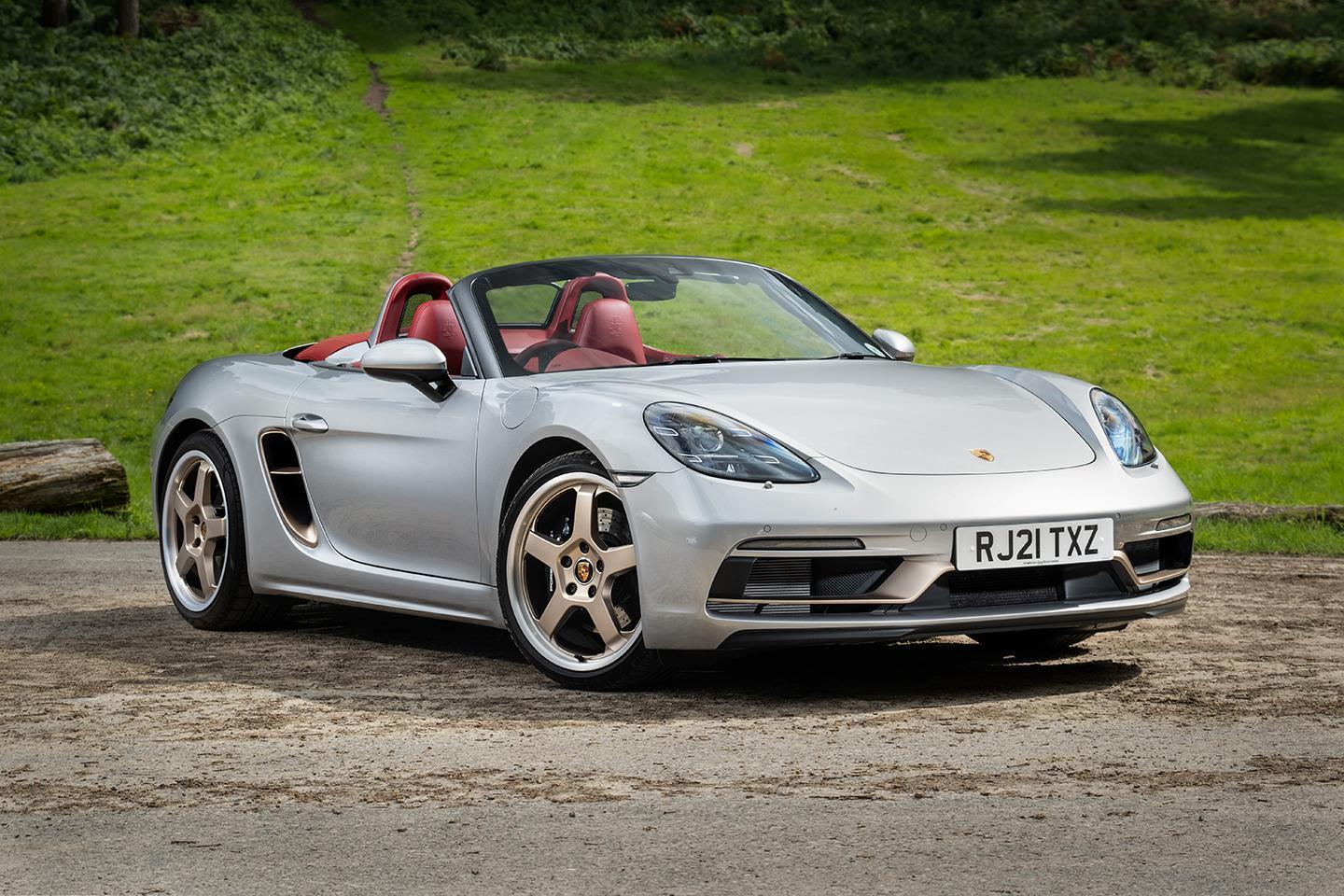 The anniversary special edition is nothing new, and neither is the treatment that it brings: some snazzy paint here, nicer upholstery there, maybe a new set of wheels and - if you're really lucky - a bit of extra power. Plus, of course, the badges - an anniversary car wouldn't be complete without some insignia to remind the driver how old they already were at launch.

On paper, the Boxster 25 Years looks like more of the same. Though marking a quarter century of production, the car pays specific homage to the 1993 concept car, with unique 20-inch wheels, GT Silver paint (black or white also offered), new front and rear aprons in Neoydyme (the same gold as the wheels) plus Bordeaux leather for the full throwback vibe. Or black, for those who prefer things a little more modest. Plus a smattering of 'Boxster 25' badges - natch - including in the rev counter, on the cup holder cover and beneath the rear spoiler. So far, so standard.

Only it isn't. Because however good the 25 Years looks in the pics, it is even better in real life. It's dramatic and attention grabbing in a way that Boxsters never quite are - the Spyders notwithstanding. The wheels contribute a lot to that; there's something especially attractive about the new five-spokes beyond the usual Midas touch. A 10mm drop over a standard 718 further helps the just-so stance. Perhaps the additional Neodyme details aren't quite as successful, though this remains surely the best looking GT Silver Boxster there's ever been.

Red inside and for the roof makes the 25 seem even more exotic - it really pays to be brave here and avoid the black. Lovely details abound, too, like the 'Boxster 25' in the hood, the tiny inscription in the aluminium trim stating which of the 1,250 cars yours is and the fact it doesn't say '718' anywhere - this one is a plain old Boxster, and proud of it. The changes are relatively subtle - it stops some way short of the Spyder - but makes the look worth every single penny, if not more, of its premium over a GTS.

Which is handy, because the drive is, of course, identical. Well, as far as could be told; as standard a GTS is 20mm lower than a regular 718 Boxster, whereas this 25 Years is only 10mm closer to the ground. Though the full 20mm is possible via a £168 tick. (GTS buyers can apparently opt for a 10mm drop at no-cost). Which is slightly confusing. But the car is assuredly not: there remain precious few mid-engined chassis better than this, and certainly none below £100,000. It's a joy in the GTS, and it's a joy here. With the sun shining and flat-six howling, there are not many cars better to drive than a high-spec Porsche Boxster - as it has been for quite a while now.

It is seemingly vice-free, blessed with enormous composure yet a supple ride, great urgency with complete civility and immense purchase with just enough feedback as well. The Boxster is pretty much everything a driver could ever ask for in a mid-engined chassis, and still laudably free of much wobble despite this architecture having been in production for quite a while now. Where the equivalent Cayman faces direct opposition from cars like the Alpine A110 and the Lotus Emira, there's nothing really to take on the Boxster's array of talents. It would be hard to think of what could, really, given the way it so impeccably blends its rear-drive chassis with a gold star powertrain.

This current GTS flat-six has almost twice the power (400 vs. 204) from another litre and a half of swept capacity (4.0-litres against 2.5) than the first Boxster of 25 years ago. That is still manages to feel like a relatively slender and nimble mid-engined Porsche - not one dominated by an enormous engine - is testament to what's been achieved with the car over two and half decades. But it leaves an indelible mark nonetheless; perhaps not sonically as it once might have, but in the response and inertia-free delivery that only atmospheric engines can provide. You'll want to use more revs than are strictly necessary because it so relishes high engine speeds; it's really in its groove from about 4,500rpm onwards. What a shame it remains, therefore, that the gearing so severely restricts those opportunities. Yes, it's a gripe that feels as timely (and as tired) as whingeing about the ending of Lost, but doing 84mph in second gear remains daft. So the moaning will continue.

Mercifully there's very little else that detracts from enjoyment of a Boxster 25 Years. Some might think the interior looks a little old hat nowadays, given it's basically the dash design the 981 launched with in 2012 and lags behind the current Porsche crop as far as wow factor is concerned. But fact is, it's a logical, high quality, well sorted driving environment. In the same way that a flat-six, rear-wheel drive and a manual gearbox is timeless, so nothing has yet adequately replaced physical buttons and needles for simple satisfaction. Perhaps you won't marvel and delight at the appointments, but neither will you curse this Boxster because nothing makes sense. Which will be handy for those that keep the 25 Years for a very long time, as well they might - it's hard to imagine whatever replaces this Boxster without sacrificing much of its traditional appeal.

As a rare - just 113 of the 1,250 will come to the UK - and stylish celebration of everything that makes the Boxster great, the birthday car is a considerable success. Those attributes alone make the £6k premium over a GTS look entirely reasonable. Hand on heart our money (this car was £77k as tested) would go on seeking out a Boxster Spyder, because it's even better both to drive and to look at, but nobody who buys a 25 Years is going to be in the least bit disappointed. Here's to many more years of two-seat Porsches as good as this one.