Saved up some money during the pandemic? Good - you're going to need it... 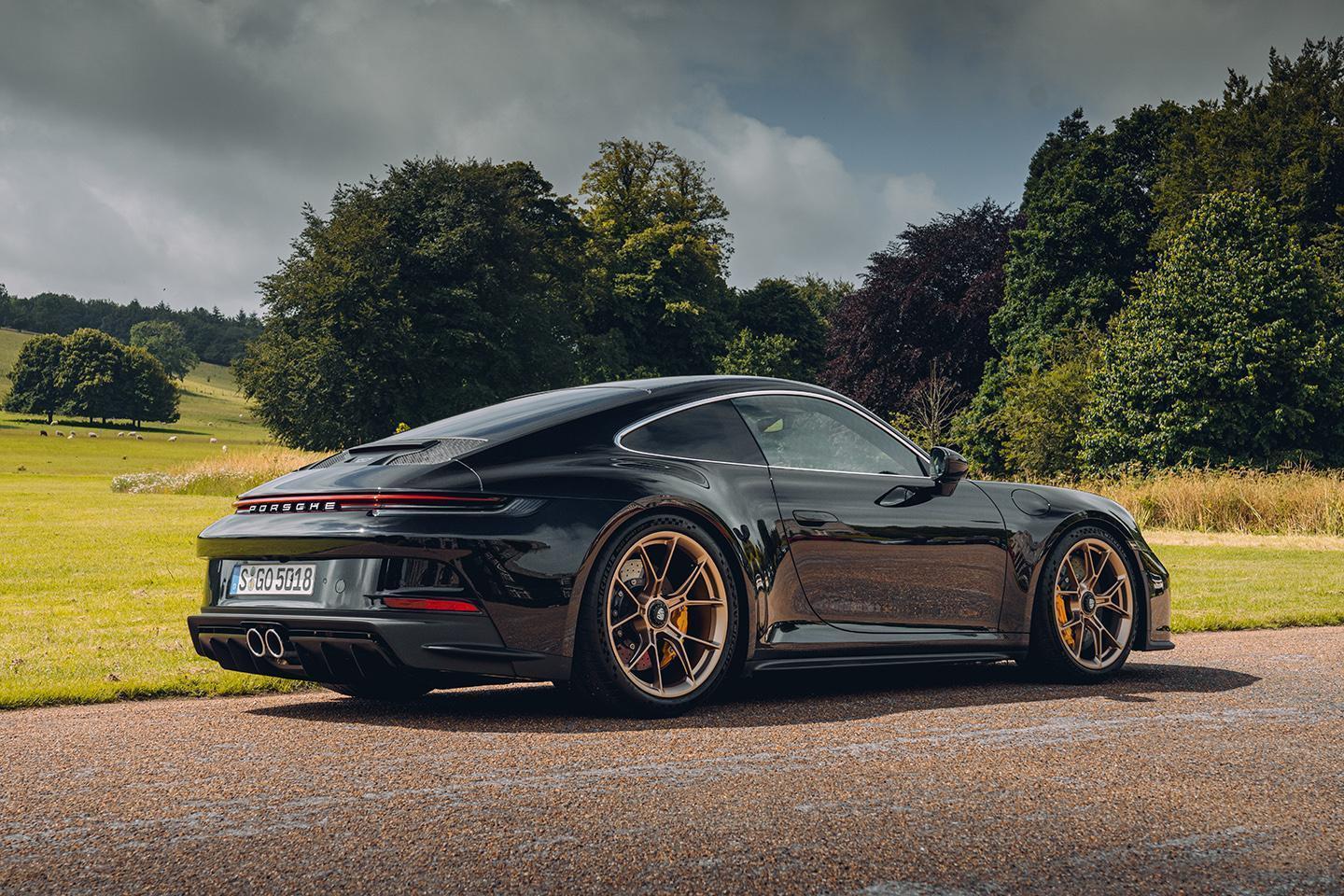 That so many loved the previous GT3 with Touring Package wasn't a tremendous surprise; the bigger shock was that it happened at all. There hadn't been a racy 911 with a Touring Package since the 2.7 RS of the 1970s, and the GT cars had been doing just fine without a Sunday-to-the-seaside spec. Add into that the existence of the 911 R and the return of a GT3 manual and it felt like Porsche had exhausted all its 500hp, six-speed 911 options.

But it turns out that, actually, you can't have enough of a good thing, and the Touring Package 991 was introduced at the 2017 Frankfurt motor show. Everyone loved it - those who couldn't get a 911 R had another chance, those who wanted a GT3 experience without quite such an obvious look had a hitherto unavailable configuration. Introduced late to the 991 meant very few UK RHD cars came - it's believed to be less than 50 - but Tourings command a healthy premium in 2021. Last time we looked (which is far more regularly than it should be), a 2018 car was on offer at £190k, and spoken for very soon after. A non-Touring GT3 manual of similar age and mileage can be had for £150,000.

So, obviously, Porsche wasn't going to hang around with introducing the 992 GT3 Touring; there's clearly appetite for the motorsport special that doesn't look as much like the motorsport special. It's easy to imagine even those who know their Brunnchen from their Wippermann might find the swan neck a bit much. To further broaden the Touring's popularity (and, much like in the Cayman GT4, subtract some of its esoteric cool) this new model is available with PDK as well as the standard manual.

That's the silver car here, the black one is the six-speed. With only time to drive one, you'll hopefully understand us opting for the latter. Not only because it means a purer connection with perhaps the best engine on sale today but - if you'll excuse some crass predictability - just look at this 911. Perhaps black with gold (and yellow PCCB calipers) is a bit much for the more modest looking GT3, crossing the line from menacing to intimidating, though it works superbly in person - silver window surrounds notwithstanding. The colour combination works well, moreover, because this is a much more purposeful GT3 than before, even without the wing. The snouty front end, enormous wheels, chunky diffuser, and the sheer size of a 992 ensure a presence denied to the subtler 991. A few might argue some under-the-radar Touring charm has been lost as result, but it really is a sensational looking car in the flesh. A word of spec advice, though: the Touring has a body-coloured front apron that's black on the standard GT3, and it can make the area around the numberplate look a little bulbous on lighter colours - see the PDK for proof.

But you don't really care, right? Similarly, we can probably gloss over the interior, which is much like a 992 - and actually quite sombre in this spec - only with exciting bits like GT3-specific buttons (the TC off and ESC & TC off ones) and a rev counter that goes to 10. It's as purposeful as the outside. Perhaps surprise and delight are in short order, but for those willing to look the important stuff is impossible to fault. It's hard to think of a better relationship between wheel, seat, pedals and stick than the one here.

Like the old car, this GT3 is easy enough to pootle about it, clutch light by Porsche GT standards and shift heavy yet unerringly precise. The revs hunt around a bit when cold at really low engine speeds, a reminder of its race breeding as much as anything else. Even by the time of getting third the manual feels the right choice.

That said, anyone hoping for an easy time of it in the Touring will be sorely disappointed. From the first speedbump and the first corner, this feels every millimetre the GT3; it's raw and immediate and visceral like no other 992 is. It could well be argued like no other Porsche is, because even the GT4 and Spyder don't have an engine this savage. It rides firmly but plushly, the flat six raising a smile using half its revs and every gearchange a thing of joy. And there's 40mph.

That's often the appeal of GT Porsches. Oh sure, those guys who do know their Brunnchen from their Wippermann will have a superb time at every track because of the pace and poise, but it's the ability to reward at road speed that marks the GT3s and GT4s out - it's no different here. This is tangibly more engaging and rewarding at 50mph than even a manual Carrera S is going faster because there's so much more going on: more feel through the steering wheel, more noise all around, more connection to the chassis through the seat. A lot more.

All of which is great news, because the day of our test feels more appropriate for testing high wiper speeds than high engine speeds, with colossal rain for lots of it. A sunny summer blast on road or track will have to wait for another day. Still, the great British summer may have worked in the Touring's favour, as it revealed so much that would probably take unreasonable commitment on a dry road. Traction isn't bad, in fact, with GT tuning of assists and the stunning precision of every control meaning you can confidently work to every threshold. The new front suspension combined with the GT3-specific rear-wheel steer tune makes for a 911 that turns in like no other; it feels like that's been said for years now but it really is spookily good. With more front tyre in contact with the road more of the time thanks to switching struts for double wishbones, confidence in the front end is higher than ever. It also means a greater sensitivity to surface changes, or certainly seems that way, again ensuring you're kept concentrating as it nudges this way and that.

But, of course, that engine ensures the GT3 always has the driver's attention. It's difficult not to sound trite or unoriginal, really, given this is another Porsche flat six that's already in the non-Touring car (and was used in the 991 Speedster), but when we can't go a day without additional confirmation of yet another nail in the combustion engine's coffin, using one like this is an unmitigated joy. The 4.0-litre unit has it all: docile at low revs, feral at high ones, just about torquey enough, most certainly powerful enough, impossibly exhilarating yet easy to use as well. To experience a GT3 rip through its final few hundred revs like a Cup car (it dried out eventually), to coordinate hand and foot into a shift at 9,000rpm and to feel it come back for another go (having dropped to most car's rev limits) is to experience automotive ecstasy. Or maybe that's the shift back down again, when required. Cherish this while you can, GT3 owners. And keep the exhaust on loud.

In fact, cherish this whole experience. Because as Porsche is pilloried in some quarters for creating ever more aloof sports cars, so the GT3 proves it can still make them more exciting than virtually any other. The quality of the hardware remains intact (the dampers can be firmer still, but you won't need that) only with a healthy dollop of immersion and feel that's lacking from the Carreras. Despite what feels like an even more focused edge than before, this 992 GT3 could be used regularly. And it would be wonderful every single time, because of the richness of the experience; on road or track, in first gear or fifth, rain or shine. It's a 911 that needs more concentration than most, and the one that amply rewards you for supplying it.

It'll be interesting to see how much difference there is between Touring and standard GT3. Given the distinct road racer vibe here, it's hard to imagine that being much more hardcore, especially with a GT3 RS on the way as well. Still, it would surely be daft to expect much less, given this is a Touring much more in name than nature - there's still only two seats, remember. And quite a lot of noise. The choice will surely be on style more than anything else, and it's easy to imagine that previously unsated demand for a more muted GT3 being met this time around. On this evidence the 992 GT3 is nothing less than Porsche at its unadulterated, brilliant best, as finely honed and outrageously desirable a driver's car as can be found in 2021. Anyone who can, must - and keep it forever.