A revelatory SUV, or marketing shock and awe? Time to find out... 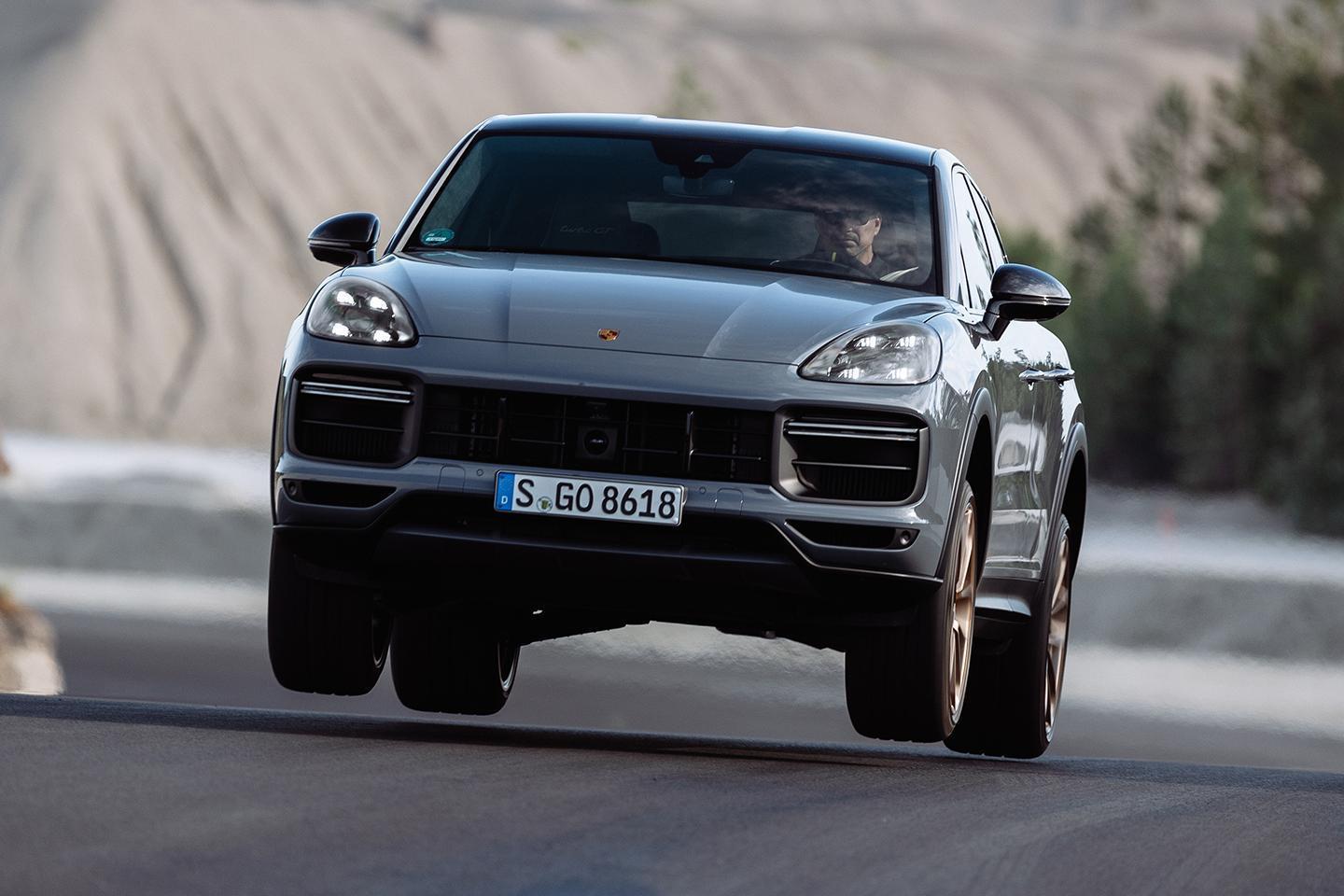 Dividing opinion is creating discussion, so they say. Whatever you think about the Porsche Cayenne Turbo GT - an SUV that's lapped the Nurburgring as fast as an M5 - you're bound to think something. In a world where so many cars can pass us by, even the supposedly interesting ones, the Turbo GT is at least worth talking about. Because making a track car from a Cayenne is making-a-time-machine-from-a-DeLorean kind of stuff - it doesn't make any sense whatsoever, but that doesn't stop you being just a little intrigued.

And credit where it's due to Porsche, this isn't simply about cranking up the V8 to its maximum to decimate the opposition. Funny world where 640hp isn't taking power to obscene levels in an SUV, but for the Cayenne it's only 40hp more than the RS Q8 (the previous Nurburgring top-dog incumbent), 28hp more than the AMG equivalents and actually 10hp less than you get in a Lamborghini Urus. It isn't the same 4.0-litre twin-turbo V8 either, despite the obvious link that would appear to exist - oh no. Porsche is very insistent that this is its own 640hp engine unique to the Cayenne GT.

Designed in Weissach and assembled in Zuffenhausen - so really, really not the Lamborghini engine, Scout's honour - it benefits from another 90hp and 66lb ft over the Turbo. That's with just 0.1 bar more boost, too, so 1.6 now in total. Everything else comes from the sort of tweaks that are so seldom seen: the Turbo GT has bespoke pistons, con-rods and crank, plus a new intercooler, uprated injectors, and a titanium exhaust as well. Again unique to this model, it saves 18kg. Which, here, is a weight-saving measure akin to leaving the mint behind at the curry house, but makes the Cayenne more interesting as a result. If a titanium exhaust can be had, you're going to have it, right?

Elsewhere the list of modifications is fascinating because it reads like so many track-focused projects, only applied to a car more familiar with a high street kerb than a circuit one. But that doesn't make them any less valid. The GT is lower (by 17mm) and stiffer (by up to 15 per cent) than a Turbo, with a wider front axle bringing an increase in negative camber. Rear damper mounts are stiffer to keep that end as precise as the front, and each corner has a bespoke Pirelli P Zero Corsa. That's in addition to every single dynamic option so often seen on a Cayenne Coupe - the four-wheel steer, ceramic brakes, PDCC active anti-roll and PTV+ torque vectoring. And 22-inch wheels available in Neodyme for the first time. Because what's a Porsche GT track car without gold wheels?

This will sound a daft statement if your mind is very much made up, but pictures don't quite do it justice. It'll remain unconscionable to many, of course, though in person the impact of the ride height drop, the front axle and the camber are much more evident. It has a stance that eludes even the rest of the Cayenne Coupe range. Whether that's a good thing or not probably isn't for us to decide, although the intent is clear - the Turbo GT looks more serious than just the jazzy wheels and silly exhaust. The interior is broadly unchanged (bar the very silly 12 o'clock wheel marking) which is good, as there are many dedicated sports cars with worse driving positions than this. And if this all seems a bit silly for a car with an 'Offroad' button inside as well, then that's probably because it is. Incongruous would sell the Cayenne short, but there are plenty of great performance cars that have come from inauspicious beginnings.

Certainly, it doesn't take long to establish what the Cayenne Turbo GT is all about - it's really, really stiff. Immediately and insistently. But not unacceptably so. Just about. At the end of the day, this is a 2.2-tonne car that's lapped the Nordschleife as fast as a Cayman GT4 and promises additional stiffness over the model it's based on - of course it's going to be firm. The quality of the damping is what saves it, as is so often the way with the racy Porsches, just about taking the edge off what must be some pretty fierce springing. Hopefully anyone considering the mega Cayenne will deem its compromises an adequate pay-off for its ability. If you're expecting a Range Rover Sport SVR experience, look elsewhere. It rides like a GT product, basically. And that's in Normal mode...

Furthermore, it should be said that there are elements of the Cayenne Turbo GT experience which are redolent of everyone's favourite 911s and Caymans as well. Primarily that's in the steering, which may well be the best part of this overhaul. There's an immediacy from the straight ahead that belies 2,220kg conclusively. As soon as the yellow stitching at 12 o'clock has moved a few degrees, so the car does, diving for an apex like no other Cayenne. Like no other SUV, really. More impressive still is the fact that such agility in a car so large feels entirely natural, and that the Turbo GT offers a better sense of feedback - on top of the extra ability - than anything else in the Porsche SUV range.

Presumably the camber helps here, pushing more contact patch into the road and lending the steering some weight, though this isn't simply burly steering for the sake of it. There's an immediate, satisfying connection with what those giant Pirellis are doing. Which is providing enormous grip the whole time - this obviously isn't something to nudge up to the limits off on the road - still, it's a welcome improvement from the norm. Whatever it's meant to be - ultimate SUV, high-riding sports car - it's the steering that distinguishes the Turbo GT from virtually every other rival.

That engine is fairly phenomenal as well. There's just no hesitation between throttle application and violent acceleration, most likely helped by keeping the turbos at a fairly low pressure. The speed - and your access to it - are unrelenting. The PDK, said to be even faster than before, is flawless as ever, and the titanium exhaust is worth however much more it's made this car cost. As even seriously potent cars are being neutered by regulation, this is a welcome reprieve, like V8 supercars with ear muffs on - the rumble at low revs is bassy, then it really thunders around to almost 7,000rpm. Whether the supercharged JLR 5.0-litre unit is still the best sounding V8 in an SUV might now be up for some debate.

Bring the Turbo GT attributes together - sensational performance, freakish dynamic ability, genuine driver engagement - and the result is fantastic. It's the most capable and most engaging Cayenne that there's been, and that's measured against a pretty high bar. The road isn't really the place for it to shine, but like the best Porsche GTs, there's still enjoyment to derive from the process of driving it: the impeccable mass control, the pedal feel, the agility and balance, the sound, the sense that you're at least having some influence over what's going on. It's to Porsche's credit that a lot of those traits have been carried over, even if in not quite the same dazzling technicolour as the smaller, lighter cars. But they are there. Not only does the road drive imply the Turbo GT could more than handle itself on track, it shows that the endeavour would surely be enjoyable as well - perhaps the more laudable achievement. Here's a Porsche that, despite appearances, revels in being driven fast. And even if you'll hate yourself for it, the driver will as well.

Does that mean the Turbo GT experience can be separated from its overwhelming SUVness? Probably not; you're always mindful of just how enormous and how imposing this car is, which tempers enthusiasm for driving it in a way that never manifests itself in, say, a Boxster. When that rear spoiler extends its extra 25mm, the Cayenne does look silly, like something is broken. Such are the compromises a super-focused SUV must face; it may carry all the worthwhile modifications and drive superbly, but it'll still resemble the fierce conflict of divergent ideas. At the end of the day this is 2.2-tonne SUV with standard ceramic brakes, carbon roof and rear diffuser; there's nowhere you won't look a bit of a wally. Too aggressive for the SUV set, too lardy for the track day crew.

Will its buyers care? Probably not. The Cayenne Turbo GT is no more ostentatious than an Urus or similar, and drives like a car of this size and weight has no right to. Indeed, for such a daft concept to have seen the light of day, and be carried off with such aplomb, is enough to raise a crafty smile. The concern is whether it might prove too aggressive for the average super SUV buyer. The Turbo GT rewards the enthusiast generously, but they don't immediately seem to be the sort of customer pondering a £150k Cayenne. Anyone who really gets what they're signing up for for will likely adore the Turbo GT because it's mostly wonderful to drive - but the overwhelming majority will probably still be best served by the common or garden Turbo.