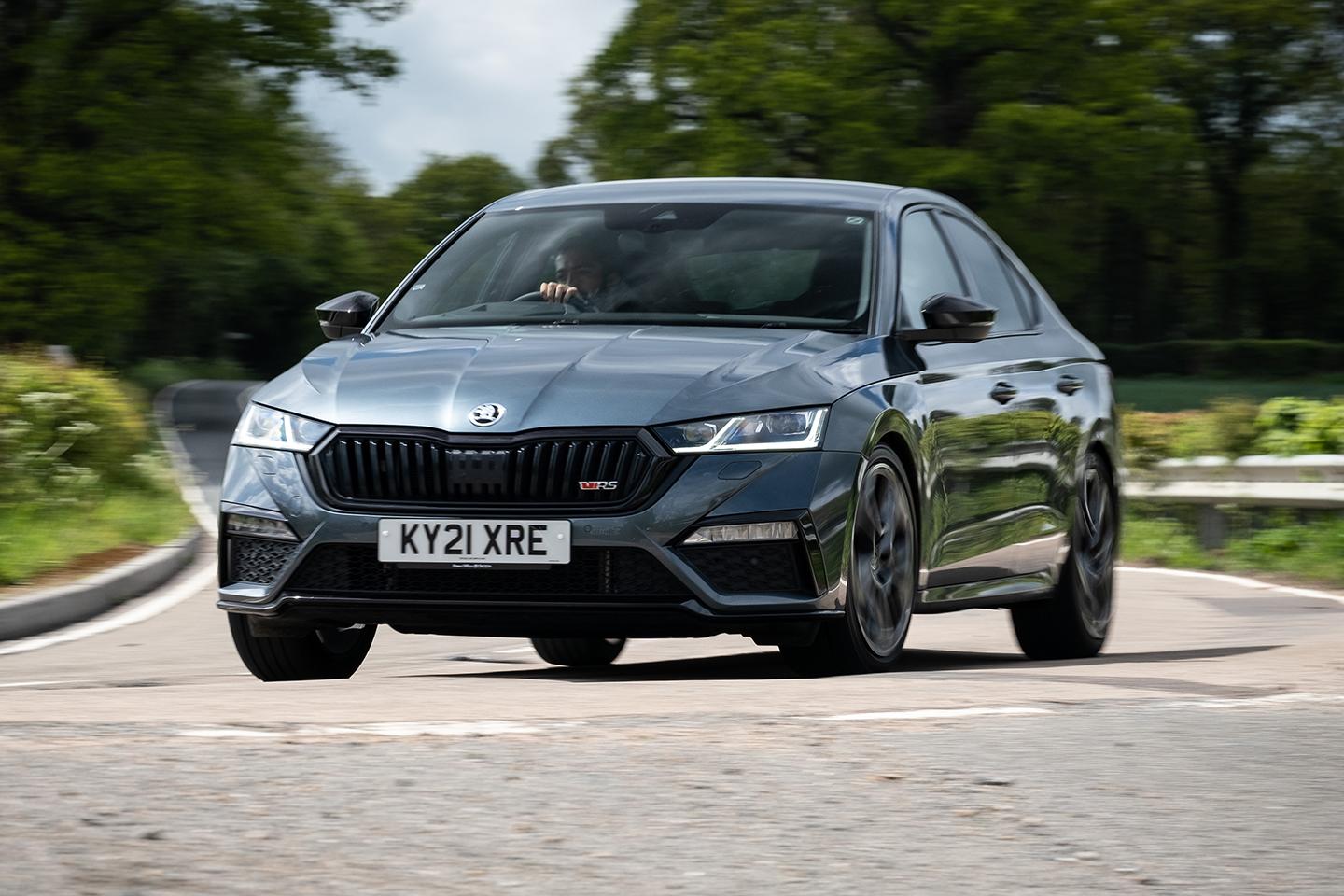 While it hardly seemed possible, this latest generation of Octavia vRS has proven to be even more 'Skoda' than its predecessor. When Matt drove the DSG-equipped wagon in December, he discovered oodles of practicality and functionality in a car blessed with a plus-600-litre boot and 245hp of punchy performance. Which ought to mean good things for three-pedal hatch you see here. The latest six-speed manual drives the front wheels via a limited-slip differential with a wet multi-plate clutch, and, like the identically-powered Mk8 Golf GTI, is considered standard-fit for the model. Don't expect much accompanying pomp: there's only the vRS badge on the nose to distinguish it from most other smart-looking modern five-doors.

It’s honest then. Having a six-speed manual in place of the seven-ratio DSG doesn’t signal any more intent than your average minicab, albeit one with the latest in VW Group cabin architecture and swish materials that would astound anyone awaking from a 25-year slumber. Carbon fibre in a Skoda? Alcantara with red stitching? These ‘high end’ items are present and correct in the vRS, along with a brace of sports seats with integrated headrests and vRS badges. But it’s still discreet – the only other vRS logo is on the steering wheel, and there’s nothing in the digital menus to suggest that you ought to be thrashing the 2.0-litre motor.

Despite possessing 245hp and 273lb ft of torque and a foot-operated clutch, it seems instinctive (at least for this tester) to still drive the Octavia with one eye on the digital economy readout. Our test car was delivered showing 40mpg – pretty much bang on the quoted figure – and it took quite a bit of effort to lower that number, so stalwart is the four-pot’s efficiency (the diesel version is obviously better still). Admittedly, the default start-up driving mode (normal) does attempt to woo you with some synthesized backing vocals. But if you're anything like us, these will be switched out quicker than you can say 'individual'.

Actually, that relates to one minor grievance we have with the Skoda package, in that it always turns on in the default setting rather than remaining in the mode you left it when it was last switched off. That wouldn't be an issue if this process were convenient, but Skoda still has you cycling through drive settings on a screen after you've pushed a physical button. Factor in an infotainment system that isn’t the quickest to respond, and the endlessly repeatable process does become a tiny bit annoying. Still, there's an actual volume dial (Lord keep us from VW's touch-sensitive slider) and wireless Apple Carplay, too. Which is nice.

The driving experience follows suit. Spec the car with optional dynamic chassis control (DCC) and you can wind back the damping to a lower rate than the factory-set comfort offers. It still won't go into full waft - expect to feel some abruptness through the car's standard-fit 19-inch wheels - but it's probably about right for the Octavia's most sporting variant. Peak torque arrives from just 1,600rpm – but sticking with a gear and letting it rev-up does confirm there’s more performance higher in the rev band. Still, the motor is tractable and the ratios are fairly leggy, so you needn’t overwork the six-speed in normal driving.

It’s a slick transmission, identical in action and throw to the Mk8 Golf GTI, with a light clutch pedal, so doing the manual work is a seamless, albeit not particularly tactile job. That said, we hardly need explain the subjective benefits of having the added control of a clutch, something that really comes to the fore when you pick up the pace. The vertical stiffness delivered in sport mode feels well suited to British roads, although you'll likely want to dispense with the needless steering weight that comes with it. Again, 'individual' is your best ally.

Get the settings right though and the manual vRS is a very competent thing indeed. Any added enthusiasm in working the engine beyond 5,000rpm is handily matched with good body control and a front end that’s eager both off and on throttle. You feel the diff working, albeit discreetly, countering any signs of understeer rather than tugging you towards the apex - which suits the car’s character. It’s in no way aggressive, meaning you can hurry it along without stress. There’s no real feedback but the bite from the Bridgestones is consistent enough, and the larger Octavia isn't dead set against evincing Golf-like adjustability. In fact, it’s surprisingly playful.

Still, even in the vRS, Skoda won’t let you fully switch out the ESP, and the car isn't blessed with expressive control surfaces or anything else unduly exciting. The reward is in the benign willingness of a spacious and generally well thought out car, which handles a workout as well as anyone could reasonably ask in such a sensible package. With an additional pedal for your left foot there’s some added involvement, of course, and a lower starting price. Expect the fuel economy sacrifice to be minimal, too. A Skoda vRS through and through, then, and probably the best one.