After what seems like an eternity, the Mk8 Golf R has finally landed in the UK. Should you buy one?

If nobody told you about the new four-wheel drive system, you'd think Volkswagen hadn't really bothered with the Mk8 Golf R at all. And why would it? The previous model was a phenomenon, as unbroken as any affordable performance car of the last decade. It was good to drive and better to use daily, but it was those inescapable sub-£300 a month lease deals that made it so feverishly sought-after. British roads crawl with Mk7 Golfs with those quad exhausts.

Volkswagen wasn't about to throw out that winning formula. That's why this new Golf R still uses the EA888 2.0-litre turbo engine that, it seems, simply refuses to die (it was first introduced back in 2007, although it's now in evo4 guise having been continually overhauled during its decade and a half in production) and, just like the previous model during its twilight years, the only gearbox is a seven-speed DSG and you have to put up with five doors.

It still looks relatively discreet for a car with such giant-killing potential (on the right road, at least), except that the Mk8 Golf is generally a fussier and less effortlessly handsome car than the model that came before it. You get only a little more power, now up to 320hp, although torque has risen by around 10 per cent to 310lb ft. Just like before, your Golf R will come on 18-inch wheels unless you pay extra for 19s. 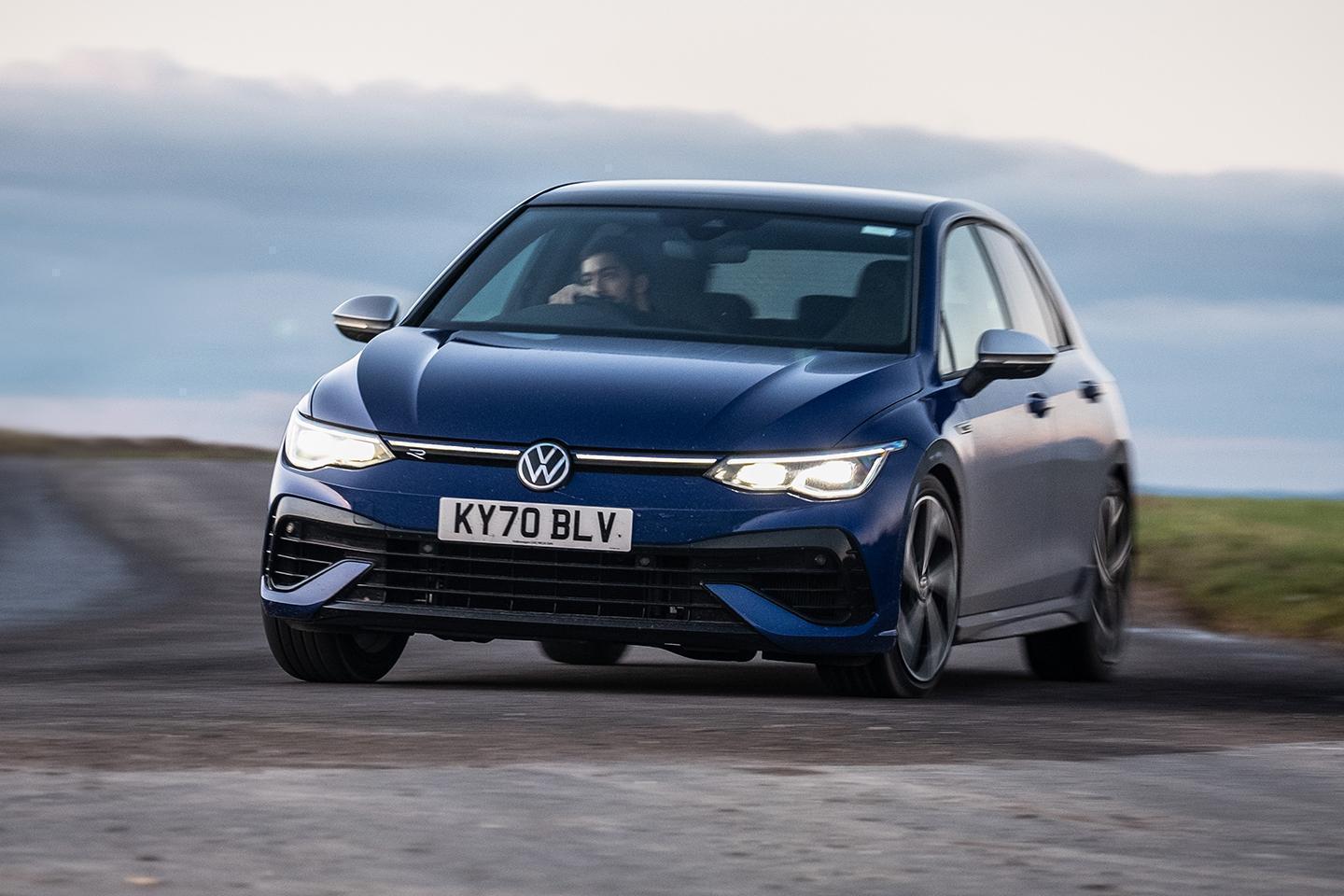 The changes within the cabin are far more obvious, this latest version proudly showing off its pair of shimmering digital displays. There are annoyances in this cockpit, although for the most part it feels upmarket, spacious and well-built. The GTI's red accents make way for blue touches everywhere - on the seats, the mood lighting, the infotainment icons, the little slivers pressed into the dashboard and steering wheel, the stitching... You'll have to be unperturbed by that particular colour if you're to use this car daily. Diehard Liverpool FC fans should look elsewhere.

The seating position is good without being great, the seats are both comfortable and supportive and, in a welcome departure, the DSG paddles are more substantial than the tiny gearshift ears you'll find in a GTI. These ones actually peer at you from behind the steering wheel rather than cower behind its spokes.

Many buyers will inevitably tick the box on the options list marked 'R-Performance Package', because it sounds like the sort of box one should tick - never mind that it'll add £2,000 to the asking price of your already £39,270 Golf R. You'll get bigger wheels, a more prominent rear spoiler, a 168mph top speed rather than a hard limiter at 155mph, plus two additional driving modes. The first is configured specifically for the Nurburgring while the second is labelled - tellingly - 'Drift'.

That's a Golf R first. Mk7 owners will be scratching their heads at that. What's a drift? Something continents do over time? And therein lies the only meaningful dynamic limitation of a supremely capable car - its four-wheel drive system was the inexpressive front-biased sort, the kind that would only send a little torque to rear when it absolutely had to.

I used a Mk7 Golf R for a year and came away thinking there was no other performance car for the money that did a better job of marrying comfort, serenity and usability with genuine sports car-baiting B-road performance. But its reluctant four-wheel drive system really did put a cap on how much fun it was to drive when you grabbed it by the scruff. It was like that otherwise witty and entertaining mate who calls time at 10pm rather than lining up the tequilas.

For the record, a Drift mode I can do without (our test car was a non R-Performance Pack model - as all the first ones are). I just don't know where or when you'd actually use it. And nor do I think you'd ever drive a car like this so aggressively that it would actually slide on the public highway. Nonetheless, I am pleased this Golf R is able to have a drift mode at all. It tells us the most pertinent thing about it - its four-wheel drive system is much more sophisticated than the last.

It isn't quite so front-biased for one thing, and for another it now features a standard-fit torque vectoring differential between the rear wheels, which can, in theory, send all available torque to the outside rear corner. That fact alone should make the Golf R a much more involving and less frustrating car at and around the limit of grip.

We'll come back to that in a moment. Elsewhere, the turbo engine is crisp and responsive, feeling more muscular now through the mid-range. The rorty sound it makes (in Race mode, at least) is augmented and piped-in, but it's convincing enough. Meanwhile, the DSG gearbox is almost too slick and clean in the way it switches from one ratio to the next. It works so efficiently that you find yourself craving just a little more drama. There's no doubting this is a very rapid car, but the powertrain feels so unstressed you actually long for more power still.

Volkswagen hasn't suddenly forgotten how these cars are mostly used, which is why it remains effortless in normal driving, quiet and refined at speed and comfortable just to be in. With Dynamic Chassis Control (adaptive dampers; a £785 option) the ride is very good, the softest setting actually too squidgy for even very poor surfaces. You're offered no fewer than 15 individual settings and for a stretch of Oxfordshire B-road that ties many other performance cars in knots, setting five was just about spot on.

There is a meatiness to the steering now that I don't remember from the previous car and don't particularly care for, although I wonder now if it's simply to do with the fatter steering wheel. It wasn't related to any of the driving modes. I think the old car's fleet-footedness has been lost slightly as well, this one feeling a little lazier on its springs. In every other respect, however, this new Golf R is far more rewarding to drive enthusiastically than the previous one.

It mightn't steer with the clarity of the last Golf R, but somehow you know precisely how much grip there is to lean on. And it's always bundles of the stuff. As you approach a bend, you have this intuitive sense of how hard the tyres will bite into the road surface, and the instant you tip the car into that bend, feeling the front end tuck neatly in towards the apex, that intuitive sense is borne out. Some cars are so numb they keep you at arm's length, daring you to push them a little harder. Others draw you in right away, keeping nothing from you. This Golf R is one of those.

As you guide it into faster, sweeping turns, you feel it roll just a little, which allows you to feel the grip build down the side of the car. The result of all this is that you hammer along in this machine just about as fast as it will go. The grip it generates seems to be concocted up in the chassis somewhere, not by four needlessly fat and uncompromising tyres. As a result, this is the kind of car you drive with confidence and assuredness.

There's some adjustability in the chassis as well, a playfulness that the previous model wouldn't recognise. At the apex it feels neutral rather than pushy, and when you stand on the power it fires itself through to the exit with much more positivity. It mightn't be sliding, but it is pushing itself along from its rear outside corner rather than scrabbling away at the front. You find yourself getting back on the power earlier and earlier because of it.

Meanwhile, the brakes are strong and the pedal itself progressive and well-measured, which hasn't often been the case with quick Volkswagens. A little has been lost compared to the old Golf R - that feeling of it being up on tippy toes; some lucidity in the steering - but thanks in the most part to a far more effective four-wheel drive system, this is the most engaging Golf R yet.