A UK car on UK roads and even some rain for good measure - can the 4C deliver?

Good things come to those who wait, apparently. So here we are, 18 months after Harris first drove the

and more than a year after our

of it over here, now with a British car, British roads and, er, British weather. Given a few days with the car we did everything bar a track day you would want to do with arguably the most exciting sports car of the moment: took the long way home from work, took the normal and boring way home from work, went to see friends in it, drove down to Goodwood and skipped the Bank Holiday lie-in for a B-road blast. Hopefully now we can deliver something definitive on the 4C and whether it really does represent the bright future for Alfa we all so desperately yearn for.

Let's begin with the negative aspects. Obviously it isn't perfect but these are real problems, not just quirks that could be excused under 'passion' or 'character' or whichever cliche you chose to apply. Most concerningly the Alfa is an exceptionally nervous car to drive down a British B-road. The front end weaves like nothing else, finding cambers and imperfections you never knew existed and throwing the car off course all too frequently. It requires too much concentration, a problem compounded by the 4C's steering. 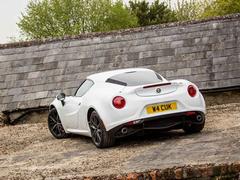 And to think this can't be enjoyed inside!

A light sports car shorn of power assisted steering should be fabulous but the little Alfa just isn't. The small adjustments required for that bizarre weaving sensation are hard to meter out because the steering is so light off-centre. It becomes a guessing game to keep the 4C tracking true, then the steering weights up and drags the car further than originally intended. For a steering system that promised so much the 4C simply fails to deliver on feel and response. It's nice to have weight in a steering system that isn't artificial but just shows that removing power assistance is no guarantee of success. A Toyota GT86 is a more satisfying car to steer with electric assistance. Really. And the wheel itself? If the car is considerably prettier in the flesh then the wheel is most certainly uglier. It's a daft shape, overly thick where your hands rest and the paddles appear direct from a MiTo.

Adding to the rather unnerving B-road experience is the throttle response. In All Weather it feels as if power is being withheld, Natural feels anything but with too great a step from All Weather and Race seems to deliver full throttle about half way through the pedal travel. And while traction is very good, even in the wet, the vagueness of the steering and throttle makes gauging the limit more of a challenge than you would hope.

The failings can be worked round but they shouldn't have to be. You learn not to grip the steering wheel tightly, to use less of the throttle travel and to do everything possible to avert your gaze from the steering wheel. Which is all a bit ridiculous really.

One problem that can't be avoided are the seats. Harris complained of a lack of support and unfortunately that remains true for taller gents. They lack under-thigh and lumbar support so longer journeys become uncomfortable. 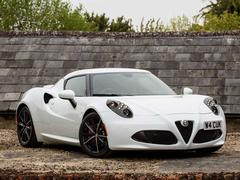 Moreover, that other aspects of the 4C are very good make its problems all the more infuriating. They feel like annoying calibration and finishing problems, that so much time and effort was expended on the carbon tub that the rest was ignored to a large extent.

So what are the good parts? Well that carbon construction is the Alfa's USP and a properly exciting one too. You climb in over exposed carbon, peer at it under the carpets and it makes the car feel really exotic. On the road too you can sense an inherent stiffness that allows the suspension to be quite supple, making the 4C far more comfortable than its low-slung stance would suggest.

The brakes as well are superb once up to speed with great feel, perfect pedal placement for left-foot braking and what feels like limitless performance. But obviously you can't brake too hard for fear of the nose veering its way across the road... It's similar through bends too; on occasion the 4C feels fantastic, assured and neutral through long corners and agile too. But frequently it will be deflected from the chosen line or your initial steering input is incorrect. Too often with the 4C you're guessing at rather than taking control of the dynamics. A track test surely beckons for future.

The engine is mega though, making that on-off throttle and some occasional hesitancy even more noticeable. It doesn't feel that revvy but that huge torque shoves the little Alfa along effortlessly and very rapidly. It's all accompanied by a wonderful collection of noises, with whistles and splurts and blares throughout. The gearshifts are certainly quick and dramatic enough too, with some nice short ratios. Anyone who thinks four-cylinder automatic sports car are dull needs to have a go in one.

As something to drive then the 4C is rather curious; the small dimensions and tiny kerbweight imply precision and minute adjustment where the reality is a far more approximate experience, anticipating boost and second guessing steering inputs. Very strange. As mentioned though these feel like detail tweaks to address rather than fundamental flaws, a point we will return to. 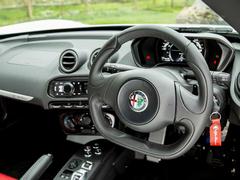 Seriously though, who allowed this?

But if the driving experience is a disappointment then the 4C's desirability just as an object, as something to be seen in, to arrive in and to discuss with just about everyone is off the scale. In five days with the car I was followed into petrol stations, accosted by pedestrians, pointed at, waved at and just made to feel like a rock star behind the (really horrid) wheel of this little white Alfa.

Never have I known such universal appreciation for a car; kids wanted to sit in it, fellow drivers nodded in approval and even the female reception was positive. Not that I was paying much attention, of course... Alfa markets the 4C as a 'compact supercar' and for garnering public reaction it's certainly up there. A few were in attendance at the Supercar Sunday Breakfast Club at Goodwood and they certainly weren't overlooked in a line up of Ferraris, Aston Martins and Porsches. For a £50K car the public response is extraordinary and the appeal of that to potential customers shouldn't be ignored.

Furthermore, the 4C is full of some beautiful little details that make the crappy ones all the more bemusing. How can such gorgeous leather grab handles and aluminium floor-hinged pedals be signed off with Fiat Punto ventilation controls? The very cool TFT display was enveloped in our car by a really cheap feeling carbon surround. And wait until you see the phone cables sprouting from under the dash... 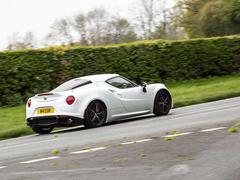 "There never used to be a bump here."

There is no doubt though that the 4C feels like a genuine slice of mini-exotica inside and out. It even has authentically poor rear visibility. But therein also lies the 4C's problem. The looks were always going to make it an intensely covetable thing, aided by the Alfa image of course. And if it was going to be a very pretty body on top of some average underpinnings then the dynamic shortfalls would be more excusable.

But it's the fact that Alfa went to the effort of engineering a carbon fibre tub for a £50K sports car, with all the benefits to ride and handling that that should bring, and then not quite delivered on the promise that makes it so frustrating. Everything about its fundamentals suggests it should be brilliant, and elements of it are very good, but as an overall package it never comes together like the best drivers' cars.

Having said that there's huge promise and potential in the 4C. The issues raised about the steering and engine response, plus the bizarre front-end behaviour, feel like they could be remedied with further development work rather than a total overhaul. And we've been here before with Alfa, haven't we? The 8C Coupe never delivered on its promise but the Spider was by all accounts a far more enjoyable car. Let us hope the same is true for the 4C Spider and indeed subsequent coupes. With a few more months testing these early flaws should be addressed to create the excellent Alfa sports car we're all waiting for. They shouldn't have been there in the first case but what did you expect from an entirely new Alfa Romeo?

For now the 4C is a sports car for posers rather than the drivers. It's exceptional for the former in fact. But it doesn't feel a million miles from being a sports car for the latter either and we're all patently aware the ingredients are there. If that can be achieved then we really will have a small Alfa sports car to be very, very excited about.