Could this 202mph estate be the M5 Touring substitute you are looking for?

Some of my favourite cars of all time, not just BMWs, are the early M-cars, the first E28 M5 and original M635CSI. And what I loved about them most is how little they shouted about their performance. They espoused the Teddy Roosevelt 'speak softly and carry a big stick'approach, preferring their actions to say far more than their appearances ever could. 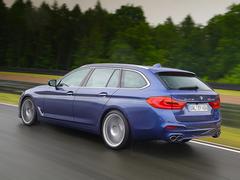 But BMW changed tack, reacting to market forces that showed customers were at least as interested in what their cars said about them as for how they performed on the road, and the delightful problem with those early cars is that they said nothing at all. Had BMW continued in its original vein I suspect it would now be making cars very like this new Alpina B5 and its 'M' sub-brand would be a fraction of its current size.

Even so, just because the B5 chooses not to brag about its potential, that doesn't mean it's not there, for the truth is the B5 is a 608hp monster.

Explaining every detail of how it got that way would take more space than I have, but the first thing that happens is Alpina takes the 4.4-litre twin turbo V8 from the 7-series, adds larger turbos, stronger internals, better breathing and additional cooling and then, once its power has been hiked from 450hp to the aforementioned 608hp, it gets shoehorned into the front of a 5 Series saloon or, crucially, Touring. BMW didn't make an estate version of the last M5 and it's not going to do with the new generation either. 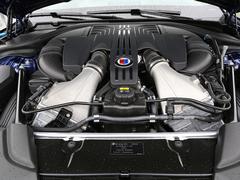 Obviously, all that power would place an intolerable strain on a standard ZF gearbox so that gets strengthened internals too, not to mention quicker shift strategies. And while Alpina toyed with the idea of making the B5 rear drive only (boss man Andy Bovensiepen told me he'd actually prefer it that way), it bowed to customer demand for it to be four-wheel drive. But to make sure it still handled the way he wanted, Bovensiepen arranged for more of the engine's torque to be fed to the rear wheels and for it to be done more of the time with the result that the car still feels very rear drive indeed.

Alpina also completely upgrades the chassis and I'm not just talking about springs, dampers and bars. There's different geometry at the front with different wishbones providing much more negative camber than BMW uses, while at the back there is not only BMW's rear steer but Alpina's own tune for that too. And of course, the main steering software is reprogrammed to suit the Alpina philosophy of progressive, linear, non-aggressive handling. 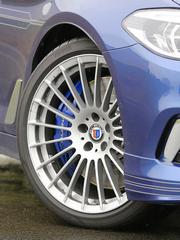 Significantly, because it reveals as much about the difference between Alpina thinking and BMW 'M' thinking, there is a brand new 'Comfort Plus' suspension programme you'll find in no BMW. Also, Bovensiepen is at pains to point out that almost all his car development takes place on public roads like those used by his customers. Tracks are used only when there is safety and sign off considerations in play.

A shame then that the only place I was allowed to drive the B5 was on the Bilster-Berg race track in the middle of Germany. Alpina freely concedes that the B5 will not be as quick as the new M5 because it has not been set up with a lap time of even the tiniest consideration. It is not how fast you go, but how you go fast.

And fast you shall go. I drove the Touring version because the power delivery is even more incongruous and it's the car with no direct BMW rival. On part throttle it's whisper quiet and, so far as I could tell on a track by running it over the rumble strips, its ride quality is exemplary. But the moment you call upon the big V8 to do its thing, the B5 does a passable impression of an artillery shell.

There is an immense sense of gathering momentum as 608hp throws 2,150kg of Alpina estate around the Rhineland. The engine note is beautiful though I'd say there was perhaps a touch more lag than I'd expected. The gearshifts are as good as you could ever hope for from a car with a torque converter. Most impressive, given the work they have to do, are the brakes which, while still made of steel were absolutely tireless around Bilster-Berg. Alpina says its metal brakes are actually at least as good in terms of both fade and retardation as Audi's ceramics, though I am in no position to corroborate that. 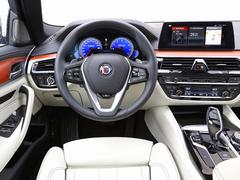 What I can tell you is that the B5 is also a fine handling car, and by the standards of estates weighing a lot more than two tonnes, it is borderline miraculous. Bovensiepen hates understeer, which is one reason for all that camber on the front, and so long as you're not stupid with entry speed, the B5's nose will always sniff out an apex, whereafter you can just gently reapply the power and trust the four-wheel drive and stability systems to see you neatly to the apex. Or you can switch all that off, give it a little lift followed by a lot of power and skid until you run out of track or talent. The only material criticism concerned some diagonal pitching over the worst of Bilster-Berg's evil undulations and a certain lightness over the crests. But you still have to remind yourself that this is an estate car.

A 202mph estate car as it happens. I love it that a company like Alpina can still exist and that the market, however small, remains big enough to keep it in business making such deftly designed, fluently executed cars. Around a track, the B5 estate was unexpectedly impressive and the lighter, better-balanced saloon even more so. All of which leads me to suspect that out on the public roads for which it was designed, it would be little short of brilliant.