Ariel's Atom is bigger and faster than ever - but does it still deliver the same bang? 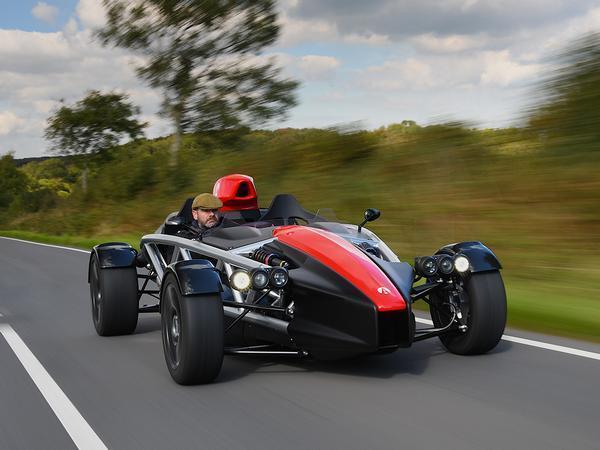 Brake pedal, clutch pedal, fuel cap: those are the three things on the Ariel Atom 4 that have been carried over from the Atom 3.5. Everything else you see is new.

These are the biggest changes to the two seat sports car from Somerset since it was first launched at the turn of the century, although it's still unmistakably an Atom. A bigger, more muscular, caricatured version of its spidery former self, sure, but it couldn't be any other way.

Seeing old and new Atoms together brings home how the 4 has matured. Ariel liked the large diameter of the tubing it used on the prototype titanium chassis so much that it has adopted a similar cross section, although still in steel, because titanium is so expensive and Ariel had to assemble some kind of argon-filled sterile tent to weld in.

Wheel diameters are up by an inch front and rear, and are wider at the back to accommodate the additional torque that has arrived Atom's new engine - the 2.0-litre turbocharged unit from the latest Honda Civic Type R. Ariel used to offer the old naturally aspirated Civic Type R engine, and throw a supercharger on it for those who wanted more power, which was pretty much everyone in the end.

The Atom 4 is a touch longer than the 3.5, although it's still only 3,520mm, but no wider, which I'm glad about because at 1,880mm it's quite big for a lightweight car. The overall weight is up to 595kg, around 20kg higher than previously. Ariel finds a surprising number lot of its buyers are tall, which is perhaps because they can't fit into anything similar.

Suspension changes are significant, too; for the first time since the Atom's introduction there major alterations to the geometry, aimed at reducing dive and squat. There are double wishbones with inboard springs and dampers - standard units or two adjustable upgrades, of which our test car had the middle set.

And there are three wheel options - standard, forged and carbon fibre, although Ariel says the weight difference isn't as big as it used to be, owing to better designed standard wheels. Tyre options are all Avon now, in ZZS or (as here) grippier ZZR, of 195/50 R16 at the front and 255/40 R17 at the rear. There'll be two exhaust possibilities, standard and a freer breathing one like the test car's. Specify no options and the base price is just under £40,000 on the road. Production Atom 4s arrive in the spring and will, soon after, be homologated for small-volume European type approval.

Now, while you could turn up the performance volume to some way past 11 on an old Atom by specifying the supercharger, this time the options - initially, at least - are to turn the Atom 4's power down. The full quota of power comes on level 3 on a dial on the slick new dashboard, with the turbo at 1.3 bar of boost pressure. You can turn that down to 290hp (0.6 bar) or 220hp (0.3 bar). Or extend your right foot less. Up to you.

On full whack, which is where I suspect you'll leave things most of the time, the claimed performance is pretty mega: 0-60mph in 2.8sec, 0-100mph just 6.8sec, and a top speed of 162mph, if you're inclined to take it there, which I doubt I would be. The aero is improved a bit, mind, but this remains a crash-helmet-at-speed car.

Inside, the Atom 4's seats are still plastic and waterproof but there's a little padding and, more significantly, they're now separated left and right, which has allowed more sculpting and shoulder support. You'll still need an allen key to adjust them, but it doesn't take long.

The driving position is terrific, and Ariel has clearly worked on the fit and finish and control weights, although it usually does, to be fair. The engine fires to a slightly fizzy idle, though less abrasive than before, and the smoother throttle response afforded by a turbo makes the Atom easy to manoeuvre at low speeds. Once it's rolling you can pretty much forget first gear.

The six-speed manual H-pattern 'box is precise and easy, the steering at slow speeds is still heavy, though not as weighty as, say, a Caterham's. The rack is slightly slowed from the Atom 3.5, while the turning circle is improved too, but Ariel's people say the big change to the steering comes at speed, where it kicks less and responds less adversely to bad surfaces.

And they're right. At a stroke the Atom has become a more sophisticated, easy riding car than the Atom 3.5 was. The ride control is seriously impressive, closer to a Lotus Elise than a Caterham now, and ditto the steering response. It's still alive, immediate and responsive, but filters out more bad bits while retaining road feel and precision. Braking is easily modulated and the stoppers are powerful - with less than 600kg to haul, and so exposed to the open air, I can't imagine they'd fade, despite a performance level that has crossed a line well into ludicrous territory.

I reckon the Atom 4 feels about as quick as a Ferrari 488 GTB in a straight line, and if there is a leggier response to the engine than with a supercharger - and there is - the fact that there's so little inertia means it doesn't last long. In second and third gear, by the time you've registered the shift lights are on, you'll be into the rev limiter. There's an extraordinary urgency to it, from any speed, in pretty much any gear.

Is it less tuneful than a naturally aspirated car? Perhaps, though there are whooshes, whistles, sucks and blows (steady) and they're quite endearing.

Is there less involvement from the fact that you don't have to work it? Not so much. There's just always loads of oomph to exploit a chassis that has made a step change from former Atoms; less skittish, less wild, less inclined to fall into oversteer in the manner of, say, Caterhams or a Toyota GT86. This might sound daft, but on the road it also feels not unlike a 488 GTB in its handling stance: firmly pliant, evenly balanced, willing to turn, able to be straightened on the throttle, and resistant to roll.

I think Ariel has made a real step-change here. Previous Atom iterations have been, slowly but surely, getting more mature and capable, but this time there's a major leap. It's still a bit wide for a lightweight car, though that matters less now the steering is calmer and more accurate at speed, and it's still less practical than a much smaller Caterham, because you can't put a hood on it - though there will be a screen. But the leap is tremendous. The Atom 4 might be the best driver's car I've been in this year.