We love the idea of a manual V12 Vantage S, especially when such gearboxes seemed all but dead and buried. A vocal minority - people like us, basically - will noisily celebrate such cars. Lip service is occasionally paid, like Porsche has with cars like the

. Before it gets back to the day job of selling the paddle-shifted autos the vast majority of its customers actually seem to want. Those that do offer a manual option as part of the regular model line-up may well wonder why they bother too, 90 per cent of BMW M3/M4 buyers apparently choosing to pay extra for the M DCT dual-clutch auto.

Aston Martin seems to think offering a no-cost, regular production manual option for its brawniest, most purist-focused model stacks up though. Hurrah for that! But does the reality really live up to the hype? And would you actually want such a thing in this day and age? I've got a day with the car to find out.

I'll work on the basis there's a level of familiarity with the basic V12 Vantage S package. Because, other than the shifter between the seats and additional pedal, this is fundamentally identical to the second-generation version that launched back in 2013 with the Sportshift III robotised manual. We're kind of coming full circle though, the first V12 Vantage of course a proper manual. One blessed with a lumpy and occasionally truculent shifter and some handling 'quirks' that still bring out night sweats in your correspondent. A proper beast of a car, its rough edges had some appeal. But with the return of a manual option the much more driveable second-generation model is now the complete package. 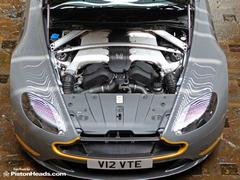 The beast in me

Not that it's been dumbed down of course. If the idea of a 573hp, 6.0-litre V12 engine in a car this compact sounds outrageous, before you drive it you owe yourself a peek under the bonnet just to hammer home the point. The voice in your head that - correctly - says a

for the Vantage's needs and results in a much more balanced car doesn't stand a chance. From the outside the Vantage is still - still - one of the best proportioned and drop-dead gorgeous coupes of the modern age. Possibly more so without the coloured accents of the optional Sport-Plus package. But with or without the stripes the V12's best angle might well be with the bonnet open.

A familiar story inside too, the Vanquish-style 'haptic' heating and infotainment controls introduced in last year's MY16 model update improving the look and feel of the cabin. Customer cars will also get the latest AMi III infotainment interface but it's still let down by some random ergonomics and the remaining parts bin switchgear. You'll be paying more attention to the shifter though, and the arrangement of the numbers on its top.

It's a seven-speeder, with first on a dog-leg down and to the left. Six would probably suffice and avoid some confusion but the fact it's adapted from the seven-speed Sportshift 'box demands it. I'll take a punt here (and no doubt be corrected) but I think the last time you'd have found this on a relatively mainstream car would have been late 80s BMW M cars, and the Mercedes 190 16-valves like the 2.3-16 I spent many happy miles in a few years back. From that I know even with familiarity it takes a conscious effort to go down and left for first, a loud beep and a prominent red 'R' in the Aston's dash display hopefully enough to prevent a very embarrassing departure from the traffic lights were you to forget. 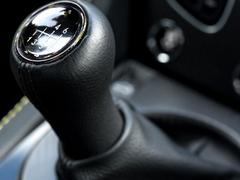 It's not entirely foolproof though and to get from first to second you need to navigate the strong indent that prevents that potentially catastrophic mis-shift into reverse. The shifter is also strongly biased to the fourth to fifth plane, meaning you have to be slow and deliberate to make it smoothly from first to second. I'm glad I'm not figuring the car, put it that way. And it probably accounts for the bulk of the two-tenth deficit to 62mph over the Sportshift.

That's actually nicely symbolic though because the manual version of the V12 Vantage S isn't about the bottom line figures. It's about the sensation and putting the driver back at the centre of the driving experience. As the miles go by I still get a bit muddled as to which gear I'm actually in on occasion. But with an engine of this reach it's not really as critical as all that.

And that's the beauty of pairing a manual transmission with an engine as charismatic and bombastic as this one. There really isn't a point in the rev range where it feels bogged down or out of its comfort zone and just holding it in fourth, picking up the throttle and enjoying the change in tone and power delivery as the revs rise is as magic as stirring the shifter about. To that end there's the AM Shift rev-matching system, thankfully switchable without having to turn off the stability control. 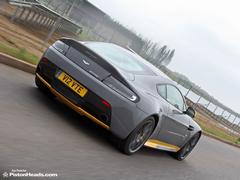 For all but sharper corners, that fourth-fifth to-and-fro covers most bases, overtakes included. You might want to drop to third to stabilise the car into certain bends, or just for the hell of it, but it's not the easiest shift to make. And the last thing you want is to be fumbling in a box full of neutrals. Making progress therefore demands attention and, I'll wager, longer than I've got to fully reboot the muscle memory.

Again, that's entirely appropriate for the V12's character too. This current chassis set-up with its three-stage adaptive dampers is much better at safely putting its power down than the first version. Indeed, even on recently dampened tarmac I'm impressed at the traction, even over rapid fire yumps and bumps.

But such is the power of the V12 relative to chassis it's been levered into you're always thinking carefully before pushing that long-travel throttle all the way to the carpet. At even seven-tenths the V12 Vantage S is exciting in a good way. As you edge towards the upper reaches it demands more and more of you. And by the time you're beyond 5,000rpm you'd better have a firm grip on the situation. With an extra 80kg over the nose of the V8 and that wild power delivery there's nothing especially nuanced or subtle about the handling balance - this is a blunt instrument for bludgeoning the road into submission rather than artfully scything through turns as you might in a fancier 911. But that's all part of the appeal and plays to Aston's bad boy image. 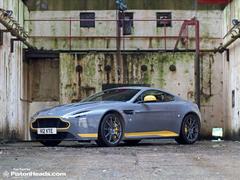 Weight and feedback from wheel and pedals are all on your side and much burlier than you'll find in equivalent Porsches, Audi R8s or the Mercedes AMG GT. But that's appropriate, the Aston's old-school vibe encouraging you to take responsibility for your actions in a way few modern cars still do. Most of the aforementioned would leave the Aston for dead if the road or weather gets really challenging. But for going against the flow, stripping back the driving experience to its basics and reducing the electronic gimmicks to the bare minimum Aston's stance is endearingly heroic. Or perhaps just bloody-minded. Either way, commendable.

And it's so much more exciting to drive fast as a result. It's as beautiful to look at as ever. Brimming with charisma. Fast and noisy enough to provoke involuntary expletives/childish giggles in those fleeting moments you deploy all its considerable power. Icing on the cake include flicked vees at everything from Porsche's 'qualification' criteria for potential 911 R buyers to CO2 and mpg figures that make a Bentley Bentayga look as virtuous as a Prius.

Naysayers will say the transmission, and those looks, are long past their sell-by date. The V12 Vantage S cleverly turns both qualities to its advantage and makes them something to celebrate. Bravo.