It has the fastest folding soft top in the business, but how does going topless affect the Vantage? 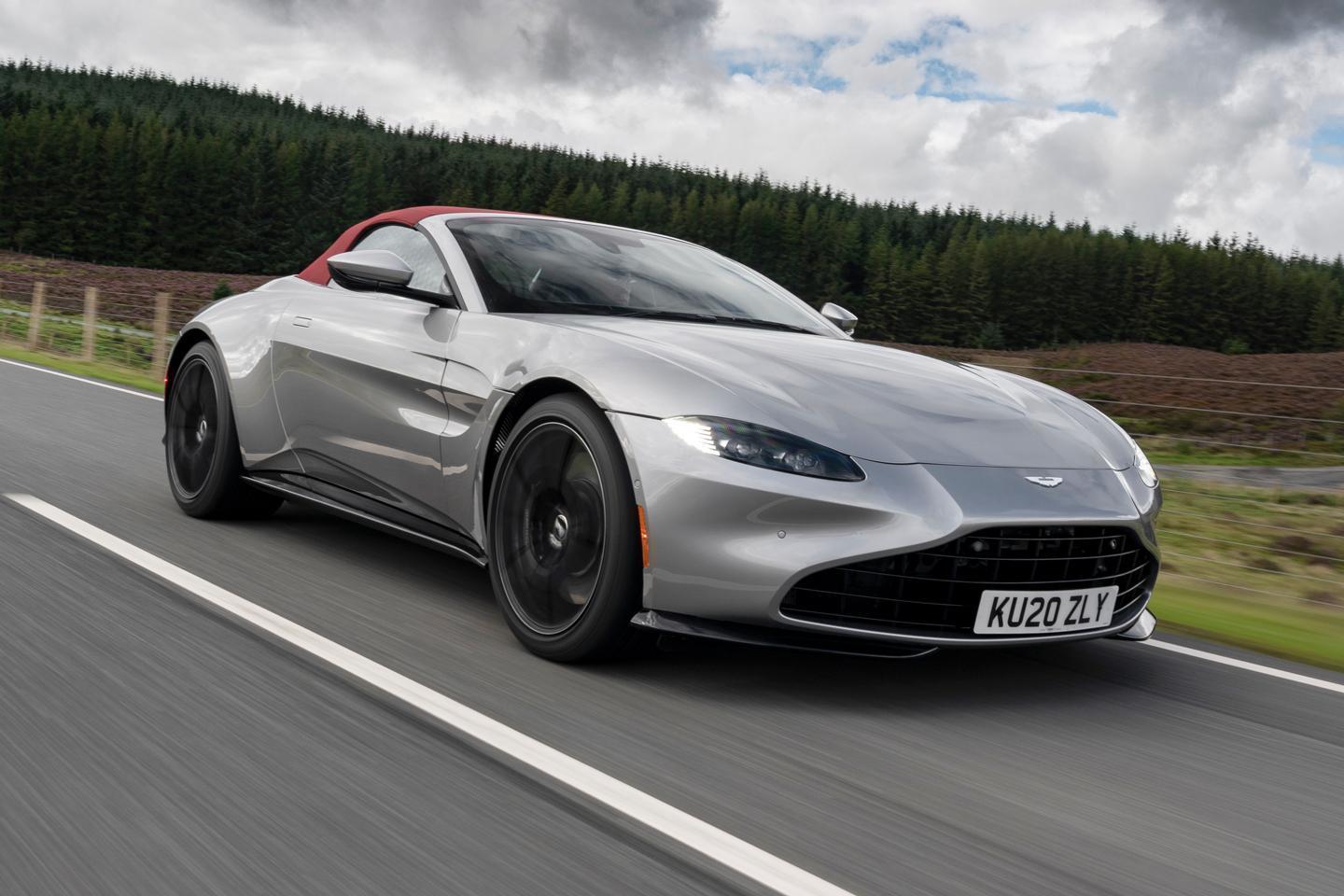 Remove the roof from a fixed-top car and three things happen right away. Firstly, the car’s body structure becomes less rigid and secondly, it gets substantially heavier – mostly because of the powered hood mechanism, but also the additional body bracing that must go in to minimise how much less rigid the structure becomes.

Thirdly, all emphasis shifts. Some things grow much more important, while other aspects that seemed so crucial in the coupe variant immediately become less so. And that’s precisely the process that plays out as the Aston Martin Vantage morphs into the Aston Martin Vantage Roadster. This new droptop model, which arrives two years after the coupe, is less torsionally rigid, but you only really notice that when driving with some commitment along very bumpy roads.

The windscreen header rail will shimmy and shudder in that instance, the image in the rear view mirror a low-res blur. But it’s not bad. I remember driving a previous-shape Aston DBS Volante more than decade ago and feeling the entire structure wobbling about so much I thought it might start shedding body panels. I know the DBS had a much bigger opening than this new Vantage Roadster and was therefore more inherently compromised, but Aston has clearly made great strides in that regard over 10 or so years.

Heavier? Inevitably. Compared to the Vantage coupe, the convertible model is 60kg chunkier at 1,590kg dry, which equates to more than 1,700kg at the kerb. The mechanised fabric hood and the motors that power it add 39kg to the overall weight of the car, while the additional body stiffening measures account for the rest. That extra mass sits over the rear axle, causing the weight distribution to shift rearwards by a full percentage point. To mitigate that as much as possible, Aston’s engineers have revalved the dampers, retuned the electrically-assisted steering and fitted a beefier rear anti-roll bar.

Interestingly, this is the fastest powered roof on sale today. You can raise and lower it on the move and do so in less than seven seconds. It really does seem to throw itself back, and it integrates itself into the car’s rear deck almost seamlessly. Roof lowered, the Vantage Roadster looks brilliantly stylish, both ends seeming to droop down towards the ground as though drawn that way by gravity.

The emphasis shift is very real. With the hood down the sensations of driving become entirely different, and whereas in the Vantage coupe you find yourself driving harder and harder as you explore its limits, in the Roadster you don’t mind stroking it along less spiritedly as you smell the countryside and feel the wind in your hair. And as you do so, the ever-so-slightly hesitant automatic gearbox that can be a touch frustrating in the coupe ceases even to be a factor.

This is a more relaxed and languid machine, and so you tend to drive it that way. The porky kerb weight doesn’t matter so much, nor the faultlessly precise but not especially communicative steering. But just as certain traits worry you less, others become more troublesome. Or rather, the bassy and flatulent soundtrack becomes more of a problem. Roof off, you’re so much more aware of the noise the car does make and also the sound it doesn’t.

We know why such cars can’t be naturally-aspirated these days, but it still seems like a pity that an Aston Martin sports car – and even more so, a drop-top one – doesn’t any longer leave a cultured and soulful score in your wake. I wasn’t particularly bothered by that in the fixed-roof model, but I was here. The twin-turbo V8, borrowed as before from Mercedes-AMG, does emit a gruff eight-cylinder rumble and there are engineered-in parps and spits when you shift up or down, but none of it is especially pleasing to listen to.

The Roadster might invite you drive it less hurriedly than you would the coupe, but it still has to stack up as a sports car. Indeed, that’s why Aston Martin has made those chassis revisions – the Roadster should feel as much like its stablemate as possible. They’ve done a really good job of it. You build your confidence over time in this car, rather than feeling it swell from the first moment onwards, partly because it gives the impression of being bigger than it really is. But soon enough you trust the grip, sense the balance, steer on instinct and enjoy the fine trade-off between body control and bump compliance. There’s also so much traction on a dry road you can stand on the accelerator pedal in first gear and just feel the rear axle bite and rocket you off the line.

The £126,950 Roadster is great to drive, albeit in a more forceful and less delicately interactive way than, for instance, a Porsche 911 cabriolet. And what about the new ‘vane’ grille? It’s very wide in a sort of Zagato fashion, but I do think it looks better than the busy ‘hunter’ grille fitted to all current generation Vantages so far (this new front end is an optional extra). It’s unlikely there’ll ever be a manual Vantage Roadster and, for the record, those unsightly lumps either side of the rear number plate on this US-spec car won’t be fitted to European models. Lucky us.

The weather gods were smiling down upon us the day we shot the video. A convertible Aston Martin, the Warwickshire countryside, late summer sunshine… And yet I’d still have the coupe. I suppose I just care about weight, body rigidity and the right emphasis.