Audi's revered flagship is now in its fourth generation, so what's it like to drive a wagon with more power than F1 cars used to have? 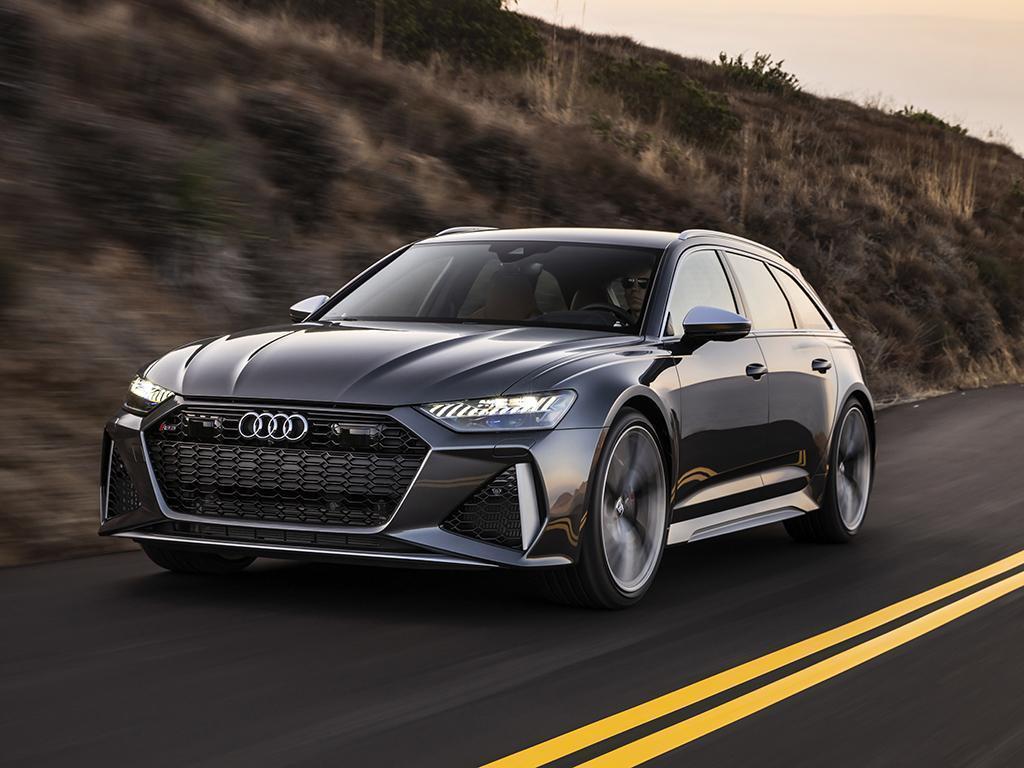 So what's the MkIV RS6 actually like? Just look at it. Your eyes say family charabanc, the spec sheet says bread-van racer. Step inside and your eyes say executive hotel, your backside and hands say Le Mans grid and your right foot says: "erm like wow, Scoobs". That's the Rennsport promise and it's been like that for 25 years, ever since Audi launched its first 80 RS2, an epochal, electric-blue turbo estate, tuned and built by Porsche.

As an Audi spokesman says: "we've never changed the positioning or character." I can remember receiving a fax from the press office on just how to get that original 315hp RS2 off the line at the Millbrook test track without (completely) frying the clutch. That was 4.9 seconds of your English seconds from 0-62mph - pretty awesome back then.

Things have moved on since those tyre-burning days, with launch control and automatic transmissions, but in this quarter-century anniversary year for the RS2 and also Audi Sport, high-performance is still built into the cars. In fact Audi Sport is in bullish mood, with plans to double sales over the next few years. At the heart of the pumped-up range is this, the RS6, first launched in 2002 as an estate. And while we've seen saloons in previous generations, since the 2013 C7, the RS6 has only ever been available as an Avant.

These are the sort of cars that the German industry hides in fiords and quiet river estuaries covered in camouflage netting and surrounded with torpedo nets - supercar firepower in an everyday family estate body. At its launch in Frankfurt this autumn, Francesco D'Amore, the exterior designer told one magazine that it was known internally as "Darth Vader - the autobahn killer."

In the past this ultra-rapid shooting break has sported a 580hp, 5.0-litre Lamborghini V10 engine. In these CO2 conscious times, however, the gen-four RS6 gets an all-singing V8 - a 4.0-litre, bi-turbo unit, with fully adjustable cam timing, cylinder cutout on light throttle loads (saving up to 0.18 of a gallon per 62 miles) and a 48-volt, starter/generator mild-hybrid system, which recovers up to 16hp. The transmission is a torque converter Tiptronic with eight speeds and steering-column gear-change paddles. Peak power is 600hp at 6,000rpm - 40hp more than its predecessor at launch - with peak torque of 590lb ft at 2,050rpm, which is a 74lb ft increase.

The 4x4 system is a proper Quattro item, which was based originally on the VW Iltis military jeep. Unlike most road-based 4x4s, which have an oil-bath multi-plate clutch performing the role of the centre differential, this has a Torsen gear-driven differential throwing torque 40:60 per cent front/rear in normal conditions, with up to 70 per cent to the front and up to 80 per cent to the rear should conditions dictate.

The rear axle is Audi's Sport item, which drives the rear wheels about 15 per cent faster than the road speed then slips that extra speed through twin oil-bath clutch packs, which can individually close and actively over speed a wheel to drive the car through a turn. There's a variable-ratio steering rack and the rear wheels can be steered in the same direction as the front at high speed and opposite way at low speeds. It effectively reduces the wheel base at low speeds for more manoeuvrability and agility, and lengthens the wheelbase at high speed for more stability.

Also running on 48 volts is the active anti-roll bar system, which props the car up through turns, but without the penalty in ride comfort, or so Audi says. The suspension is a five-link front, which is clever and saves space, but is marginally dynamically inferior to the double wishbone system fitted to the Q7 and R8 supercar - the rear is a multi-link set up. The steel springs with dynamic ride control, which is a system of hydraulically linked dampers in the manner of McLaren and, erm, Citroën's 2CV, or a full adaptive air suspension system which augments the car's already 20mm lowered ride height by further lowering the suspension by 10mm at speeds above 74mph.

Initially we were told that only air suspension would be offered in the UK (as it is with the new RS Q8) and selected our car accordingly. On our return, however, the story had changed and we were told the top model would be equipped with steel springs and adaptive damping, but that by then it was too late to drive an example. Ho hum.

Three trim versions will be offered in the UK: the £92,750 standard quattro; £100,650 Carbon Black; and the £109,250 Vorsprung. Performance is stunning whichever is chosen, although only the Vorsprung has its 155mph top speed limiter unlocked to give the full-fat 174mph, or 189mph if you buy the ceramic brake option. Acceleration from 0-62mph is in 3.6sec and 0-124mph in 12sec, with combined fuel economy of about 22mpg and CO2 emissions of 263g/km for the standard car and 268g/km for the Carbon Black and Vorsprung. This means they all fall into the £2,135 first-year VED bracket, plus the £310 luxury car tax for the first five standard years. Note to self; this might not be the cheapest car to own.

To coincide with the car's first introduction in America, the style has been pumped up on this wide-bodied A6 shell, which shares just three parts with the standard car (doors, roof and tailgate). The headlamps are the siprovision of bigger air intakes underneath. The wheel arches are pulled out over 21-inch or optional 22in wheels and tyres, with the biggest brakes imaginable. Standard anchors are 10-piston front calipers with steel composite vented discs, and optional ceramic brakes which save 34kg.

Even if you miss the bigger front spoiler, sill extensions and rear diffuser in matt aluminium, or the bonnet creases and bonnet bulges, the honeycomb grille gives the game away that this is something special. Our test car had board on top, although that's not recommended at speeds above 100mph. Even if you can live with the somewhat brash changes to the RS6's front, you might struggle with the rear where twin oval exhausts are slightly smaller than the town drain, but not by much.

Climb inside and there are the usual mix of lovely materials and near peerless build quality. Even with comfort of the accommodating cooled and heated honeycomb leather seats (optional, natch), however, the cabin feels cool and design-led rather than warm and welcoming. There's plenty of room for the family in the back and the load bed is a gargantuan 565-litres, which increases to 1,680 litres if you fold the rear seats flat.

The instrument binnacle hides various extra instruments including: a G meter; tyre pressure indicator; and engine torque and power demand, though it takes some learning. And Audi doesn't scrimp on the new German performance car must haves, either, so there's a special RS button on the steering wheel which gives access to the settings selected by Audi's test drivers for steering, suspension and throttle mapping.

Out on the Pacific Coast Highway optional 22-inch tyres pick up the concrete seams and expansion joints sounding like a saloon-bar gunfight. The ride jiggles and the steering feels inert. This is likely to be an issue to lay at the door of those optional wheels and tyres as much as it is to do with the air suspension's inherent ride-quality issues, although I asked one of the engineers why Audi hadn't used the three-chamber system developed by Porsche and used in its new Cayenne?

"We had a discussion about this system early in the program," says one engineer, "but decided not to use it." Turn off the highway at Malibu, though, and head up into the canyons and this big wagon feels menacing and portentous. The engine growls and the tyres hiss on the hot blacktop, snapping as they traverse road seams. There's a sophistication and refinement about the drivetrain, with none of the nuclear-powered-puppy-on-a-leash feel of the Mercedes-AMG rival, though some might find it a little too quiet.

Turn in to corners is simply uncanny, even at modest speeds. The front just turns; no roll, no slop, just zapping into the corner with that anti-roll system holding the outside up. Apex after apex, it goes where it is pointed, so quickly it feels like a fair ground ride. If you're on it like jam on toast, you can feel the rear axle powering the car through the turn until at last you pop out galumphing along the next piece of straight road. Stand on it and that extraordinary engine picks up from low on the rev counter and with a guttural roar (and wheezing fuel pumps) to fire you towards the horizon without seeming to feel the need of a gear change, though the big auto slurs ratio swaps smoothly without feeling sloppy.

If this isn't fun, it'll have to do, though the rest of the family might not agree quite so whole heartedly and the Labrador will likely pebble dash the boot. You can of course harden everything up with various buttons and the RS switch as you'd want to do on a track, but on the road even the standard settings make the RS6 pretty devastating. And while those big brakes are fantastic stoppers, you are never in doubt about this car's 2.1 tonne weight, it's size, or of just how hard the technology is working to keep you rubber side down.

The RS6 is an extraordinary machine, but not one to embark on without an understanding of what it's all going to cost. Put a supercar drivetrain in a heavy family station wagon - and expect it do family duties and big mileages - and you can expect some pretty big bills when it eventually comes to servicing and replacement parts. If you're merely after a quick estate, Audi already produces some perfectly acceptable examples with less prohibitive running costs. If you want supercar in wagon costume however, the RS6 will do very nicely.