There are good fast Audis and there are bad ones - which is the S1?

Just what the hell are 'drumble flaps' and how do they benefit the driving experience of the Audi S1? If the press pack doesn't have the answer perhaps the Viz Profanisaurus will.

We'll get back to you on that. 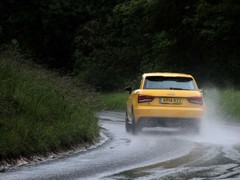 S1 in its element in the elements

In the meantime let us once again ponder the 'good fast Audi/bad fast Audi' conundrum and consider how one brand can blow so hot and cold with its performance products. Actually let's not. Let's just enjoy the fact the S1 seems to be one of the good'ns.

The accusation many Audis are merely premium priced spin-offs of VW group platforms sold at considerable profit to the status obsessed is an easy one to make. True, under Dr Ulrich Hackenberg's steely gaze Audi has become a master of eking out seemingly endless derivatives from a common pot of parts and platforms. But he must have had his back turned when someone suggested slinging a narrowed TT S back axle into the A1 to create a four-wheel drive supermini hot hatch and then actually sold 333 of them at £40K-plus. All without the apparent involvement of the Quattro division.

Four times the fun
It's probably just as well for those involved in such a stunt that the A1 Quattro project was so well received. And has been allowed to morph into a mass production S1, with a switch from the old EA113 with 256hp and 258lb ft to latest EA888 engine with 231hp and 272lb ft. 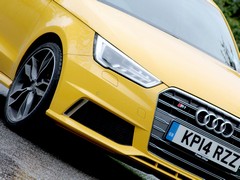 And here it is; Audi's core brand values of huge turbocharged power, four-wheel drive and rally ancestry transposed onto the hot hatch. Matt rather liked the S1

despite an oddly routed press launch in Sweden, leaving the verdict hanging on the predictable 'we can't wait to try one in the UK'. Now we have.

Let's deal with the price issue up front. Our test car's bottom line starts with a three, totalling £31,555 thanks to a slightly odd path through the options list. Many of the items individually chosen like the 18-inch wheels, coloured brake calipers and various interior bits (see below for a breakdown) are actually wrapped up in the Quattro interior and exterior styling packages priced at £1,695 and £1,295 respectively. With both of those added to the three-door's base price of £24,905 you'd have a considerably more exciting looking car with contrasting black roof, spoiler, rear panel and colour coded interior console and seat backs, a la certain Clubsport spec Porsches, for just under £28K. Which is still a hell of a lot for a supermini but easily achievable in a Mini showroom and the Cooper S options list. 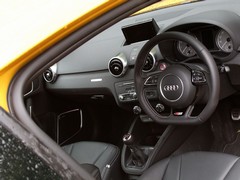 But when you consider the technology beneath it almost - almost - begins to look reasonable. As boasted by the press pack it has, like all other S Audis, fully active front to rear torque distribution via a rear-mounted electronically controlled differential while torque vectoring and other brake-actuated trickery influence the behaviour of the passive diffs in the axles. There's more cool stuff too, like a bespoke magnesium gearbox casing, two-mode adjustable dampers, bespoke suspension components and more besides. And the 'drumble flaps'? Apparently a bastardisation of the German word Drall, meaning swirl and tumble and incorporated into the intake system for 'optimum mixture formation'. No need for the Hail Sweary then.

And it's a hoot. All the controls are well weighted and harmonised, the brakes don't grab, the gearshift is fast and precise, the steering is positive if not feelsome and though there's the familiar Audi Drive Select options there's mercifully little mode faffery to get in the way of enjoying it. And, get this, it's even got a sense of fluidity to the damping. Whoever set this car up knew what they were doing and worked hard on the whole package.

But there's character too. In some applications this engine can feel a bit overboosted and tuned to dump all the torque in your lap in one hit. And although the spec sheet shows you get your full 272lb ft from just 1,600rpm there's almost a hint of turbo lag in this application - just a hint mind - that gives a real sense of forced induction thrust. Turbos are a big part of fast Audi heritage and it's nice to be reminded of it, albeit without the actual inconvenience of genuine lag. 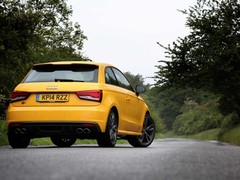 Beauty in the eye of; let's just say it goes well

It all adds up to a car that really flows, the compact size, traction and broad spread of easily accessible power making it a fearsome backroad weapon, especially in the foul conditions of our test period. Imagine old-school Subaru performance in a supermini-sized package and you're pretty much there. OK, you could have a proper

for the same money but there's something appealingly bonkers about having all this in such a small car.

Ride the boost or row around the box, the S1 is always eager, goading you into earlier and earlier throttle applications as you learn to trust in the ability of the chassis to put it to good use. It's pretty ruthless about holding a line and beyond a predictable nose-led stance won't go beyond four-square neutrality even with provocation. But by heck it's effective. If the bald stats don't seem that impressive just take a drive and understand how meaningless 0-62 and vmax really are to enjoying a car in its natural environment.

There are obstacles. Although livened up by the styling pack the S1 remains a bit top heavy and lumpy in appearance and rear seat and boot space - the latter reduced by 60 litres to make room for the rear axle and fuel tank - are not what you'd call generous. It's heavy too. At the points you interact with the cabin quality is good but you don't need to look far beyond that for cheaper plastics you wouldn't get in the S3 you could have for not much more money. And though they sound good four exhausts on a supermini look silly.

But a hot A1 could so easily have been something much more cynical and marketing led. That the engineers were let loose on it first is hugely encouraging and makes a degree of sense of that burly price tag.