200hp and beyond in BBR's MX-5 with attitude [updated with vid clip!] 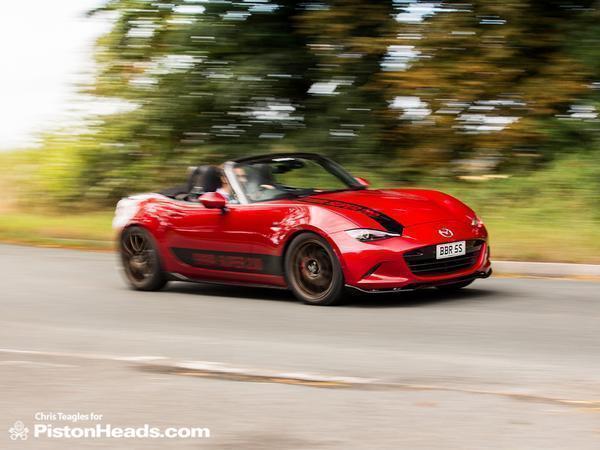 MX-5 haters look away now. Actually, don't. Because with this latest tuning package BBR has unleashed attitude and character in the

you may not have credited it with before. And for all those bemoaning dull-sounding turbos and their diesel-like power deliveries in everything from Civic Type Rs to Caymans, M3s and beyond, there may yet be hope.

OK. So 200-and-something horsepower isn't about to ignite many undergarments. For that you need to be looking over the Atlantic and talking to Flyin' Miata about its LS3 V8conversion. 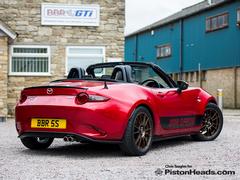 Back at BBR again!

But if you consider tuning to be about subtly enhancing existing favourable attributes this Super 200 looks to be an absolute cracker. Here we have a lightweight roadster that thrives on revs. A car with that instantaneous throttle response only a naturally-aspirated engine can deliver. One that encourages you to rev it out all the way to the redline and delivers new sonic delights on every step of the journey there.

Return on investment
Naturally-aspirated tuning is, of course, big on cost and low on the kind of impressive numbers you can get from turbocharged motors. Which isn't to belittle those like Revo Technik or the work that goes into making a 450hp Golf R driveable and, seemingly, sensible. BBR has a long history of turbocharged conversions too and its MX-5 packages have always sold well - we enjoyed the GT270 in the previous NC and work is well under way on a kit for the ND.

If you want something more sympathetic to the MX-5's core values the Super 200 kit would seem the way to go though. And the signs are good from the moment you press the starter button, prompting a cheeky start-up flare of revs and an assertive rasp from the BBR backbox. This and the 2.5-inch centre-section are additional options over and above the £3,354 fitted cost of the Super 200 kit, the extra grand or so adding a further 14hp as well as a dose of extra noise. 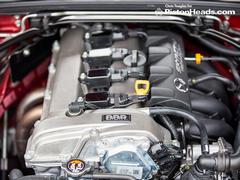 Noise that goes against the instincts of BBR boss Neil McKay, who prefers his conversions to more subtly amplify the performance of the standard car. A quieter Gran Turismo backbox is also available to that end. "I know you guys like it though so we've got to put the Super Sport exhaust on," he shrugs as he bids us farewell for our razz along the nearby Northants B-roads.

He knows our tastes. In an age where otherwise dull sounding engines rely on trickery both electronic and mechanical to make an inspiring noise the purity and sharpness of the tuned Mazda Skyactiv motor refreshes like the post-sauna plunge pool. We've praised it before but Mazda's unconventional approach to hitting modern emissions targets gives BBR a superb canvas on which to work its magic; while everyone else goes for low-rev torque and turbos the Skyactiv opts for high revs, high compression and good breathing to deliver the goods.

Heavy breathing
As is often the way though inherently sound foundations are often scuppered by packaging, emissions regulations and other compromises. The high inlet temperatures Neil discovered on the dyno with the stock engine were rectified by a simple shift in the intake position and the Super 200 four-into-one exhaust manifold removes the restrictive catalytic converter Mazda needs to hit the warm-up emissions targets. This and the new cams are the main upgrades over the Super 190 kit we've already driven, BBR's Starchip remap module tweaking the fuelling, ignition and timing to unleash the potential so obviously there in the stock set-up.

And while the engine's nature, the razor sharp throttle response, the closely stacked gearing and the delightfully flickable little shifter always encourage you to hunt for the revs with for-the-hell-of-it downshifts there's impressive mid-range to lean on too. Those accustomed to modern turbo engines will be wondering where the drama is but, for a naturally-aspirated motor, the Super 200 is as happy to pull in-gear as it is to scream out to the redline.

Meaning you can endlessly adjust the way you choose to make progress without resorting to contrived push-button sport modes or any of that nonsense. You simply adapt your throttle inputs and shift points to taste, the switch from going with the flow to maximum attack coming as an instinctive response to what's unfolding before you. Lovely.

Numbers game
We've gone this far without discussing numbers, there being some scepticism expressed in our original news story about BBR's claimed figures for the Super 200 package. Neil is unabashed, pointing out pre-conversion cars reliably record the official figures on the same in-house dyno he gets his numbers from. And if his products weren't delivering on their promised improvements he'd be on a hiding to nothing publishing the stats he does. One day we'll figure the car and see what it delivers; as a sensory experience though the Super 200 package more than delivers on putting some much needed extra spring into the standard MX-5's step. 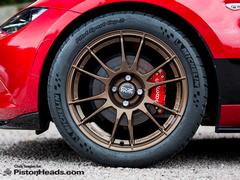 There's clearly more to this car than a bit more power though. Sitting low on BBR's own spring/damper package and wearing a gorgeous set of bronze 17-inch OZ Ultraleggeras it demonstrates how well Japanese cars respond to some carefully chosen upgrades. Modding culture is, of course, deeply embedded in the JDM mindset and you get the sense Mazda considers the stock version a blank canvas for enthusiasts to tweak and fettle as required.

More of the same
It's more than just a style thing too of course. The revised suspension successfully rids the MX-5 of its rather precarious, on-stilts feeling, containing the weight shifts and lurches you get when driving the standard car with any vigour. There's a bit more weight to the steering, a more predictable response to the wheel and much improved body control without the brittleness of the Bilstein damped Sport chassis in the standard car. All 2.0-litre MX-5s have a Torsen limited-slip diff as standard too, the grip of this car's Cup 2 tyres on dry tarmac making its influence subtle, the centred weight distribution and rear-driven balance delightful if not domineering.

Four-pot Wilwood solid calipers might seem like overkill for a car as light as this but contribute to the improved ride and response with a 2kg saving in unsprung weight. And the stopping power is immense, the pedal reassuringly solid and able to stand the car on its nose without even waking the ABS. Not the way you drive an MX-5 on the road of course. But useful to know were you to take it to a track. 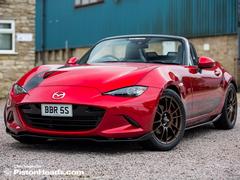 Not just for fans; you'll love it if are one though!

Adding what you see here to the cheapest 2.0-litre MX-5 you could buy wouldn't see you much change from £30K, though of course you could just fit the Super 200 kit and be done with it for far less. But even at this level and price the MX-5 makes so much sense. And Fiat clearly thinks there's a market, given it'll be charging around the same for the

. There's an interesting head-to-head to be conducted there when we get our hands on that car. Meanwhile those seeking a more decisive performance upgrade won't have too long to wait before BBR's turbo conversion hits the market. However you wish to proceed the upgrades are commendably sympathetic to the values of the standard car, while at the same time dramatically increasing its capabilities. Some trick. Some little car. And another little boost to the believers who really do consider a tweaked MX-5 as the answer to everything.