as a PH Fleet car it was hard to disagree with this conclusion. 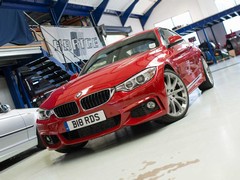 Say what you like about the boisterous M135i and M235i but neither score highly on the beauty stakes while the 4 Series, especially in M Sport trim, is a real looker. It's got a lovely interior, turbocharged six-cylinder engine with 306hp driving the rear wheels, returns suitably under the radar official mpg and CO2 figures and you can have it with a manual gearbox.

Given the ingredients all seem good why is the finished dish so lacking in flavour? Muted steering feel, the slightly asthmatic power delivery, dampers that seem to run out of ideas just as you're getting in your stride and an open diff keener on spinning away that turbo six's power than making it work in your favour ... it all adds up.

Toy cupboard
Experienced BMW tuner Birds Auto came to the same conclusion and has gone to work on the 435i to create an upgrade package badged B4-3.5. Highlights include a Quaife limited-slip diff, custom valved Bilstein B6 dampers with new springs, retuned anti-roll bars and a Hartge-based engine upgrade that boosts power from 306hp to 362hp. The 20-inch Hartge wheels and rorty exhaust fitted to Birds' demo car are there on the pricelist if you want the world to know your 435i has been tickled but if you just want it to drive a little better you can save yourself significant cash by concentrating on the mechanical bits, the B4-3.5 package costing £7,866 including VAT and fitting. 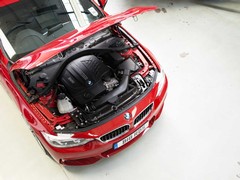 Chatting with Kevin Bird you get the clear impression of a dedicated BMW fan left underwhelmed by the 435i and, indeed, the direction of the brand's sub-M product. Something of a purist he's clearly not a fan of gimmicky multi-mode dampers and deliberately chose a manual car as the basis for this demo B4-3.5. The increased traction from the diff has, he says, enabled softer springs (circa 20 per cent) but a firmer anti-roll bar at the rear axle with similar spring rates to stock up front but with a 15mm ride height drop. This all adds up to a bit more bite from the front end, combined with a more assertive rear-driven balance. All the while the dampers move quickly through their stroke while maintaining body control at the extremes in a way the flaccid standard items entirely fail to do.

These, you'll correctly surmise, are good things. The steering still isn't massively feelsome but there are nibbles of feedback absent in the numbed down standard set-up. On the big wheels the ride does have a brittle edge to it and a degree of camber sensitivity, Kevin saying it's a lot more compliant on 19s and favoured Continental tyres but conceding many customers like a bit of visual bling too. There is a more subtle 19-inch Hartge option too if you want your B4-3.5 to stand out from the crowd of 420ds without looking too OTT. Pays your money, etc. 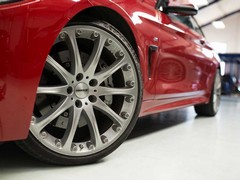 Cracking the codes to tune BMW's N55 turbo six is apparently a challenge but Birds - with a Hartge package - has extracted a safe 56hp/59lb ft boost to bring the numbers up to 362hp and 356lb ft. Where the stock car is tuned to deliver its peak torque from a typically diesel-like 1,200rpm that new figure doesn't arrive until 2,950rpm, indicative of the car's more urgent nature and encouraging you to rev it out rather than just sit in the torque band. As such the power upgrade doesn't initially feel too dramatic but as the revs - and boost - build the engine has a more obvious shift in character, a slight increase in lag if you attempt to accelerate in-gear the only small trade-off. It sounds good too, Birds' own exhaust system freeing up a more classic straight-six howl befitting a performance BMW though perhaps a little boomy at lower revs.

Other detail mods include removing a clutch assistance booster and shortening the gearknob to try and make the pedal/shifter interaction feel a little less spongy. The Alcon brakes are a nice addition and add a firmer, more assertive middle pedal to the spread of dynamic improvements. They're an additional £3,381 over the B4-3.5 kit though and probably an indulgence rather than a necessity unless you intend to use the car regularly on track.

Would you though? Possibly not, because unlike the rather more shouty 'official' BMW MPerformance upgrades Birds has wisely avoided the attempt to build an M4 on the cheap. Because, frankly, that wouldn't be possible anyway - a new 435i M Sport at £41,655 wouldn't need many extras to knock on the door of the £56,635 starting price of an M4. 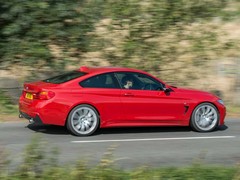 Kind of where previous non-M BMWs always were. The Quaife diff is a more subtle device than the assertive 'smoke 'em if you got 'em' character of the M4's active equivalent, locking up smoothly and progressively to finally give the 435i's rear axle some say in the car's attitude. It's not out to turn every roundabout into a drift contest, simply a more honest expression of traditional BMW rear-driven values that the parent company seems intent on engineering out of its standard cars.

Traditionally the bigger-engined six-cylinder 'civilian' BMWs were for those keen to make progress with a more nuanced driving experience, focused on realistic daily speeds than the final few tenths of the performance envelope. That's what was missing from the standard 435i. Dig out a 435i from the classifieds with a bit of initial depreciation under its belt (as much as £10K in the first year, seemingly), pick and choose what you'd like from the Birds menu of upgrades and you could well end up with a tasty dish of subtle but distinct flavour. And if that doesn't do it for you the idea of the same package in a 335i Touring answers a desire for a fast 3 Series estate BMW M still refuses to cater to.