Yes, we know it hasn't got any pistons, but stick with us...

Sadly for us petrolheads, the world is changing place. Not only are we busily using up vast quantities of squashed dinosaurs, the population is rapidly expanding and this is bringing its own set of issues. According to BMW, 70 per cent of us will be living in big cities by 2050 and as we all know from watching sci-fi films that means riots will be breaking out, women will have three breasts and, most worryingly of all, petrol cars will almost certainly face tough restrictions.

While the price of fuel will inevitably continue to rise, the main problem is not what you put into the motor, more what comes out of the exhaust pipe. Smog engulfing big cities all over the world has seen governments start to introduce strict limits on the number of petrol-engined vehicles allowed into built up areas. So we must either go greener or get the bus, which is why most manufacturers have started to develop electric and hybrid vehicles. Now, alongside the i3, BMW has launched the C Evolution, a fully electric scooter that is actually very cool. Despite its only pistons being located in its brake calipers... 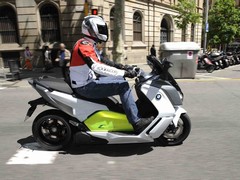 C evolution in its element...

The electric world is totally different to the petrol one, so I'll try and point out the C Evolution's highlights while not getting too stuck in the technology (tech heads look out for interviews with the bike's designers soon).

Powered by three batteries taken from the i3 (which runs eight) the C Evolution houses them in an aluminium case which doubles up as the bike's frame. On this frame BMW has hung the swingarm and forks, creating a very cool looking scooter. By not having a separate frame BMW has saved weight, meaning the electric bike weighs 265kg, which is just 4kg more than the C 650 GT petrol scooter. The C Evolution comes with recuperation technology, ABS and traction control as well as power modes, a reverse gear and heated grips.

But here is the amazing part. Despite producing 47hp and 53lb ft as well as having a top speed of 75mph, this scooter can be ridden on a car licence once you have done a CBT assessment and gained a provisional A1 licence. It's a quirk of the electric rating as because the power drops over time as the battery loses charge, the C Evolution has an average power output of 15hp, which is learner legal. 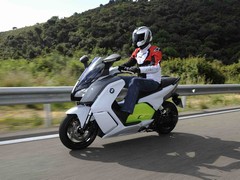 Yep, this is an L-plate scooter that will match the C 650 petrol models on acceleration thanks to a 0-30mph time of 2.7 seconds and 0-60mph of 6.2 seconds. However as with any electric vehicle there are three issues - range, battery recharge time and price - so let's get them out of the way. BMW claims a 100km range with each battery percentage equating to a kilometre. So that's 62 miles, although this varies with usage and can be boosted by 10-20 per cent through recuperation.

The battery itself takes just over four hours to fully recharge from a normal household mains supply. Now the biggy; the C Evolution costs £13,500, which is about £4,000 more than the firm's petrol scooters. While there are essentially no running costs bar electricity (the only servicing is general maintenance to tyres and brakes) that's still a lot of cash. Although BMW is offering the C Evolution on its PCP deal.

Riding the future
In 2012 PH2 tested the prototype C Evolution and aside from some slight styling changes I'm glad to report the production BMW feels very similar. Where the prototype had a bunch of wires under its seat, the production bike has one cubbyhole at the front (the other contains the charge point) and enough under seat storage for a full face lid. It's not the biggest space, but that's the compromise you get for bulky batteries that ensure it has a decent range. BMW sells aftermarket top boxes if you want to boost the C Evolution's storage further. 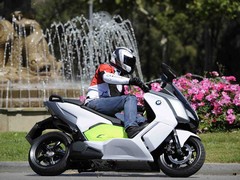 One feature the production bike has that the prototype didn't are fuel models. Unlike a petrol bike's fuel modes, Road, Eco Pro, Sail and Dynamic affect the performance of the recuperation rather than the bike's power. Road gives you full acceleration and 50 per cent recuperation, Eco Pro more recuperation with limited acceleration, Dynamic full power and an abrupt recuperation and Sail only recuperation when braking. Although they sound pretty similar, riding the bike reveals massive differences between the modes.

In Eco Pro the C Evolution felt sluggish to accelerate and while Road was better, I felt the most practical mode was Dynamic. With full acceleration as well as sharp recuperation, I found you could almost avoid using the bike's brakes at all and instead simply close the throttle to decelerate. In terms of electrical conservation/recuperation, this is ideal and to ride it feels as if the BMW has a motor with massive compression that is trying to drag you to a halt. Imagine a really big V-twin on overrun and you aren't far off, although the BMW's electric engine doesn't stutter or stall at low revs. Sail mode, however, is a whole new experience.

With absolutely no recuperation, when you shut the throttle the BMW just, well, sails on. While on open roads it makes complete sense to conserve momentum, on a downhill section of bends it was terrifying to suddenly find no engine braking. It just takes getting used to, but I'm not sure it is for me. And speaking of bends, BMW has done a very impressive job of locating the C Evolution's bulky batteries so it doesn't upset the handling. 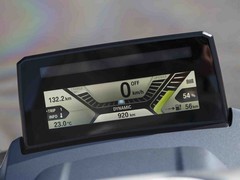 At low speed the BMW doesn't feel heavy as the weight is held low in the frame while once you escape the city and attack a few corners it continues to impress. Although the small wheels take a bit of getting used to, the BMW handles really well, turning into bends without too much of a top-heavy feel and holding a line securely. It's not as sporty as the Yamaha TMAX, but it still does a good job of being far more agile than you would expect of a big scooter and I reckon the handling is better than the petrol models. The ABS works perfectly, however the rear did seem very keen to activate. This might be down to the small wheels or simply my heavy handedness.

Is this the future?
I've ridden a few electric vehicles and the BMW is by far and away the classiest ride, which is what you would expect from such an expensive bike. The level of finish, technology and overall quality is superb and from the LCD dash with its array of colours and confusing lights (I only ever looked at the speedo and battery power level) to the lovely white and green colours the BMW is pure class. The claimed range of 60 miles is a touch disappointing, but this is BMW and they always claim low so as not to upset owners. I reckon it will go for quite a few more if ridden in town.

If you like the concept of green power and fancy an electric scooter, as long as price isn't a barrier, then the BMW is a proper adult form of city transport from an established and trusted company. The motor is more than powerful enough for two up riding and it will easily out accelerate most cars to its (restricted) top speed. While you can just pass your CBT and hop on it, I would recommend a bit of further training before taking to the road if you are new to two wheels as this is a pretty rapid machine.

My big worry with the C Evolution is the technology. With batteries developing so fast, what will the C Evolution be worth in three years' time? BMW offers a PCP deal that after approximately (it is dependant on conditions) a £4,500 deposit and £164 a month for three years you have a balloon payment of a guaranteed £4,400. OK, that's just a minimum and the actual bike will probably be worth a lot more, but it shows that there is the potential for horrible depreciation on electric vehicles. That said, with virtually no running costs and the incentives for companies to install charging points, you could probably work out a way of charging your bike for free everyday on the firm's electricity bill...