Knowing what we do about BMW's

, and given that its

equivalent is both better looking and more focused, it should be no great surprise to learn that the M235i is a very accomplished performance car indeed. It's fun, agile, fast and refined, too. What it isn't, though, is perfect. 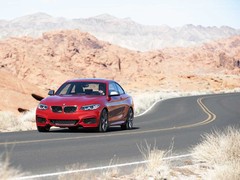 Coming to a PH discussion thread near you now!

The 2 Series can be considered BMW's third small, four-seat coupe, after the 1 Series of 2007 and the 2002 from way back in 1968. The profile is recognisable from both; cab-back, three-box shape and evidently rear-wheel drive. The M235i, with its aggressive styling treatment to the front and rear bumpers and sleek headlamps, is an attractive thing to behold, if not timelessly beautiful.

Improving on the styling of the M135i was important, if not terribly difficult, for it was one of few universal areas of criticism. The rest of the package was roundly praised and the M135i neatly filled that niche between standard BMW AG machine and full-blown M road racer. The M235i is the ninth product in BMW's new M Performance line-up; developed by engineers from both AG and M, these M Performance cars strike a neat balance between sporting ability and affordability.

Minging the merciless
Compared to the 1 Series Coupe that came before it, this model is a little longer and lower with a wider track front and rear, but weight has remained the same. Cabin space has improved with an additional 21mm of rear legroom so that a six-footer can sit behind another in reasonable comfort. The M235i sits atop a line-up that includes three diesels and two additional petrol models. 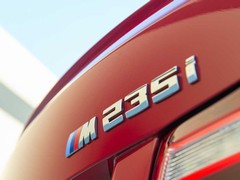 The M235i is rather more than an M135i with a chunk of roofline missing; the springs and dampers are bespoke, both stiffer to give a more focused dynamic character. Roll stiffness at the rear is up a little as a result of those firmer springs with the intention of improving agility, particularly on turn-in.

What is shared with its hatchback brother is the drivetrain, including that superb six-cylinder, single turbo engine that develops 326hp. A six-speed manual gearbox is standard with the eight-speed paddle-shift auto that so impressed in the M135i also available at extra cost. Although we haven't yet had a chance to sample it, a limited-slip differential is available through BMW's M Performance accessories range. As a dealer fit option costing around £2,000, the LSD can be installed at any time in the car's life.

On a tilt
I first drove the M235i on track at the Las Vegas Motor Speedway. Fun as it was to barrel around the 1.5-mile tri-oval at speeds approaching 150mph it's not got a whole lot to say about everyday driving. For what it's worth, though, the car felt pretty solid up on the 20-degree banking. Several laps of the short infield circuit were much more edifying, although all was not positive. 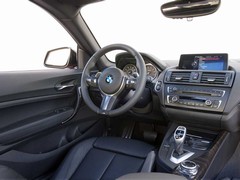 Familiar from this angle - nothing wrong there

Given the significant suspension changes compared to the hatchback, I did expect the M235i to shine quite brightly on this little circuit. For the most part it did, too, for the turn-in, particularly whilst trail-braking, was very sharp and positive with little by way of natural understeer. Upon that drivetrain I cannot heap enough praise; the engine is strong and responsive from low down and it revs keenly all the way out, sounding quite superb from inside the cabin as it does so, and the eight-speed gearbox (no manual cars were available on the launch) shifted quickly and smoothly.

The ultra-rapid steering does lend this acute sense of agility and it is accurate, but there's too little information passing back through the rim. The lack of a locking differential didn't prove to be an issue in these conditions; once the chassis is loaded up after turn-in and just enough throttle is applied so that both wheels are driving, a firm stab of gas will spin both wheels up equally without the unloaded tyre simply robbing and wasting all the power. This helps to neutralise the car from apex to exit, or send the rear end swinging around if you're particularly keen.

Quick left-right
The issue with the M235i as a track car, though, is in quick direction changes, in which instance the chassis is shown up a little. The steering suddenly feels totally aloof and the body lurches dramatically from side to side, with not quite the precision and agility you may expect. Ultimately, the M235i's hatchback origins are evident once you ask the most serious questions of its chassis. Absolute on circuit brilliance would perhaps be the job of an M2, or at least the rather tasty looking M235i Racing...

At the very other end of the dynamic spectrum, the M235i was comfortable and refined at motorway speeds. It rode perfectly well enough in Comfort mode on these smooth Nevadan highways, although the wind noise from the top of the windscreen did disturb the calm a little. 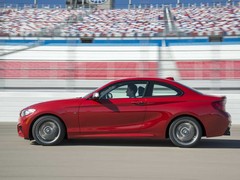 On a more engaging road, this is a car that really wants its driver to give it a proper seeing to. When driven well within its limits in the Comfort setting the M235i serves up little by way of involvement, but once hustled it awakens and tunes itself into the road surface. In the Sport and Sport+ modes, which stiffen the dampers and sharpen steering and throttle response, the chassis reveals this wonderful agility and mobility around the limits of grip.

Out of second and third gear corners it'll power away with a neutral to oversteer attitude, and it tips into faster corners very positively indeed and simply holds its line at speed right up against the limit of adhesion. Whereas on circuit it could feel out of its depth at times, on the road it manages an infinitely appealing trick of at times feeling like an overpowered miniature hot-rod, and at others a precise and delicate sports car.

The steering, however, remains uncommunicative, which means that you take time to learn where the limit of grip is rather than simply driving right up to it at the very first, and the stiffest suspension mode will probably be undone by a particularly scarred British B-road. There is, however, endless joy in that drivetrain, for the sense of connection between the throttle pedal and the rear contact patches feels as intimate at that between a puppet's limbs and its strings.

Also good value for money and with a classy cabin, the M235i is a superb overall package, if not quite perfect. It is the best non-M car that BMW makes.