Finally, we get behind the wheel of the M4 and M3

The speaker-enhanced induction noise is a bit irritating at times. And the electrically-assisted, progressive rack steering isn’t the last word in feel or feedback. 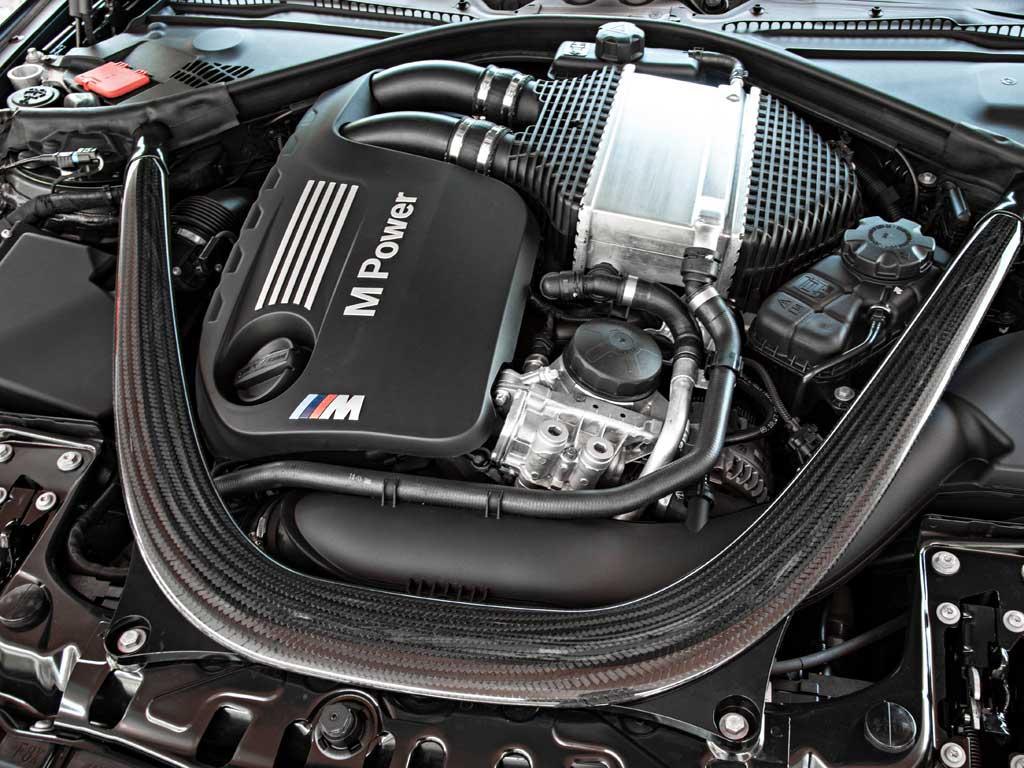 M revives the art of the beautiful engine bay

So that’s the bad news out of the way.

Looking in the rear view mirror whilst making progress in an M3 probably isn’t the most sensible. But the sight of a freshly painted stripe of Michelin’s finest on shimmering Portuguese tarmac is an irresistible distraction. That this came from the outside rear wheel, yet tracks perfectly the arc of the central road markings, tells as much about the dynamic characteristics of this fifth-generation M3 as any spec sheet.

Still not up to speed on the data and tech? We’ve got you covered in our preview story here. 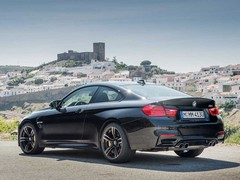 Out where it matters, frankly, we’re having a ball. PH has bagged one of just a couple of manual M4s among a launch fleet dominated by M DCT equipped Yas Marina Blue M3s and Austin Yellow M4s. Which is probably a neat analogy for the likely sales split. On E46 the manual/SMG split was about 50/50. When the dual-clutch M DCT came in on the E9X range it settled to about one in four buyers sticking with a manual, globally at least. Our UK PR man reckons it’ll be 85 per cent DCT in the UK for the new F80 M3 and F82 M4 range.

But we’re die-hards, right? Hence the PH beachtowel going down on the sinister black coupe. Rowing a stick shift around on a car as tech-laden as this does seem a little anachronistic truth be told. And though it’s better than many it’s still a very BMW manual shift, which is to say a bit rubbery and somewhat off the pace of the rest of the car. 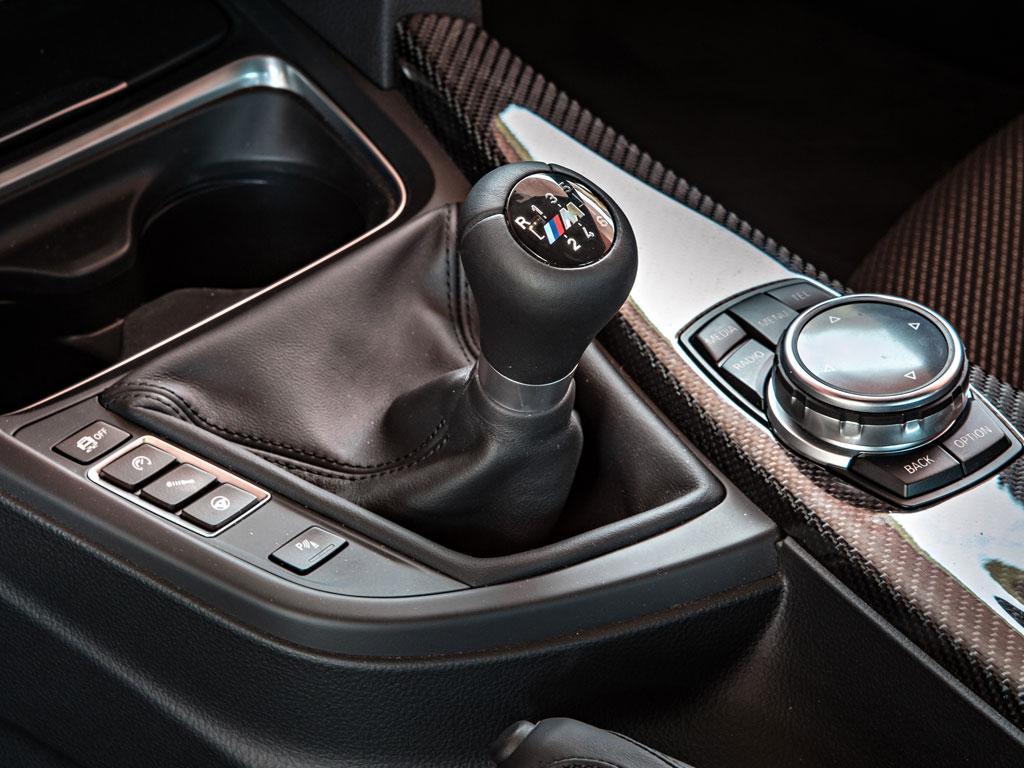 You don’t flick up and down the ’box as you do with the paddle-shifted M DCT, rather you plan ahead, make your gear choices deliberate and considered and hold the ratio longer than you might otherwise. Downshifts get auto blipping, heel'n'toe purists able to do their own thing with the engine in Sport Plus mode.

Which is good, because it means the engine gets to show off how broad and expansive its power band really is. Unrelated to any other BMW straight-six turbo, the M3’s new twin-turbo feels like an authentic M engine, with a hint of classic RB26 Skyline motor on the side. Listen hard and you might catch the odd chuff from the small, low inertia turbos but the aim has clearly been to disguise the forced induction as much as possible. Peak torque of 406lb ft is there from 1,850rpm and your full 431hp is there until 7,300rpm, the curves’ peaks intersecting at 5,500rpm. Basically the whole span of the rev counter is your playground but it’s very happy in the upper reaches. It was never going to match the searing howl of the old V8 and it's 8,000rpm-plus hedonism but for a new-school forced induction engine it's mighty impressive and with a character of its own. 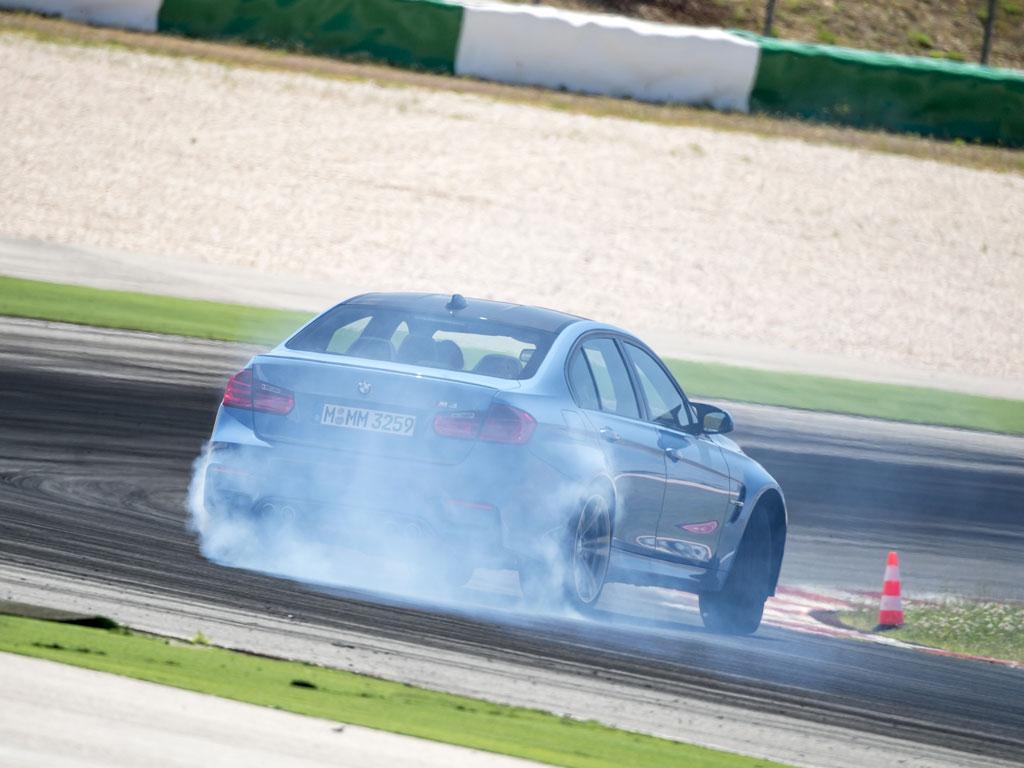 And the way it interacts with that fully active diff is proper witchcraft. Exit a corner with a hoof on the throttle and there’s no destabilising wodge of torque like you’d get in a M135i or other ‘regular’ BMW turbo six. Just an increasingly more involving interaction between the engine and rear axle.

With the DSC on you’ll get a lot of orange flashing lights and tugging of leashes, even on a dry road. You need at least M Dynamic Mode to get a sense of the diff locking and unlocking, sending power this way and that. Traction is impressive, DSC, diff and dampers all working together to deploy as much power as possible even when hitting mid-corner lumps and bumps. In all three modes the damping is sublime; fast, slick and always managing weight transfers with casual disdain. And when you start pushing the limits and those black lines start appearing on the tarmac it’s wonderfully progressive and readable. 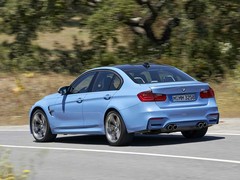 Fatter arches give M3 a ruder look than coupe

And that’s the magic of this new M. Everything works in harmony. True, that steering doesn’t give you a huge amount of feedback. But it is trustworthy and front-end bite is immense. At pace you’ll hear chirrups indicating how hard the front tyres are working but understeer just isn’t on the menu and rotations from neat and tidy to properly lairy simply a matter of how bold and early you want to be on the throttle.

In an age of dumbed down performance cars this single-minded focus is hugely refreshing. Put simply? It’s proper. If we’re being picky a faster rack would give something more convincing to lean against than three-mode artificial weighting. And that's about the only real gripe.

Neat and tidy
On a track you try and drive it in a neat and tidy fashion. But it’ll take all of a couple of corners before thoughts of the racing line disappear, turn-in points get earlier and power applications more aggressive. MDM will cleverly juggle diff and stability control to let you hold a respectable amount of angle; switch it all off and it’s even more transparent and predictable, the angles even more outrageous. In the dry you’re going to be getting through a lot of tyres. In the wet things might well be somewhat lively. 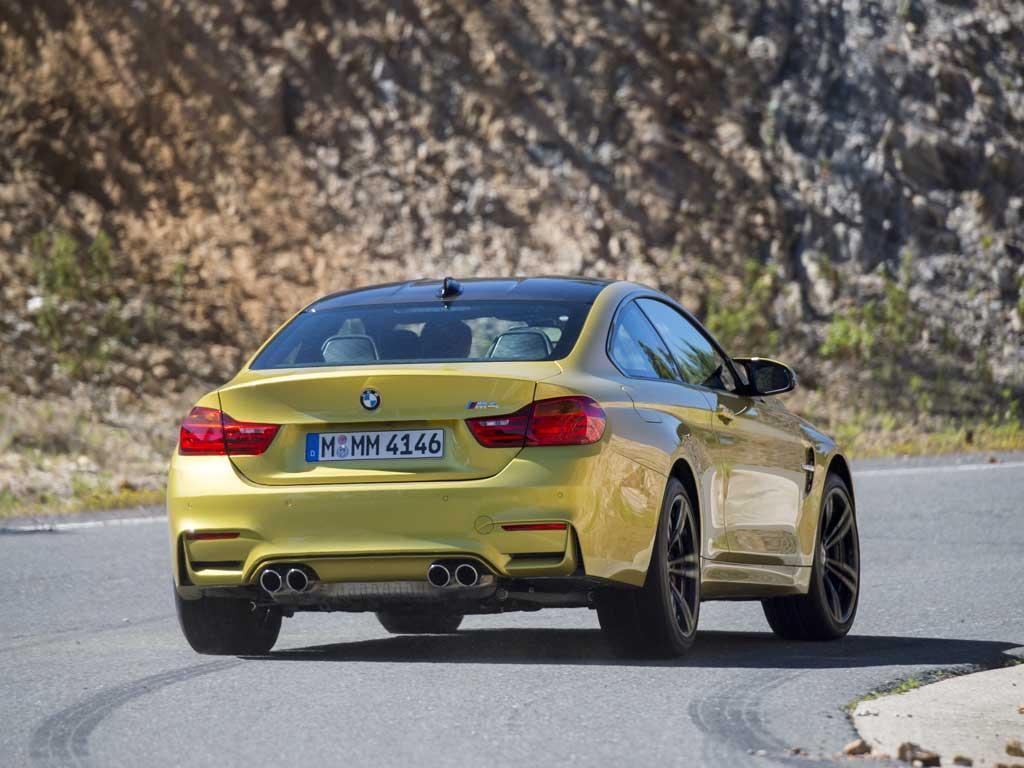 If you drive the manual deliberately and proactively the M DCT car is all about instinct and being able drive it just slightly out of your comfort zone. Need to shift on corner entry? Just flick the paddle. Upshift mid drift? Likewise. The harshest of the shift speed settings will still chirrup the tyres on full bore upshifts for a sense of the old SMG thump in the back but it’s in a different league of sophistication. Hand on (heavy) heart it’s the cherry on the top of the cake and while it’s great there’s still a manual option the M3/M4 is all about the complete package. And the DCT makes it that. Oh, and you might want to scrape together another 6,300 for the ceramic brakes which are both grab- and fade-free. And have natty gold calipers for additional bling.

M3 saloon or M4 coupe then? Thus far the comparisons have been interchangeable, as much for convenience as anything. And on the road they’re functionally pretty much identical, with all the settings, functions and measurements as close as dammit to identical. 47mm lower, the M4 is a slightly favourable centre of gravity but really the choice is going to be one of image and practical needs. 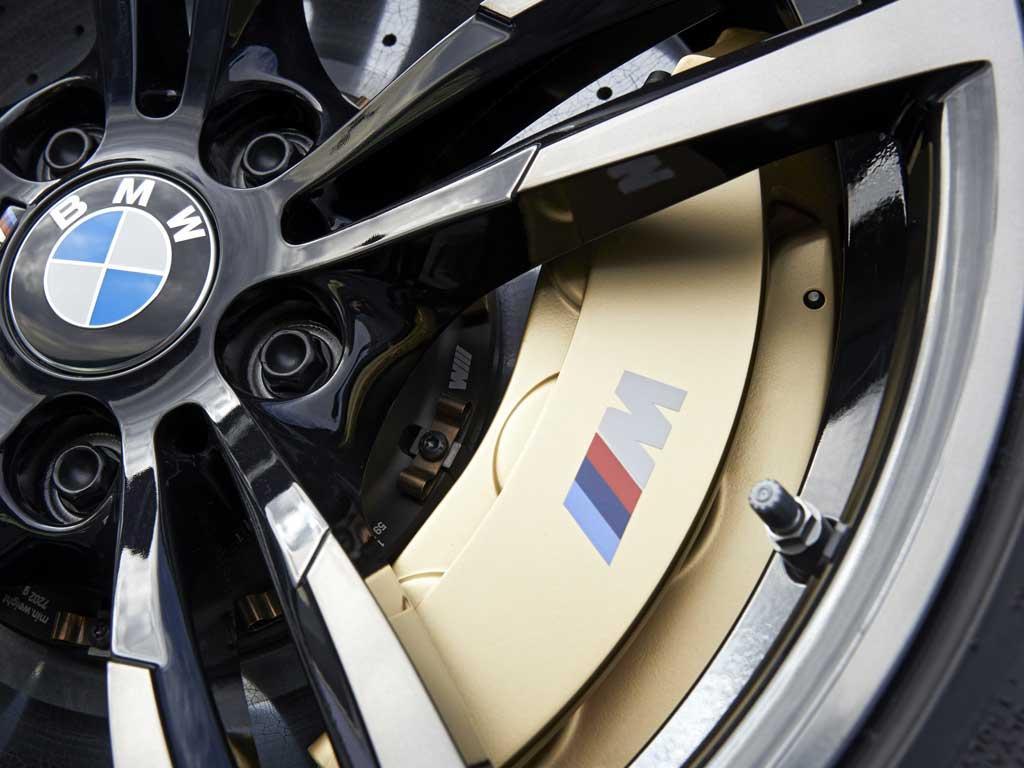 Ceramic brakes for the first time on an M3

Ironically the grafting of M4 rear track onto the saloon body has resulted in a more dramatic transformation than with the coupe. And though M3 coupes have traditionally far outsold saloon equivalents as the sole recipient of the celebrated badge and blessed with those more aggressive looks the saloon deserves to stand on its own.

As usable day to day as a well-equipped 320d, a proper mentalist when you want it to be and packed with delightfully geeky engineering details to set it apart from the BMW crowd the M3 and M4 are a stirring return to form for an M division we’d feared had lost the plot a little. You get the sense the engineers have really dug deep on this one and gone all out to deliver a good’n. The happy news is it seems they truly have.

M3 on track at Portimao
M4 manual on the road