Corvette on a winter B-road? Stop sniggering at the back, it's actually rather good

Yes, it's left-hand drive only. No, Porsche, Jaguar and the rest aren't going to have any sleepless nights when it comes to interior quality. Yes, it's relatively much more expensive than it is in America but still a bargain in bang for buck terms. Covered those off? Good, now we can discuss why the Corvette C7 Stingray might possibly have nailed the formula for the perfect modern age sports car. 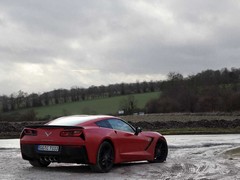 Even in the depths of winter 'vette looks sensational

of course. Albeit in California, on a track and in a 'domestic spec' with a slushbox and without the Z51 pack goodies European cars get as standard. No such niceties for our long-awaited UK drive; pock-marked B-roads, covered in standing water and mud and on winter tyres. About as far from the 'vette's supposed comfort zone as you can get.

On-paper the C7 promised much and then even more when we spoke with engineering chiefTadge Juechter at last year's New York show.

A-me-ri-ca, **** yeah!
Immediate impressions once settled within are more straightforward though. The view out is as distinctive and evocative as it is from the outside, with the peaks of the wings dipping low and then back up into the bulge over the top of the 6.2-litre LT1 V8. Chevrolet is proud to boast that this engine is both 10cm lower and 18kg lighter than a coyly unnamed 'competitor' 4.4-litre twin-turbo V8 with comparable power that may or may not be Bavarian in origin. Like previous Corvettes, the perspective is a widescreen view of the road ahead, the low dash and bonnet line meaning decent visibility and making up for being on the 'wrong' side of the car. 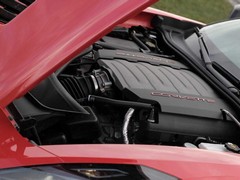 The engine is savage even on start-up and the seven-speed manual pleasingly gritty and mechanical in action, with a short throw and positive gate. The clutch and steering are light though, diluting that unapologetic MTFU vibe of driving what is basically a bright red phallus. You a want subtle and nuanced expression of your driving ambitions? Wrong place.

Monkey business
Trundling out of London and onto the M4 in search of more interesting roads there's a lot to play with and distract in the Stingray's cabin. The Driver Mode Selector - or 'fun dial' as Juechter describes it - cycles through Weather, Eco (honest), Touring, Sport and Track and each is configurable through 11 different parameters. Though probably not while on the move via the slightly Fisher Price touchscreen. Especially not when an S65 AMG limo draws level alongside in the fast lane, the rear window opens and Harris leans out, both thumbs aloft. The chances? 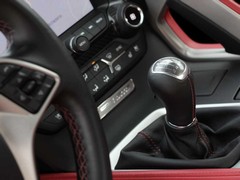 ...and one of these connecting it to road. Win!

S65's lights blazing a trail the 'vette is happy to burble away in seventh gear pulling 1,500rpm at the legal limit. And you know what, it's actually quite relaxing. Tour mode gives you the softest of three damper settings and the Stingray bounces along crisply but comfortably on a chassis reconfigured for European roads compared with the standard US spec. This, inevitably, has involved time on a certain German race track.

Which when the Stingray reaches the A338 and things get a bit more involved really begins to show. One click into Sport on the dial brings up mid-way dampers, Sport steering/throttle and Mode 2 on the active diff if you've disabled the traction control. Another into Track mode changes the dash display and HUD to that of the C6.R race car, puts the dampers, steering and throttle into Track, makes Mode 3 on the diff 'available' and likewise the Performance Traction Management mode. 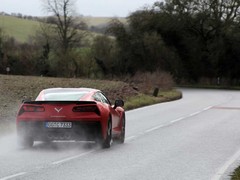 Even in these conditions traction is impressive

What, and you thought the Stingray was all knuckle dragging meathead? Once upon a time, perhaps, but with the C7 GM has laid significantly firmer foundations - 57 per cent greater stiffness but 45kg less weight in the new aluminium space frame and five times stiffer steering gear - onto which the basics of a sodding great V8 and manual gearbox have been attached. Overlaid with some electronic sophistication the equal of anything built this side of the pond.

In its default modes the Stingray feels its size, the nose leading the way into the corners and flimsily weighted and not especially talkative electric steering compounding the unfamiliarity of sitting on the left side. It's an odd mismatch, being in such a large and potent car, managing a somewhat feral engine and agricultural gearbox yet still feeling somewhat remote from the action. 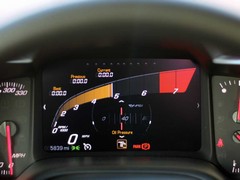 One thing there is no doubt of though -

is magnificent. It lugs from way down in the revs - it'll pull uphill from 30mph in fifth - but whips round like a flat-plane V8 when you're pressing on and demanding throttle blips on downshifts. The pedals are perfectly positioned to do this yourself or with a tug of the paddle you can toggle the automatic rev matching on and off. The visceral whip-crack of pops and bangs when you do it yourself is magnificent though. Only the seemingly mean redline disappoints but given the length of the gearing even in second you'll be in court appearance rather than points territory on a British B-road by the time the limiter cuts in.

Muscle vest
By now you're thinking 'big noisy V8, vague steering - yawn' but push on in Sport or Track and suddenly the 'vette gets clever. In Mode 2 the diff opens up to aid turn-in and the weightier steering, still lacking in feel admittedly, gives you something to lean on as the power feeds back in and the diff begins to lock. 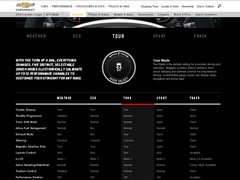 In Mode 3 (available in Track mode with everything off) it's even better, working with the Performance Traction Management in a similar way to Ferrari's F1 Trac system. To the point where roundabouts, even in the wet and on winter tyres, can be taken perfectly balanced with the pedal floored, the front wheels squealing and engine 'ba-ba-ba-ba-baaaaap' against the traction control as the rears give you as much as the grip levels will allow. Very clever. Very impressive. And with the potential for the world's biggest 'watch this' disaster if you've selected the wrong mode...

Back in the real world the Stingray suddenly feels keener to turn in, easy to balance on the throttle and much more chuckable and playful than a car of this size a has a right to be on a soaking wet winter B-road. 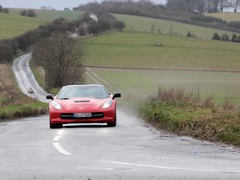 Who says Yank tanks don't work in the UK?

And this would be impressive in any context. And then you keep coming back to the price. A Carrera 2 S with a Powerkit and diff would cost you £93K. A V6

is a closer run thing but heavier and at comparable money down on power so you'd be spending £80K-plus to get a V8 with equivalent chassis tech. It begs an interesting question too - if you were Les Edgar and wondering where to pitch

where do the Corvette and F-Type leave you to go? The faithful would say 'a V8 and no electronics' but the Stingray gives you such a compelling blend of hairy chested thrills AND sophistication the only elephant in the room remains LHD.

Which remains a problem until that first toll booth on your pilgrimage to Le Mans.