I love the motor industry: just when you think it has been standardised into a series of predictable formats, a car like 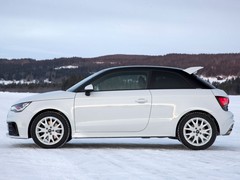 As we all know, the A1 shares its platform with the students' favourite the VW Polo. In having 256hp, it opens itself up to being described as a near-260hp Polo, which is actually a very cool association to foster.

But more bizarrely for a shopping trolley boasting the power-to-weight ratio of a Porsche 964, the narrative behind this car is actually as interesting as the finished product.

You see Audi has a strict hierarchy of fastness. Its normal cars are developed by certain teams, the hotter S models go to a group fed on slightly spicier food and the RS versions - the fastest of all - always go to the people at Quattro GmbH, who dine exclusively on Scotch Bonnets. 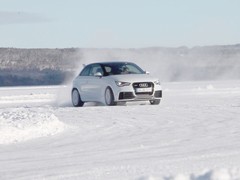 Harris goes all rally style in the baby Quattro

The A1 Quattro is a very hot little car. That 256hp from the 2.0-litre TFSI motor is supported by 258lb ft and Audi claims 0-62mph in 5.7sec. In fact it's about as potent as we'd expect an RS1 to be, and yet it has been nowhere near Quattro GmbH.

That's like BMW launching the 1 M Coupe and not consulting the boys at M. Ask Audi why this is the case and it says the team at Quattro have been busy on other projects (RS4, revised R8 etc) but it does seem strange that the company has circumnavigated its own, it has to be said hard-earned, performance heritage to launch one of its silliest cars for many years.

There are over 600 changes to the A1 to make this car, and herein lies another area of suspicion. Audi is making just 333 of these cars (no significance to the number, it just 'likes' it), all in left-hand drive, and yet it has made alterations to the body in white to swap the rear torsion beam from the standard car to a multi-link set-up that accommodates the rear running gear. 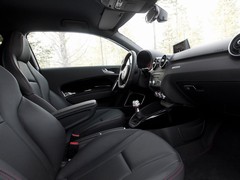 The fuel tank is now saddle-shaped to make way for the prop-shaft, there are new front suspension components and, naturally, a completely revised set of spring and damper settings and, flying completely in the face of other fast Audis, it comes with a manual gearbox only. It all rather looks like Audi blowing a raspberry at Quattro GmbH. To add insult, it also uses the Quattro badge in a markedly Ur-fashion.

And do those read like modifications that members of the board of Audi would okay for use in just 333 cars? Correct: we were not born yesterday. Homologating the new fuel tank alone probably absorbed the budget Lotus spent on the entire Evora project. There will surely be other 4WD A1s, some may even wear S and RS badges. One might even be an Allroad. 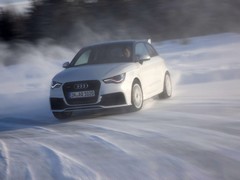 Now you might have noticed that I have avoided talking about the way the new A1 Quattro drives. I apologise for this, but there is a reason. I don't really know how it drives. I spent half an hour driving it like a wally on a frozen lake, during which time I deduced the following.

Despite weighing 1,300kg, it is surprisingly fast. The gear ratios seem quite long and throttle response is pretty sharp. The exhaust makes nice parpy sounds when power is cut suddenly.

The Haldex 4WD system still feels front-biased (because it is), but on small studs and a frozen lake it'll hold great big, all-four-wheels-pointing-in-the-same-direction slides that are immense fun. But don't actually give any indication of what the car will be like on the road. 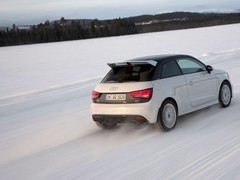 After this I met Stig Blomqvist, who was quiet and heroic, just the way you want your heroes to be, but that didn't give me any better idea of what the A1 Quattro was like to drive.

Nor did a few thoroughly enjoyable laps on the ice in a revised RS5, with a new electromechanical steering which was so light at standstill I thought the wheel had come loose, and a few detail changes. And which was fitted with the optional sport differential.

The car was just brilliant on the lake, it didn't understeer at all and actually exposed the weaknesses of the A1's Haldex system which does occasionally make the wrong call and punt all motive forces to the front wheels, right at the moment you want all drive going to the rear. Does this alter my opinion of the RS5 on the road? A little bit, but I still don't rate it as a road car.

None of this really matters. Only 20 A1 Quattros will come to the UK costing £39,930 each. 14 have already gone. One will be kept by Audi UK for its historic fleet. In the context of what else is available for the money, the car is laughable. For those who want the ultimate Waitrose chariot, it is probably the most desirable car on sale, oozing with Audi detail, style and showroom pizzazz.

And it isn't the last fast A1 we're going to see. Happy days.