Mercedes adds a surprising dose of sophistication to its sledgehammer saloon 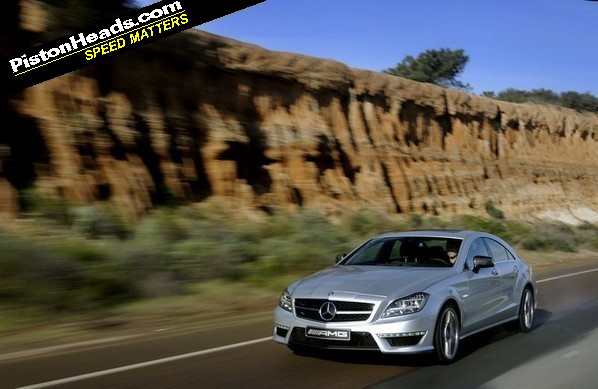 Thunderous tailpipes are generally one of the highlights of any AMG experience and the new CLS 63 doesn't disappoint. On a rapid interstate climb out of San Diego heading towards the Mexican border on the official press launch last week, it especially didn't disappoint the multitude of centre lane crawlers who got the benefit of 8 full-bore exhaust barrels in stereo as PH and some equally irrepressible 'media colleagues' outflanked them on both sides at possibly unexpected 'velocidades'. 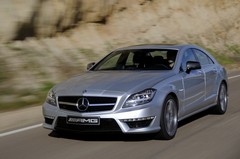 This being America and the home of the V8, the manoeuvres seemed largely well received - at least if slack-jawed astonishment or excited giggling can be reliably discerned in a rear view mirror. AMG's latest biturbo 5.5-litre V8 might have given up a few cubic inches in the name of environmental responsibility (sic), but it still sounds spectacular from inside the car. And from outside it still sounds like a good old-fashioned war.

Given the loud and irrefutably soul-stirring tones of a typical AMG V8 exhaust across its rev range, I'd always innocently assumed the noise came out that way by default. Unreconstructed, and like a force of nature if you will. Chatting to a powertrain guy on the launch team, it seems AMG spends just as much time fiddling with the acoustics as other premium car makers, but they do seem to go on about it a bit less during press briefings. The knowledge that there's artifice involved needn't diminish a beautiful experience of course, although I'll spare you the breast-augmentation metaphor that AMG's SoCal launch location originally inspired...

The fast freeway ride out of San Diego was a great opportunity to relax into the new CLS 63, to get to grips with its fully featured control systems, and (in my case anyway), admire the new interior design which is stylish, refined and generally beneficial to one's overall sense of well-being.

You're probably already familiar with the crisply emphatic exterior treatment of the new CLS 'four door coupe' and, although some PHers have expressed reservations and prefer the look of the old one, I'm becoming increasingly admiring of the current M-B styling direction. It's distinctive and unapologetic at least, and the showroom-detailed press cars looked terrifically glamorous under the California sun. (Dahlings, didn't we all...) 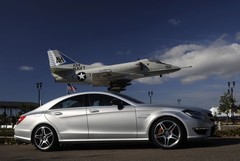 As you've probably already spotted, the CLS 63 is easily distinguished from its lesser siblings by a more sculptural bonnet, flared wheel arches and a mean-looking front apron with a black painted lower cross-member. The rear gets quad tailpipes, a diffuser-style rear apron, and our 'Performance Pack'-equipped machine even got a carbon-finish lip spoiler on the boot, and gold-painted brake callipers. A shiny V8 BITURBO script runs along the sides.

The AMG effect inside brings piano-black trim panels (unless you want another finish), AMG sports seats in nappa leather, and an AMG steering wheel, which is much like a regular steering wheel, but with gently flattened polar regions. It also sports a pair of aluminium shift paddles, but more on those later. 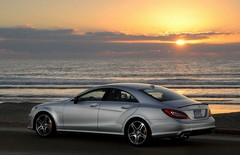 My first thought on sliding into the driving seat was how the view out of this CLS seems to have improved over the last one. I wouldn't swear to it without a back-to-back comparison, but the new car's windscreen pillars seem slimmer and visibility much improved. The seats are comfortable, supportive, and in our car would warm or cool your backside on demand, which was charming. And with a whirr here and there from the seat and steering column motors, there's surely an ideal driving position to be found for backsides of all shapes and sizes.

Drive is selected via an SLS-style lever on the centre console, which looks nice but has an electronic Park button instead of a slot for the lever. This means casual users brought up on regular auto shifters, or at least absent-minded/careless hacks, may find themselves shoving the lever all the way forward (for Park), but actually only selecting reverse before jumping out of the car with the engine running. (Okay, Okay... it happened to me while I was photographing Merc's white Gullwing last summer and, were it not for my gazelle-like reactions to the sound of tyres crunching on gravel, an embarrassing phone call to the press office would have ensued. And the mother-in-law would now own a carport instead of a garage.) 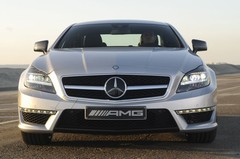 The gearbox itself is Merc's latest MCT 7-speed unit, with a wet clutch instead of a torque converter. It's combined with a stop-start system that, given the rumbustious nature of the engine, is unsurprisingly less than imperceptible in action. Fortunately you can disable the stop-start function, because surely nobody buys an AMG to make faltering getaways at the traffic light grand prix?

As if the standard V8 isn't monstrous enough, the performance pack boosts power from 525hp to 557hp, and torque from 516 to 590lb ft. Thus configured, the words 'seriously rapid' scarcely do this madcap machine justice.

In auto mode Sport Plus, the car will accelerate to 62mph in 4.3 seconds, and there's seemingly no let-up in acceleration after that. It's relentless, presumably all the way to the electronic limiter at 185mph if you've got somewhere to do it. But the most exciting thing about this car is that it's by no means at its best as an autobahn bruiser. 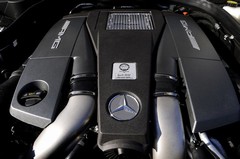 The AMG car's bespoke suspension is steel up front, with air at the back, and there's three-stage adjustable damping through Comfort, Sport and Sport Plus. On our trip the AMG team confidently sent us on a route up in the mountains that would have seriously challenged any car. Yet tortuous twists and awkward camber changes were shrugged off with ease by a chassis that never once found itself out of sorts with the conditions.

Thanks to big, bitey brakes and with the ESP/traction and powertrain set to Sport or Sport Plus, the car seems able to hoover up the tarmac anywhere, however vigorously the road twists and turns to get away from you. The gearbox electronics are genius when driving fast across country in auto mode too, combining seamless shifts with delicious throttle blips (and exhaust 'brrraps') on downchanges, and all with a perfect sense of timing that suggested the car had somehow covered the same ground before and remembered it. In fact, so good is the 'box at deciding what gear you need - or indeed are about to need - that I gave up trying to second-guess it at all with the paddles. My own manual shifts never seemed as perfectly timed, effective or smooth, so I happily conceded control to the machine and got back to enjoying the drive. 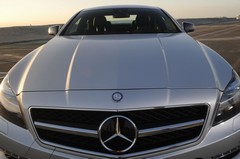 Super-accurate and beautifully weighted steering is provided by an AMG-specific rack with a more direct ratio, and which has been designed to provide early feedback of the onset of understeer. It's a condition that takes some finding on the road, as one of this machine's sweeter attributes is a front end that responds faithfully to its steering, and turns in with a directness and precision that belies the car's size. When understeer does appear, there's never a shortage of power to redress the balance at the other end, but during cornering the enthusiastic driver of less than god-like ability is far more likely to default to feeling the back end slip sideways momentarily under power when using the ESP/traction control as a safety net. (Assuming you've selected a Sport set-up. In Comfort mode, heavy right foot antics are ruthlessly overruled by the ECU.) 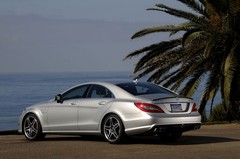 Seriously refined ride quality (which is even bearable on most surfaces in the Sport Plus damper settings) adds to a thoroughly rewarding experience, and one which has led other reviewers to name the CLS 63 the best AMG drivers' car to date. It certainly moves the AMG saloon concept on from bruising motorway 'hammer' to something far more sophisticated.

It's presumably just a coincidence that one of California's top natural predators is the Jaguar, because arguably for the first time the CLS 63 AMG is stomping all over territory previously marked out by Britain's supercharged 5.0-litre 'big cat', the XFR. The Merc is likely to be a fair whack more expensive than the £65k Jag I suppose (prices are still TBC), but the first on-road comparison will make interesting reading.