Why has it taken Morgan so long to bring back the three-wheel car?

Perhaps it's because a three-wheeler has such a very limited appeal, so why bother? The recent - mostly objectionable - connotations of invalid cars, Del Boy and the Bond Bug certainly tend to swamp the fact that there were some genuinely desirable examples rather earlier on. All of them built by Morgan. 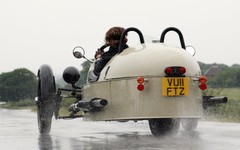 But now we have the Morgan 3 Wheeler in its brand new 2011 guise.

Unveiled at the Geneva show in March,

it's a new take on the old theme, one that remains remarkably true to the spirit of the original.

The bullet-shaped bodywork, V-twin engine out front and the ash frame for at least part of the structure are all there. It looks absolutely right - how could it not with the exhausts running from each cylinder down each side of the car?

The Geneva car had Harley Davidson power, but things have moved on, with Morgan tying up a deal with S&S, fettlers of Harley engines and manufacturers of their own 1,910cc V-Twin. This 56-degree power unit sits proudly up front in the Morgan, gleaming between the arms of the tubular front suspension. 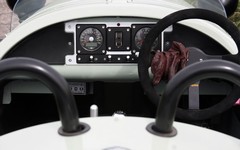 There are mental adjustments necessary for those whose knowledge of bikes can be written on a thumbnail. The power is just 115bhp, so with a specific output of 60bhp per litre it's well below that of most petrol car engines. The other oddity is the drive to the rear wheel. It's via a belt.

But Harley does belt drives for its bikes, and the story of this S&S engine is as much about torque as it is about sheer horsepower. Its kerb weight is 500kg, so the Morgan 3 Wheeler still measures up on paper.

With the road test car temporarily out of action due to a trivial earth lead problem, PistonHeads took another example with an amusing straight through exhaust. It crackles and pops and draws the crowds, not that the 3 Wheeler needs any additional head-turning ability - people stand and gawp anyway. 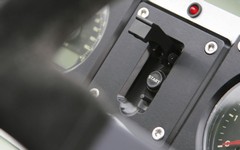 The very low seating position, aero screens and elbows hanging over the side make the Morgan feel fast and involving even at sub-30mph speeds. In our book that's always a great attribute - the possibility of fun at legal speeds can never be disregarded.

Get stuck in and the S&S thumps away with a slightly uneven beat, giving its best in the mid-range with genuinely urgent acceleration. Morgan estimates it will reach 60mph in 4.5 seconds and reach 115mph, blinding figures for a car like this if they really measure up.

But outright performance figures are not for this test. The miles we have with the 3 Wheeler are as much about acclimatisation as anything, for you don't jump into this and immediately exploit it as you might with a new 911. What's instantly clear is that that there's little need to approach the 6000rpm redline, for the torque in a higher gear will give more comfortable, linear progress that allows for concentration on the front wheels. 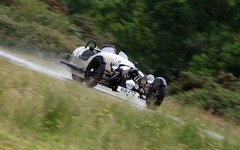 Oh, the front wheels. They dominate the driving experience. It's impossible to take your eyes off them. Even when you're looking far ahead, there they are in the corner of your eye, dancing up and down and twitching every time a slight steering correction is made. Sheathed in mudguard and inner spat, the four-inch-wide tyres from a pre-war MG look totally inadequate, but at the same time totally appropriate.

Modern Avon compounds means grip is strong. Combined with the quick steering, this little Morgan can be hustled along winding roads with the enthusiasm of a Caterham, yet placing the front wheels accurately is even easier. The suspension compliance is something Morgan appears to have got right straight away, for this little car rides surprisingly smoothly too. 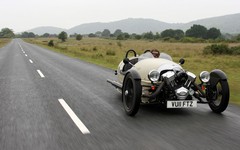 Like the steering, the brakes are non-assisted and need a healthy shove, but they are effective. The gearbox is a five-speed unit from the MX-5, the tight gate suiting the Morgan's character well. From there the drive passes to a specially made transfer 'box behind the seats and then that belt takes on the final stage to the rear wheel.

It's big, that rear tyre, more superbike than vintage car, and it's been the subject of some mutterings on the forums from those who reckon it will prevent the new 3 Wheeler from drifting like the originals. They may well be right, but Morgan reckons the game has moved on.

The interior is snug, very snug and with two people on board shoulders touch. The image of the driver and passenger with arms hanging over the side is not for effect either; it's a necessity. But this is a good place to be. With one key exception, everything is bespoke to Morgan, with delightful square instruments and machined switchgear. 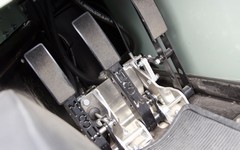 The starter button is the bought-in component. Flip up the cover in the centre of the cockpit and beneath is a bomb release button from a Euro Fighter. We like that.

In practical terms, the Morgan 3 Wheeler makes a Caterham feel like a sensible family car. There's room for a single squashy bag by the back wheel, though a rear-mounted luggage rack is on its way. There is no roof, nor indeed doors or a heater, but we are guessing this didn't bother owners of the original version, so why should it now?

The fact that Morgan already had 500 firm orders under its belt before anyone had even seen the finished article shows there's much more to desiring this car than can be explained away by simple logic. How otherwise can the £30,000 price tag, or the optional graphics of bullets, pin-up girls or full RAF livery possibly be explained away?