What do you get if you cross a GT-R and a Nissan Juke? The answer is definitely not a joke, says Adam Towler

Nissan would like us to see the Juke as a possible performance car. I know, I don't quite get it either, but the unusually styled crossover-coupe-thingy that's apparently selling rather well in various global markets forms a key part of Nissan's new bid to be 'sporty'. 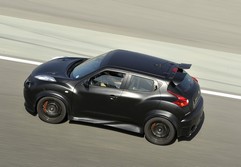 There's already in production the 190hp, 'DIG-T' 1.6-litre Turbo Juke, with four-wheel drive that includes torque vectoring and a CVT-only gearbox. Sure, you won't be trading out of a Renaultsport Clio for one, but the recent debut of the Juke Nismo concept proves that Nissan is serious about this new direction.

As Nissan puts it, instead of another TV advert - probably featuring some deserted south-European city and lots of CGI - to try and cajole people's perceptions of both the Juke and Nissan as a whole into a more sporting direction, they've decided to create something a bit more edgy and visceral; something a bit, 'crazy'. Enter the Juke-R. 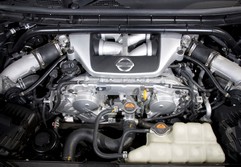 How the Juke got its R

Of course, Nissan also happens to make another, rather more serious to say the least, turbocharged, four-wheel-drive car: the GT-R. And so it was at a brainstorming meeting in the UK that the idea surfaced to combine the two cars, thereby creating the fiercest Juke of all time.

Nissan has a major presence in the UK, with not only the Sunderland manufacturing facility but also NTCE - their European technical centre based at Cranfield - and NDE, their London-based design studio, but although both subsidiaries would take a role in the project, the two Juke-Rs were actually designed and built by racing team Ray Mallock Ltd (RML). 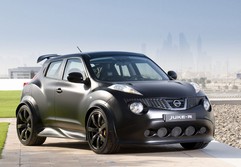 Given just 22 weeks to complete the project, the RML team led by Michael Mallock (race driver, son of the company founder and now the firm's Business Development Manager) began by referring to the CAD data to see if this unusual project could be anything more than just fantasy. When it became clear that it might work, the next step was to see how the GT-R's high tech running gear - specifically the software that governs the four-wheel drive system - would react to the different wheelbase and weight distribution when stuffed into the Juke's 'shell.

Slicing a brand new GT-R into two pieces doesn't really bear thinking about, but that's what the team did to create their test GT-R, complete with shorter propshaft and a 250mm reduction in the wheelbase. On completion this was taken to MIRA and put through its paces; the result was apparently far less dramatic than had been feared. The GT-R's brain for the most part reconfigured itself to its new surroundings, with only minimal new programming required. 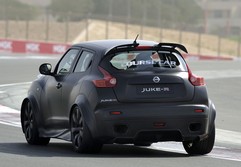 Reassured that the components would squeeze into the shell - particularly the great slab of internal combustion fireworks that is the twin-turbo V6 - and that the chassis would adjust to its new surroundings without recourse to pricey and time-consuming modification that the scope of the project wouldn't allow for, the next step was to go for the build.

With backup from NTCE and NDE, two, brand new, unsuspecting Jukes were delivered to RML in Wellingborough. Along with them arrived a brand new GT-R, and a lightly used example: all four were destined for major surgery.

With one of the Jukes in the workshop braced by an external cage-like structure, the floorpan and much of the bulkheads were cut out and the GT-R engine, 'box and running gear fitted in with, understandably, much detail work to the structure to make it all fit. 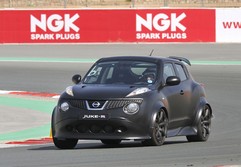 Approach the Juke-R and you're struck by just how steroidical it looks in the metal. The track is 65mm wider at the front and 75mm wider at the rear, with the Rays alloys filling the engorged arches perfectly. Holes cut brutally into the bodywork reinforce the impression that this is a barmy car, but then you look again and you notice the height of the Juke, and its relatively upright proportions. 'Mutant' is the only word to cover it.

It's the same inside: the GT-R's complex instrumentation has been carefully housed inside the Juke's interior styling, which again is a bit of a brain scrambler. There are two OMP competition bucket seats and a full roll cage, so if you look away from the dashboard any thoughts of this being a Juke take a dive again. 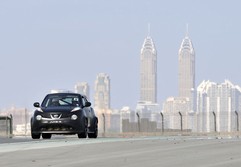 Once you're underway it's the GT-R parts that come to the fore - the superb six-speed, twin-clutch gearbox that's still as good as any 'box of this type, and the growl of the V6 along with its seismic acceleration. This is a Juke that can get from 0-60mph in just 3.7 seconds and, bar flattening your right foot and clicking the paddles, there's very little effort required to do it.

The bendy bits
Things are a little bit different when you reach a corner. Compared to a GT-R you immediately sense on turn-in the shorter wheelbase - the car points in aggressively to the corner, which gives the impression that it's very nimble. From there, the substantial - and heavier than a GTR - 1,806kg kerbweight and understeer-friendly set up mean you've got to be careful with the throttle, but the impression is that on a public road, considering the firepower, traction and superb Brembo brakes, the Juke-R would be a formidable machine. 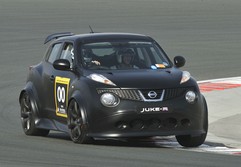 Two Juke-Rs have been built - a left-hand-drive car, and a right-hook example, but I wouldn't bet on any more appearing. Instead, expect these two to keep very busy for the foreseeable future in the press and on the marketing trail, before retiring to a comfortable life on a Nissan heritage fleet somewhere.

I've no idea whether the Juke-R makes you view the Juke in a different light, and in reality it's about as useful/sensible as a chocolate teapot. Nevertheless, viewed in a light-hearted manner it's a lot of fun, a rapid car cross-country I'm sure and, of course, suitably 'crazy'. And let's be honest - it's also a lot more interesting than another smug TV advert.