Can the simple charms of Suzuki's Junior hot hatch woo us? (Clue: the answer is abso-ruddy-lutely) 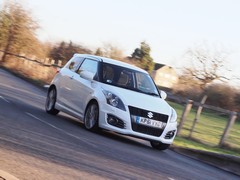 Swift Sport as fun to fling around as ever

Not that the Swift Sport is under-endowed in the technology/kit stakes, you understand - ESP, air-con, Bluetooth connectivity, cruise control and keyless entry all for £13,500 is a pretty good show in our books. But it's not equipment or value for money where the Swift Sport scores, it's in its character as an honest, straightforward and above all thoroughly enjoyable warm hatch.

Every little helps
The engine, an evolution of the old car's 1.6 (now called M16a, codename fans) is treated to a variable intake system, tweaked VVT (Variable Valve Timing) and increased valve lift, with the result that power is up to 136hp from 123hp and torque is now up from 108lb ft to 118lb ft. And it's a revvy cracker. 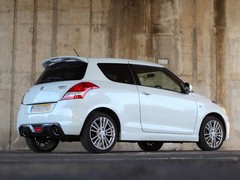 Although that torque is available from lower revs now (4,400rpm), it still feels a little overwhelmed unless you keep the engine buzzing along towards the top end of the powerband. That's no chore, though, because the six-speed gearbox is a real Goldilocks job (by which I mean neither too short nor too long in throw, and chunky without being unduly heavy. Not a blonde-haired character from a fairy tale). It's also immeasurably improved by having six forward ratios as opposed to the five of the old car,

It's not the sort of car to take traffic-light GPing, with 0-62mph in 8.7 seconds, but it is comfortably quick enough to amuse, especially since it weighs just 1,045kg. That low kerb weight also brings other benefits, namely the fact that the Swift Sport is a true joy to lob about the countryside. In fact we can't think of a more grin-worthy warm hatch, with the possible exception of the Twingo Renaultsport. 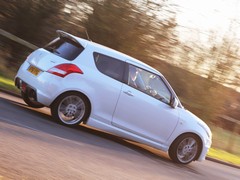 Aha - there it is

If we're being picky the firmer bushings and higher spring rates front and rear (particularly at the rear) and the generally wider, longer chassis seem to make the Swift a little less agile and adjustable than of old, but the pay-off is greater stability through long sweeping corners. And it's still easily the match of something like a Mini Cooper in terms of pointiness, with a progressive turn-in, sharp but not hyperactive steering and plenty of grip.

Alongside the pukka junior hot hatch attributes is decent economy, too: Suzuki claims a combined fuel economy figure of 44.1mpg. Now, we know trip computers tend to err on the side of optimism, and we didn't do a 'proper' economy test, but given that said trip computer averaged exactly 44.1mpg during its (heavily revved) time with us, we reckon that's an eminently achievable figure even measured properly. 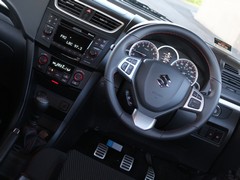 So. Decent economy, plenty of kit, bags of honest-to-goodness hot hatch appeal. What's not to like about the Swift Sport? Not a lot really. If we're being truly picky the interior design is a mite unadventurous and lacks the class of, say, a Mini's cabin. But then you'll pay for the privilege with a Mini. You might also feel disappointed by the shortage of low-down torque. But if that's the case a sub-£14k warm hatch probably isn't the car for you...