Porsche doesn't make an electric 911, but that doesn't mean you can't buy one 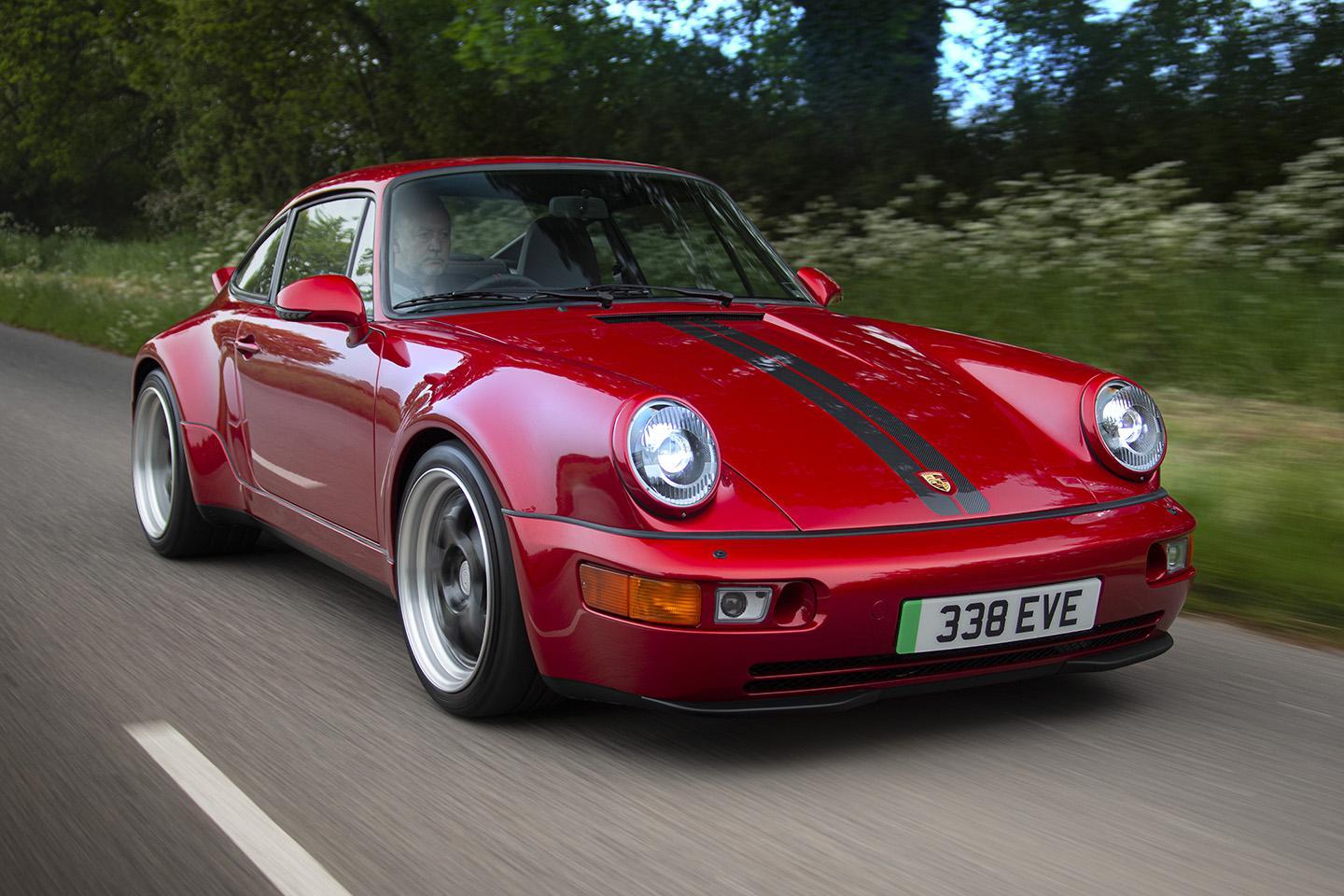 Many of you will have strong opinions about an electrified restomod version of one of the best-loved 911 generations before learning what it's like to drive. None of the next 1,500 words are likely to sway doubters from pronounced scepticism. But that isn't going to stop me from attempting the likely impossible task of stripping out visceral emotion and trying to answer the important question of what the e-911 is actually like.

Everrati's Signature isn't the first 911 EV conversion. Electric Classic Cars in Wales produced a 100kW 1979 Targa a few years ago - that one kept its clutch and gearbox - and there have been plenty of ad-hoc transplants in the U.S. and elsewhere. But Everrati's wide body 964 is a demonstrator for what the newly established British company hopes will become a series of customer cars, and also as proof of the standards it will bring to ultimate electric conversions of other classics.

For any putative EV company, a 911 isn't the easiest place to start - and especially when trying to deliver the transplant with no increase in overall weight. As anyone who has glanced under the back of an original 964 knows, mechanical packaging is tight and the need to offer respectable range has seen Everrati's car fitted with two battery packs, these positioned to help maintain the static weight distribution of the original combustion car.

The larger pack sits at the rear, with a smaller one under the bonnet, the two connected by a high-voltage cable that runs through the transmission tunnel. Power comes from a pair of electric motors at the rear, these making a combined 500hp and driving the back axle through a common input shaft and a limited-slip differential. The demonstrator uses Tesla AC induction units, but Everrati engineering director Mike Kerr says the company is planning to move to modular SPM motors from UK-based Integral Powertrain; these from the same family that powers the Lotus Evija.

With a combined 53 kWh of capacity between its two packs the Everrati 911 has a real-world range of around 150 miles. More important from a usability point of view is the presence of a CCS port under the former fuel flap at the front, this supporting DC fast charging up to 80kW, allowing then battery to go from 20 percent to 80 percent in around 45 minutes. Most 'A to A' conversions of classics haven't supported fast charging, so this is a potentially useful difference when it comes to planning longer journeys.

Beyond the green edge to the numberplate there is very little externally to say this is anything other than a nicely restored widebody 964. The Signature wears a high-quality paint finish, appropriately '90s split rims and gets a duck tail at the back. Doors, bonnet, tailgate and roof are made from carbon fibre. It also has what seem to be exhausts, these actually just resonator tubes for an active noise system which will ultimately be able to replicate the sound of an actual flat-six. (Or pretty much anything else you'd like to choose.) Beyond a synthesised idle to prove it works, it stays switched off during my drive.

The cabin has been given a quality re-trim, but changes are equally subtle: the rev counter has been repurposed as a flow/regen meter and the supplementary dials keep their analogue needles but now report on the battery's state of charge and voltage and the temperature of the packs and the motors. (The need for heat management means this air-cooled 911 has made the switch to water cooling, with separate circuits for batteries and the motors.)

The driving experience feels deeply odd initially, and barely less so after an hour in the car. Turning the ignition key to its furthermost position and hearing silence isn't a particularly unusual experience in an elderly 911, but the ability to still move off without the busy chatter of a flat-six certainly is. I'm immediately aware of some other noises, with the 12-Volt pumps for the vacuum servo and continued use of hydraulic power steering obvious at low speeds, together with suspension and tyre noise that would normally be masked by the engine.

The Everrati's brake pedal only works with the regular friction stoppers, these featuring chunky Brembo upgraded discs, but the car also has powerful regenerative retardation on top of this which makes it possible to pretty much one-pedal it at everyday speeds. (Although with the need to remember that, without an electric handbrake or any automated braking, the car won't hold itself when stationary.) The throttle pedal works even better: within a couple of seconds of passing the first derestriction sign my internal organs are feeling accelerative forces that no contemporary 911 would have been able to generate in period. Yes, it is properly quick, although with a very slight delay between inputs and feeling the full fury arrive.

It is also initially disorientating. No gear changes makes the Everrati feel even more potent than its power and weight numbers suggest it should. But they also deny the sensory shorthand that most of use use to gauge velocity, even in a automatic when you soon learn to associate different engine notes with cruising speeds. I've experienced this disconnect in other potent EVs, especially the Lotus Evija prototype, but it feels much more incongruous while sitting in what remains very obviously an '80s 911.

Yet the acceleration is delivered with a commendable lack of drama, even on a full-bore standing start. The Everrati is apparently still using Tesla's traction management algorithm to prevent slip, and with this limiting the motors' combined torque to no more than 368lb ft. But the combination of dry tarmac and Michelin Sport Cup 2 tyres seemed capable of digesting this output without any obvious intervention, although it did suffer the unmistakable sensation of the motors de-rating slightly after a couple of keen runs. Everrati claims a gearing-limited 130mph top speed, which is obviously a fair way short of what the car could manage with its original engine, but it's still pulling hard well beyond the speeds the prudent would choose to cruise at in the UK.

Although handling is impressive, it's the area where the Everrati feels most obviously different from the car it's based on. The hydraulic steering feels great - not switching to a fully electric rack was undoubtedly the right call - and it delivers impressive front-end bite. It feels much keener to turn than I remember the petrol-powered 964 being, albeit over a gap of several years since I last experienced one, and also more stable under cornering loads. Touring car and Porsche racer Tim Harvey was involved in the car's set-up, and should likely get credit for its pointiness.

But there's also something missing - it lacks most of the thrown hammer sensation which, to a greater or lesser extent, always defined the handling of air-cooled 911s. The Everrati might have the same static weight distribution, but it is obvious that much of that mass at the rear is positioned further inwards. Many of the classic dynamic traits have survived, unsurprisingly. The Signature's nose still lightens under hard acceleration and it is easily powered into slight understeering in tighter turns. Cornering line can still be lightened or tightened easily with small accelerator inputs. But after an hour I was being reminded of a Cayman more than a 964. Which isn't a bad thing. But it is a definite difference.

Which is, of course, where the 'mod' in 'restomod' comes from. These are cars which look the same yet hide big changes, none more significant than the transformation that has been wrought by Everrati. As a piece of engineering it's impossible not to be impressed; this is an electric conversion that manages to be both slightly lighter and massively faster than the car it's based on, and yet can still do well over 100 miles on a charge. Those are all spec sheet wins. And on the road it's a much more convincing conversion than either the Jaguar E-Type Zero or the DB6 EV concept I've previously experienced, both of which were limited to less than 50mph and incapable of anything like this level of hard use.

But can the Everrati match the experience of the car it snatched its body from? That's a straight no: it's a completely different machine that looks the same. You don't need to be the sort of electro-sceptic who sprinkles petrol on cornflakes to struggle to see the point of making such a radical and expensive change against the far-future prospect of an outright ban on combustion classics. For anyone who has experienced the charisma of the flat-six original, a near-silent and vibration-free 964 will always lack soul, even if it doesn't drop oil on your driveway or incur ULEV charges.

And for the £350,000-ish combined cost of Everrati's conversion and a solid original car is more than enough to land both a gorgeous original RS Lightweight and a well-stocked Taycan Turbo S. Which is the strange thing about expensive EV conversions like this, cars that are designed around the most rational, planet-saving criteria but which end up being bought for emotional reasons by those wanting to signal their virtue to the world.