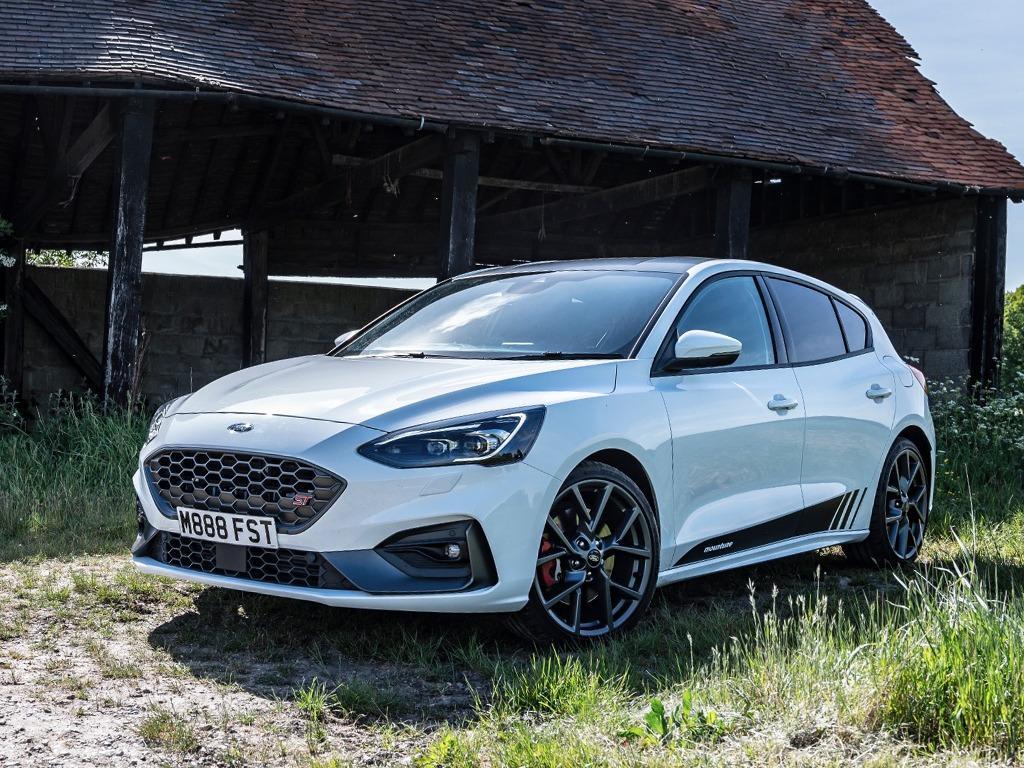 We’re well aware just how good the chassis of the latest Ford Focus ST is: the five-door hatchback beat the Megane Trophy, Golf GTI TCR and i30N Performance in our group test last year. On a sodden Welsh hillside, its best traits - a clever front diff and impressive body control - came to the fore, and trumped the power advantage claimed by its direct rivals. A fair result on the day, but the obvious thought did linger: to what extent had the rain concealed the shortcomings of the Ford’s 2.3-litre turbocharged engine?

Well, now there’s a £600 way of seeing off any apprehension. Mountune’s m330 upgrade comprises a higher spec air filter and the tuner's own smartflash ECU technology, lifting the EcoBoost unit to peaks of 330hp and 380lb ft of torque. Gains of 50hp and 70lb ft not only place the ST head and shoulders above its rivals, but also elevate the latter beyond the Focus RS by 56lb ft. The m330 Focus claims 0-62mph in 5.2 seconds – although don't assume that tells the full story of one driven axle versus two.

The impact of the ST’s newfound performance, given that it is accompanied by totally standard running gear in our test car’s case, is significant. But you wouldn’t necessarily know about it from the outside. Tailgate badge, Mountune decals and yellow gear knob aside, there’s nothing to shout about a visit to Mountune’s Brentwood workshop. Nor is there anything untoward in the car’s basic function: the ST’s standard drive modes – Slippery, Normal, Sport and (with the optional Performance Pack) Race – plus Sync 3 infotainment are all present and correct. Even the exhaust note on start-up is unchanged because the pipework remains standard.

As is almost always the case, Mountune’s efforts are all centred on the fun stuff. Familiar Ford features, like lifted-clutch throttling where engine revs subtly spike as you raise the left pedal, and quick, positive weight steering, all endure. Trundling around town is certainly no different, the ST not in any great need of the extra torque now available to it. Miles per gallon are seemingly unaffected; the car returned high 20s in town and 40 on the motorway. Predictably, it’s only when you begin to work the four-pot motor that the m330 benefits begin to show.

The engine’s characteristic intake rumble seems deeper and more prominent, and the rate at which the pace builds is noticeably greater with 380lb ft arriving at 3,000rpm. Off the line, Mountune’s re-tuned launch control (which holds revs smack bang on the entry-point of that peak twist) makes the claimed 0-62mph time believable - or it does on warm tarmac at least. Under heavy load there are more tugs at the steering wheel now, but not so much that it dramatically affects the car’s line or alters engine revs. Importantly, the ST’s ability to haul you out of bends seems unchanged, and by the time you’re in third, the upshot of its extra power is readily apparent. The idea of any previous deficiency is safely put to bed; so much so that the m330 feels like it would leave the vast majority of its rivals for dead.

Mountune’s test car gets Ford’s optional Performance Pack, a tick-box addition that anyone interested in forking out six hundred quid for an engine upgrade is likely to have already chosen. Certainly it’s a worthwhile enhancement, as it delivers firmer damping in Sport and Race modes (although you still can’t alter the chassis settings separately from the engine), something we’d argue is essential to highlighting the wider benefits of Mountune’s handiwork. Not because the standard setup’s softer settings couldn’t handle the power, but because with the dampers firmed up, a properly tacked-down front axle can become brilliantly entertaining. Attack a set of consecutive bends on throttle and the m330 dances through them imperiously.

Equally, with a lifted throttle or trailed brake the Focus ST will allow for some pretty significant corner entry angles. It’s rare for a hatchback’s back end to feel so keen to maintain the rotation, but the ST doesn’t let its 2.7-metre wheelbase limit its playfulness. Its composure isn’t restricted to the Sport and Race modes, but the chassis unquestionably feels more agile in its more aggressive states. Given that you can’t access the fruiter engine or exhaust settings in Normal, that's probably a good thing. Worth mentioning, too, that in Sport, Mountune has retuned the engine map so the exhaust will crackle and pop on a lifted throttle, which is silly - but also good.

Evidently, no work was needed on the standard ST’s six-speed gearbox, so you get the same positive shift action - possibly made a little more positive by the addition of the Mountune gear knob, as it deletes the cushioning effect of the standard leather affair. At the very least, being yellow, it adds a flash of colour to an otherwise plain Ford cabin, one which retains its nicely bolstered seats and plenty of legroom front and rear. It’s hard to fault Ford’s machine for all-round functionality either. If there’s one complaint, it’s that the ST’s brakes did start to show the strain of all that extra power. A squidgy pedal was never followed by a reduction in stopping power, but it’s enough to suggest that those wanting to make the most of Mountune’s upgrades ought to consider upgrading the pads at the same time.

That highlight (or lowlight) notwithstanding, it’s the standard condition of Mountune’s demo m330 which makes its upgrade so compelling. For less than two per cent of the £32k asking price, you can take the Focus ST from first-rate to fantastic. The additional power doesn’t spoil Ford’s judicious development work, it augments it in all the right ways - so much so that with the demise of the Focus RS, it’s hard not to imagine the manufacturer producing its own enhanced version of the standard model. Of course, that would arrive with a substantial premium; the m330 outlay is trifling, and absolutely no impediment to the ST’s status as a practical, well-appointed family hot hatch. A no-brainer? Yep, times a million.