Ecoboost schmecoboost; if you want the view on the proper V8 Mustang here's our first taste

So while the new

that we reviewed the other day is grabbing the headlines, it's the V8 powered GT that gives a far more traditional Mustang experience. 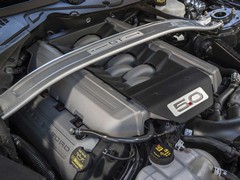 That's what you want under a Mustang's bonnet

Actually, strike that. It gives two thirds of a traditional Mustang experience - delivering on both performance and soundtrack, but failing conspicuously when it comes to the sort of mechanical crudity that's always defined the breed.

This takes some getting used to. I drove a US-spec car in the States, but found a road that put on a fairly convincing impression of the kind of British B-road that would usually make a mockery of a big Yank tank. Approaching a big bump at a decent lick I found myself instinctively tensing in anticipation of the sort of crash and shudder a last-gen Mustang would make if asked to digest a heave it at this sort of speed. It didn't happen; I'd be lying if I said the GT turned into a 70s Citroen and I didn't feel a thing, but the springs took several inches of travel without complaint and the dampers handled the rebound fuss-free. 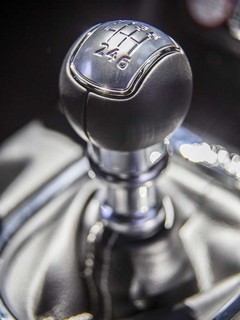 And that's what you want to be controlling it with

Nothing you wouldn't expect any self-respecting sports car to pull off, but still a revelation in a standard Mustang.

So what about the engine?
It's not that long since Ford made nearly as many V8s as it did cars in the States. Now the eight-cylinder is an endangered species, and the Mustang GT and its brawnier sisters are the only remaining passenger car application for the 'Coyote' V8. So we probably shouldn't be surprised that, apart from some minor top-end tinkering, it's carried over effectively unchanged from the last Mustang.

This is no bad thing. The V8 can't match the turbocharged torque of the Ecoboost low down, but it's got a broad mid-range and revs far more keenly than the four. Peak power is delivered at 6,500rpm, but it carries on pulling beyond that and to the 7,000rpm redline. By contrast, the Ecoboost has had a Horlicks and gone for an early night by 5,500rpm. The V8's soundtrack is relatively muted at lower engine speeds but it gets nice and snarly when worked hard. Which, as this seems to make it happy, you do a lot. 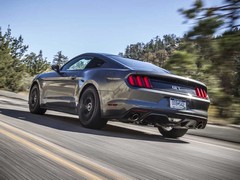 It helped that our GT came with the standard Tremec six-speed manual, which doesn't have the sharpest shift action but is vastly better than the slushy autobox of the Ecoboost we drove. It also had the optional GT Performance package, bringing a shorter final drive ratio as well as uprated brakes, but the ratios still felt well spaced for both blasting and cruising. The electric power steering feels impressively non-electrical, although the 'sport' mode adds nothing but weight. Still, the limits are flagged up accurately enough.

Smoking oversteer, right?
Well the extra grunt of the V8 certainly gives the GT a far more rear-biased handling balance than the Ecoboost, but you still need to be trying hard to get the rear end - and its fancy new independent suspension - to relinquish grip. In large part this is because the chassis manages to find far more raw adhesion than Mustangs of old. But it also feels like Ford's liability lawyers have had their say. Attack a faster corner and - without kamikaze tactics - the front end always gives up first. And in slower bends you need the combination of stability off and big throttle inputs to get it sliding, although it's tidy and easily gathered when it does. This is fair enough when you consider the GT is just the slightly faster mainstream version. More powerful sideways-everywhere models are certain to follow. 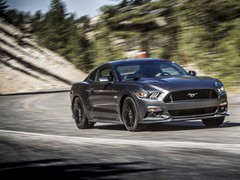 One of the side effects of the improved suspension is that you start to notice other things about the Mustang. Like how much it weighs. Low US pricing has prevented it from getting much in the way of lightweight tech - bonnet and front wings are aluminium, but the rest of the body is steel. This is as Ford launches an aluminium-bodied pickup truck in the States. And with the extra weight of the new rear suspension and more safety kit the new GT is actually 39kg heavier than the last one - a porky 1,682kg on US figures. That hasn't blunted acceleration noticeably - US magazines report mid-fours 0-60mph times - but the combination of accurate steering and a compliant chassis means you're very aware of the mass on a twisty road. The Mustang is definitely a car for that hoary old slow-in-fast-out technique.

And the numbers...
Our source within Ford UK suggests the V8 will cost under £35,000 when it reaches the UK next year. That's cheap enough to allow a credible amount of space beneath the premium-badged alternatives. The known unknown is what the CO2 rating will be when put through the official European test - nobody is going to be too surprised if it's big enough to scare off all but the most determined UK company users and those unlucky Europeans who pay vast rates of tax on emissions, horsepower or both.

One interesting nugget from the States, though - when driven reasonably hard on real roads the GT seems to be slightly more economical than the Ecoboost.