We like the formula but does it get lost in translation to UK roads? 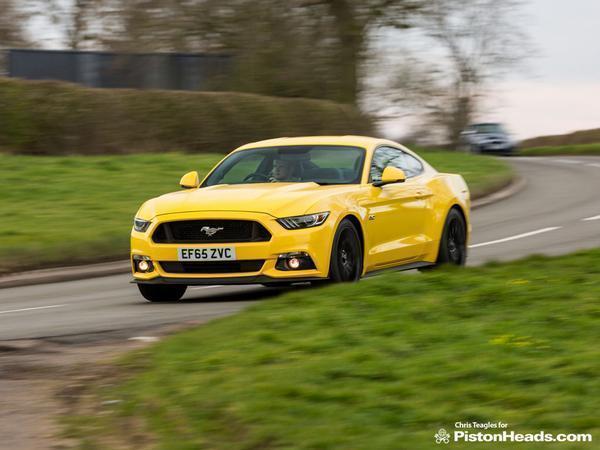 From this side of the pond I've long admired the Ford Mustang and all it stands for. But I'd never actually driven one. A position many now included in the target audience for this

Anglicised interpretations of US culture are everywhere of course. Some survive the trip across the Atlantic. Some just look horrendously out of place. So does the Mustang work in the UK? Or is it the motoring equivalent of going down the pub in a Stetson, bootlace tie and cowboy boots?

The evening before my drive I browse what else the £36,375 on-the-road price of this bright yellow 5.0 GT Fastback would get me. It's an odd price point in some ways, taking in the very hottest of hot hatches or the entry level into some more grown-up and prestigious sports cars and coupes, all offering very different characters and driving experiences. To keep things relatively simple I slim my selection down to similarly sized coupes, which basically means the Audi A5, Mercedes C-Class Coupe or BMW 4 Series. Safe to say among these cars 5.0-litre V8s are conspicuous by their absence at this price point.

Which of course is the cue for those bothered by such things to chime in with stuff about squishiness of interior plastics and what the neighbours will think. As if it's somehow more socially acceptable to wake them up with the clatter of a four-cylinder diesel than a big V8. 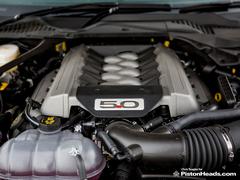 No replacement for displacement...

Those raised on aspirational dreams of slush moulded dashboards and damped switchgear will find the plastics of the Mustang's interior, the chromed toggle switches confirming their prejudices. Would an In-N-Out burger taste better purely for being served on bone china rather than a little cardboard tray though? Course not. And those of us who like what the Mustang stands for won't mind.

Every drive in a Mustang should - and will - feel like a bit of an event. In truth the stock exhausts do a disappointingly effective job of muffling the V8's start-up and idle. But there will no doubt be plenty of aftermarket options to deal with that. Quiet or not the tremble at tickover through the stubby manual shifter and view over the double-cowled dash is all you need to get in the mood, the first impressions that the Mustang is here to save us from over-complicated fast car mediocrity reinforced before you even release the clutch.

Under way it's interesting how the Mustang both confirms and simultaneously dashes all the stereotypes you might have had about American muscle cars. The wheel might be on the right side but the pillbox visibility, the interior ambience, the physicality of the driving experience - even the smell - will be familiar to anyone with experience of American cars. 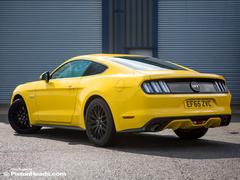 Ride is quite bobbly, keeping you aware

Initially the steering feels a bit indistinct, the variable modes simply offering up varying viscosities of mush. The engine feels a little tight, the gearshift and clutch long-winded and crude and the low-speed ride on the brittle side. It also feels a bit broad in the beam for cut and thrust driving on British roads. Little to trouble the smugness levels of your average premium hot hatch driver, in other words.

The bobbliness of the ride never entirely disappears, meaning you're more aware of road surfaces and bumps than you might expect. We don't have long enough in the car for it to be intrusive but I reckon the novelty could wear off over a long drive. The spring and damper rates are well matched though and as the pace increases you realise there's more sophistication and body control in the chassis than you might have expected. Clang! In my head there's a fairground shooting gallery of stereotypes being shot down. And that's the first bullseye scored.

Those raised on more recent European turbo engines - petrol or diesel - may be surprised at how hard you have to rev an engine of this size and on-paper potency to make meaningful progress. Note you'll need around double the rpm of your typical modern turbo to find that 390lb ft peak torque figure, for instance. That 1,720kg kerbweight doesn't help matters either and - shock horror - you might have to drop a gear or two in order to get into the real meat of the mid-range. 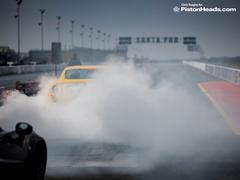 Does that matter though? A louder exhaust would let you live out those Bullitt fantasies of extravagantly double-declutched downshifts but even with the stock exhausts there's enough V8ness to enjoy the odd shift just for the sake of going through the motions. And as the rear squats and the bonnet rises like a speedboat rising onto the plane there's much more of an experience than you'd get from a point and squirt turbo.

Yes, that word again. Driving the Mustang is an experience. Not perfect. Not razor sharp. Probably not actually as fast as you think it should be. But something to enjoy purely for the hell of it.

I peel off the busy A-roads off the official launch route and onto some Oxfordshire B-roads, curious as to how the Mustang will handle this most British of driving terrain. Visibilty and size are, again, not on its side. But it counters with making slower progress actually more involving and interesting. Again, more noise would be nice to complete the picture. Spotting the recurring theme yet? 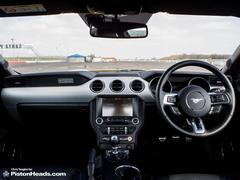 The lack of steering feel means there's not much in the way of pinpoint accuracy but the body control doesn't come apart at the seams and a confident use of the throttle - and use of the more relaxed stability control settings - introduces a sense of the rear-driven balance. Powersliding out of every corner remains the stuff of fantasy (probably for the best) but the predictability and eagerness with which the mechanical diff locks up on roundabouts offers all the information you need about what lurks beyond inherently strong mechanical grip. Where conditions allow there is clearly plenty of fun to be had, the limits being very well telegraphed and easy to nudge against when mood takes you.

It's all very honest and transparent, the sense there's nothing hidden behind an electronic smokescreen rather refreshing. It's an easy car to like and much to enjoy about its apparent rejection of modern performance car trends.

Out of a sense of duty I also drive the four-cylinder Ecoboost version. It doesn't actually feel that much slower and it's by no means a bad car. But compared with the V8 it feels mere imitation rather than convincing reimagination.

Whatever the engine the image thing will remain a big factor for many. Slavish impressions of Americana from the Rolling Stones up are an occasionally embarrassing English fixation. And to some a Mustang on a British high street or B-road is as absurd as Mick Jagger getting a knighthood for a lifetime pretending he's born of the Deep South, not merely south of the river.

So long as you don't drive it wearing a stars'n'stripes bandana the Mustang just about carries off its new job of translating muscle car culture for a global stage. The image is unashamed and as true to the heritage as you could wish for. But the engineering beneath it convincingly executed and a refreshing enough change from the alternatives at this price point to really stand out.

In this instance bang for buck is one Americanism we can enjoy without need of excuses.