Both have 2.0-litres, four cylinders and 300hp - but which is the best sports car? (Now with vid)

Between the various stories concerning the four-cylinder F-Type and 718 Cayman, more than 620 comments have been posted on PistonHeads. For reasons emotional, financial and ideological, it seems these are sports cars people can't help but talk about. So if an opportunity arose to pitch the two together, the pair that have so much to prove with four cylinders, having charmed plenty with six (or more), you'd do everything to make it happen, wouldn't you? 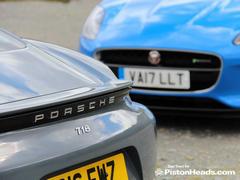 The original launch for the F-Type 2.0 wasn't brilliant, in all honesty. Hence a UK launch soon after, based around the magnificent roads of North Wales. It remains the perfect place to compare two sports cars; with the attendance of one guaranteed, it simply required getting the other contender along and gatecrashing the launch...

Leaving Goodwood far closer to 5pm than planned - long story - the Porsche 718 Cayman feels like a very good place to be. Somewhere far later than 10pm in Llanymynech, it still feels like a very good place to be. There are more details to discuss in due course but it feels rapid (with a fantastic manual gearbox), delightfully agile (when any cornering opportunities emerge) and really rather civilised, though how a car in excess of £50,000 in 2017 can come without DAB remains a mystery. Why you would equip one of these 718 Porsches with a sports exhaust baffles as well, but that's a point to return to.

Kerb appeal
Despite a lack of phone signal on the day, our plan to get the cars together in Llangynog works. And while the focus is on the driving, it's interesting to stand and compare the two stationary for a couple of minutes. Arguably if you're not buying these two for superstar engines anymore, they have to impress elsewhere with their sports car sense of occasion. The Cayman is compact and pretty, the shape familiar but very nicely executed. Is it an improvement on the pre-718 cars though? 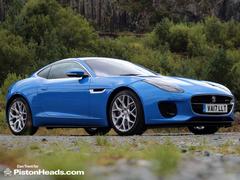 The F-Type is no less common, yet the drama hasn't evaporated. In Ultra Blue with Siena Tan leather it oozes class, sporty and stylish and everything we've come to expect from the hardtop F-Type. Indeed one passer-by is surprised to find it's 'only' £50K, his initial guess somewhere near £200,000; he shows no interest in the Porsche.

The good news continues inside the Jaguar - it has DAB! Dan has it set to Radio 6 though. Shame. Still, no mind, because the B4391 leads out of Llanmynech and Dan is wasting no time in getting reacquainted with the Porsche. You know what though? The Jag is with it. You have to be mindful of its size - this remains an F-Type, regardless of the engine - but there's a resolve, precision and assuredness to the dynamics of this car unknown to its stablemates. While the lairiness of F-Types can be deeply endearing, they've never felt like sports cars to truly attack a B-road in. The 2.0-litre is different, the front end grippy and eager to turn in and the rear faithfully following.

As for the engine, let's not beat about the bush: this Ingenium turbo won't be remembered as one of the world's greatest four-cylinders - it's hard to think of any of the current crop that will. What it is however, when combined with the standard eight-speed auto, is interactive and engaging. On a B-road you're using meaningful amounts of third, fourth and fifth, the exhaust parps are entertaining and the shifts quick. Perhaps it's a cynical move to help acceleration, but it does help the car feel more alive. Proof of that? The Cayman is pulling 80mph at the top of second; third in the F-Type is done by a little over 70... 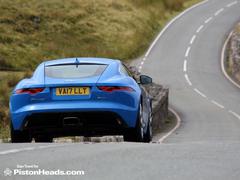 This one drives very nicely too!

By the time we change (the Porsche needs fuel), the Jaguar has made a very favourable impression. F-Types tend to, though that's usually because they've made some rude noises, gone very fast and made you look fairly heroic with that dab of oppo. This Jag is different because it's impressed with how well it's dealt with a B-road, and how much fun the driver has had - despite not one degree of corrective lock, honest.

Crikey this Porsche is good though; it takes all of three corners on a decent road to prove that. Lost in the furore over the engine change is the fact that this is still a Cayman, a car that's been raved about for 12 years and two generations now, and which could probably still be tremendous fun with an actual Beetle engine in it.

How can more sports cars not be like this? It's low and lithe, scything through bends where the Jag may have taken a split second to settle itself. On the optional PASM dampers the Cayman rides more fluidly yet shows greater control than the Jaguar despite its bigger wheels. Its electric steering is a fraction more natural in its response than the Jaguar's, adding to the confidence you have in its abilities. There's so much about this 718 Cayman that makes it such a great sports car. 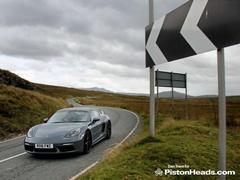 As nicely as the little grey Porsche though? Hmm...

Or rather, such a great sports car with ear plugs in. I've been a firm advocate of the flat-four turbos actually, primarily for their incredible throttle response and energy at high revs, but there can be no escaping the fact that the noise simply isn't very nice. The problem is exacerbated here by the sports exhaust, too. And while the Jaguar 2.0-litre isn't exactly a Honda K20 for acoustics, its sound is more pleasant.

Turbo time
Trouble is the turbo has made the Cayman a better car to drive. Seriously. It's probably not desirable to say so, but the old 2.7-litre Cayman was not an amazing sports car - even Chris Harris admitted as much. It didn't have the muscle to either pull its gear ratios convincingly or make the most of its marvellous chassis. Now, however, the turbo torque really lets you exploit the chassis' talents; moreover, without the need to chase every last rev for performance, you can change up at middling revs - using that fabulous gearbox more - and not feel like you've missed out on as much as you did previously.

You can see how this became a really interesting comparison. Switching from one to the other revealed the various strengths and weaknesses of both cars, and probably would have continued to do so for longer. On the B4391 the other side of Bala, towards Ffestiniog, the cars really get to show off. 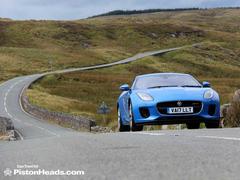 In the Jaguar you're braking later, turning harder and back on the throttle sooner than in any other F-Type, safe in the knowledge that it can contain itself. Of course, the cynical riposte is that the power isn't there to challenge the chassis (or indeed just the chunky rubber), but the newfound accuracy and precision of the 2.0-litre proffers its own satisfaction. Concerns raised while yobbing about on the launch about a missing LSD don't reappear in Wales, the Torque Vectoring by Braking does a very good job of keeping the car on line and maximising traction. And making the rear brakes pong...

The Porsche? Sublime. It just is. The balance was always there but now the turbo engine gives you options in the corners and more punch down the straights. It's light on its feet, focused without being frantic and, to be honest, all the better for having a manual gearbox here.

Price is right
So how to conclude? The fact remains that, good though the Jaguar is, the Porsche is still the more satisfying, more accomplished sports car. On the other hand, it should be noted this is the closest an F-Type has been to any comparable Porsche from a purely driving perspective, be that a V6 against a Cayman, a V8 against a 911 Carrera or an SVR against a Turbo. That's a considerable achievement. 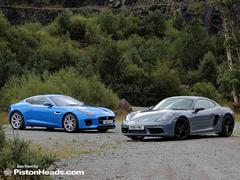 Both great fun, but one is £10K less than the other

Looking at the bigger picture though, which is the car you would want to own? While perhaps a perverse way of looking at things, the Porsche always had more to lose in the engine switch because it was so good before. That the Jaguar has gained so much dynamically compared to a V6 makes the lack of an exciting noise more acceptable; while in the Porsche the turbo has made it more fun, but it's arguably not enough to overlook the noise it makes. Put it this way: in the 718 you're left thinking about the possibility of six cylinders, and how it might improve things, whereas you're left more contented as a driver in the Jaguar. As a product, the F-Type seems to feel more comfortable with four cylinders. But the Porsche is nicer to drive...

The debate could go on for ages, to be frank, but in the comparison there's one deciding factor: price. As tested the F-Type is £63,815, the £10,000 jump from the £53,600 list accounted for largely by the extended leather (£3,050), the seat memory pack (£1,100), 'Climate Pack 2' (£1,380) and the £1,085 Drive Pack. Lots that could be done without, basically, but the Cayman you see here is £53,605. On the day, there's absolutely no way the Jaguar felt £10,000 better. It's sad to boil down the best sorted F-Type yet to a numbers game, but that's how it has to be. You could add PDK to the Porsche for parity with the Jaguar, but taking the sports exhaust off the 718 would mean that automatic only adds £1,100. With the cars at a similar price point, the Jaguar would make a very convincing, deeply appealing, case for itself - with the proviso that they're £7K apart before any extras are added. On this test, however, victory has to go to that devilishly good Porsche.

Watch the rev off