Hands up, we're a little late to driving the

in Britain. The launch proved it most certainly met the lofty expectations levelled at it, but how would it fare in a wet and cold December rather than a balmy April?

To find out, the Jaguar needed a rival that hadn't been encountered previously. A tough challenge given that it has faced everything from a Boxster to an R8 in its various forms elsewhere. We've avoided the obvious Porsche rivals for now (F-Type Coupe vs. Cayman S is surely one to look forward to in 2014 though) and instead got an AMG.

Despite fairly reserved appearances for an Affalterbach product, the SLK55 comes into this battle packing a punch. It's 80hp and 66lb ft up on the Jaguar, enough to offset its weight disadvantage. Our first drive back in 2011 concluded that it was 'a very well-rounded product'. Again though, that was overseas in blazing sunshine; we all know how some favourable weather and a dropped roof can favourably enhance impressions.

As with every F-Type comparison, the opponents call into question the Jaguar's price. Can its supercharged V6 really compete with a bonafide AMG V8 available for the same money? The Merc of course comes with a folding hard top and the Jag makes do with a canvas roof; how big a difference will that make? What is the best of these two is the best way to spend £60K? Read on... 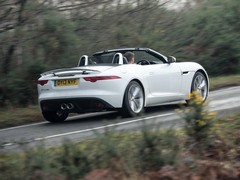 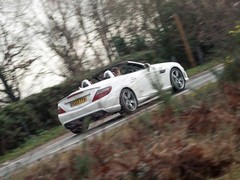 All prices before options