Is this the Speciale-chasing Huracan we've been waiting for? 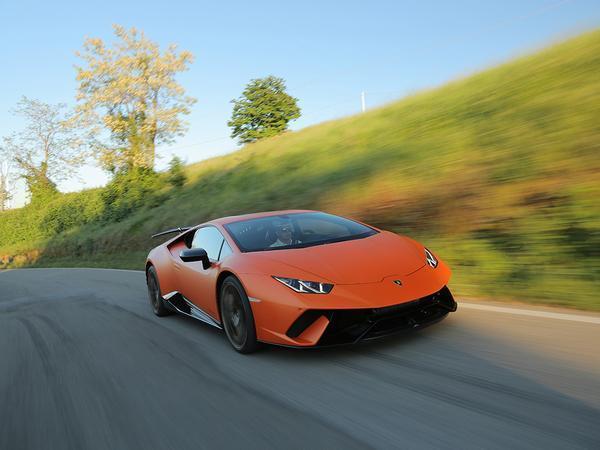 Got to love a Lamborghini launch slogan. For the Aventador S the invitation was to 'Dare Your Ego'. Now it's time to 'Break Like The Wind' for

. OK, it's not really. But Spinal Tap fart gags sound more amusing than the official 'Sculpted By The Wind'.

I really should grow up, shouldn't I?

Where's the fun in that though? Lamborghinis should inspire the inner child. They are cars of spectacle and fun, to be enjoyed if not taken too seriously.

But with the Huracan Performante, Lamborghini IS getting serious. Really serious. Lap times. Active aero. Less weight. More focus. This is about Lamborghini being more than just an attention-seeking showboater. It wants to prove itself as capable of building cars that can provoke on more than looks alone. 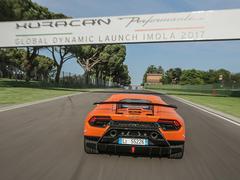 This far and I've not mentioned

. Why should I? The launch takes place at Imola, just down the road from the Lamborghini factory. Or, to give the track its full title, the Autodromo Internazionale Enzo e Dino Ferrari. Deliberately provocative move by local boy, former Maranello man and now Lamborghini boss Stefano Domenicali? Or more because it's convenient and a proper big boys' circuit with a fearsome reputation? Probably a bit of both.

It's certainly a good place to test out the Performante's signature technology, namely the Aerodinamica Lamborghini Attiva, or ALA for short. This and the option Pirelli Trofeo tyres play a bigger part in those lap time claims than the 40kg weight saving or 30hp power gain.

Basically, when ALA is off you get maximum downforce front and rear - an astonishing 750 per cent more at the back from that fixed rear wing by Lamborghini's calculator. Good for corners, obviously. But when you get on the gas out of them ALA is activated, opening flaps in the front valance to reduce drag under the car and bleeding air through ducts on the rear deck, through the wing struts and along the edge of the wing to the same end.

Here's where it gets really clever though. Through a process Lamborghini is calling 'aero vectoring' the downforce can be varied across the rear of the car. R&D boss Maurizio Reggiani likens it to weighting your outside ski to carve the turns, this ability to direct downforce where and when it's needed key to maintaining the Trofeos' bite on the track. Controlled by the gyros and accelerometers of the LPI (Lamborghini Piattaforma Inerziale to go full Italian...) it works in coordination with the magnetorheological dampers, LDS dynamic steering (both optional), all-wheel drive and stability control, ALA able to switch between on and off in just 0.2 seconds with the design of the wing struts meaning it's always 'charged' with air and ready. 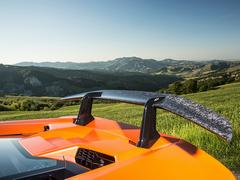 All very serious. But Lamborghini knows its customers. And if you're going to sell a souped-up version with loud exhausts and fancy aero, pride dictates few are going to want it folding away into the bodywork, McLaren style. Given that choice, most would deploy it anyway, whether going flat through Flugplatz or pottering about Knightsbridge. This just gives some technical validation to the more childish appeal of a lairy Huracan with a fixed carbon wing on the back.

I could go on and on about that Forged Composite (mouldable, chopped carbon fibre in effect) that is both a visual signature for the aero parts and contributes to the modest weight savings. Turns out it's not as heavy as the marble it superficially resembles, which is a relief. There's further geekery too, like the titanium valves and bronze intake plenums referencing previous special edition Lamborghinis like the Diablo 30th Anniversary. But we want to see how it goes, don't we?

Thus far the Huracan driving experience can be easily summed up as looks fabulous, makes a great noise but plays things dynamically very safe. Too safe, many taking the dogged understeer, excessive electronic intervention and emphasis on all-wheel drive traction among the less welcome Audi influences.

Due respect
Following an instructor in a regular LP610-4 onto the Imola circuit, my desire to salute Senna as we peel into Tamburello is distracted by the speed with which the Performante darts into the left-right chicane that replaced the notorious left-hander, as-was. In a regular Huracan you'd be fighting the flaccid and inconsistent feel of that LDS dynamic steering, the sensation it wants to push-on the prevailing Huracan dynamic trait.

Our cars have been pre-set into Corsa mode before we even leave the pit lane, significantly narrowing the LDS operating range. Reggiani won't talk numbers but hints that it's less than the 13:1 Audi freezes the system to on the R8 in its most extreme setting, the way aero vectoring effectively drags the inside rear by putting additional aero load on it aiding turn-in and reducing steering angle further.

So much for the theory. In practice, the Performante feels alert and agile in a way no Lamborghini ever has before. The aggression in the turn-in is more than a match for the looks, even if it still feels a little synthetic and with little true feel or feedback through the wheel. 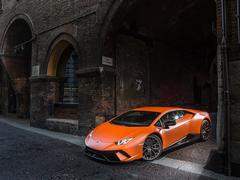 Response to throttle inputs has never been an issue in the Huracan though. Ferrari may boast of all its clever lag-minimising tech on the 488 GTB and McLaren's characteristic whoosh-bang turbocharged power delivery is entertaining. But the instantaneous response of that 5.2-litre V10, the exhaust noise, the sniffs of fuel going into those bronze intake manifolds, the gnashing valve gear and the way it screams to over 8,000 is a defining Lamborghini feature in this turbo age. Those superbike style exhausts look cool and save 10kg alone but they also help breathing and torque delivery, 70 per cent of the peak 442lb ft available from just 1,000rpm.

What you don't get is that sensation of being able to dance on the throttle as you might in a Speciale or that exciting sense of a 675LT's Brake Steer system attempting to contain massive turbocharged thrust through the rear wheels only. The Performante remains a 'get your foot in and ride it out' kind of car, leaning heavily on its all-wheel drive traction and only offering the slightest sense of rear-balanced rotation in Corsa mode. Enough to have you fractionally winding the lock off if you've been assertive enough on the throttle. But it's more effective than it is inspirational, in keeping with that new-found intent for chasing lap times.

Would it have been quicker, and more entertaining if they'd based the Performante on the rear-wheel drive Huracan instead though? Reggiani says they crunched the numbers and the loss of traction out of the corners would have cost more than the modest 30kg weight saving might have gained. Begging the question, has fixation with nailing a 'ring lap come at the cost of making the Performante a truly hardcore hero car? 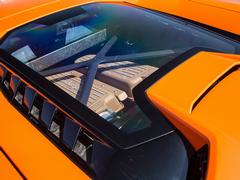 Possibly, though it's not lacking in excitement. The thrill in the Performante is its encouragement to drive it absolutely flat out. Everywhere. Keep it pinned, keep it pinned, keep it pinned. The aero-enhanced smoothness with which it smothers direction changes, rides kerbs and deploys its power is in dramatic contrast with the aural mayhem from behind your head, the glowing exhausts and the sheer speed. Indeed, before long it's evident the pro hands leading us round in the regular Huracans are having to work for their lunch, even with ham-fisted muppets like us behind them.

I can see my instructor's Huracan washing wide of the apex as the Performante remains nailed to it, I'm having to wait before getting on the throttle to give him time to gather things up and in the braking zones he's having to be way more cautious. To the point where I nearly run into the back of him into Variante Alta chicane, such is my (over) confidence in the Performante's ability to hit the turn-in point. Later we hear that the instructors - already on Trofeos while we're on P Zeroes - are begging to be allowed to lead the groups in Performantes, such is the speed differential.

Is this Lamborghini's Speciale or LT moment? In the heat of the moment and on the track you'll hear me saying so in the videoblog shot on the day. After sleeping on it I'd argue it's as close as the brand has yet come, though the reliance on electronic support and all-wheel drive perhaps detracts from that final emotive connection. There's absolutely nothing wrong with the calibration and seamless way in which the systems interact, give you confidence to absolutely nail the throttle and push the car incredibly hard. But you never entirely escape the suspicion you're being flattered rather than challenged. Witness the difference between Marco Mapelli's Aventador SV lap and his one in the Performante. The latter is faster, the former ragged and properly heroic. Which is more 'Lamborghini' though?

When Ferrari's response comes - whatever it ends up being called - the emotive pull of the Performante's character and naturally-aspirated heart challenge Ferrari's sense of superiority more than ever. Here on a track bearing Enzo's name and under the stewardship of a former Ferrari F1 boss, Lamborghini is truly staking its claim on Maranello's sacred ground. Domenicali is entirely respectful of his former employers. But he knows the way they think. And when he grins and says "now they are watching us!" you know he's enjoying this new-found intent.