You can buy a Defender with a V8 again. Should you? 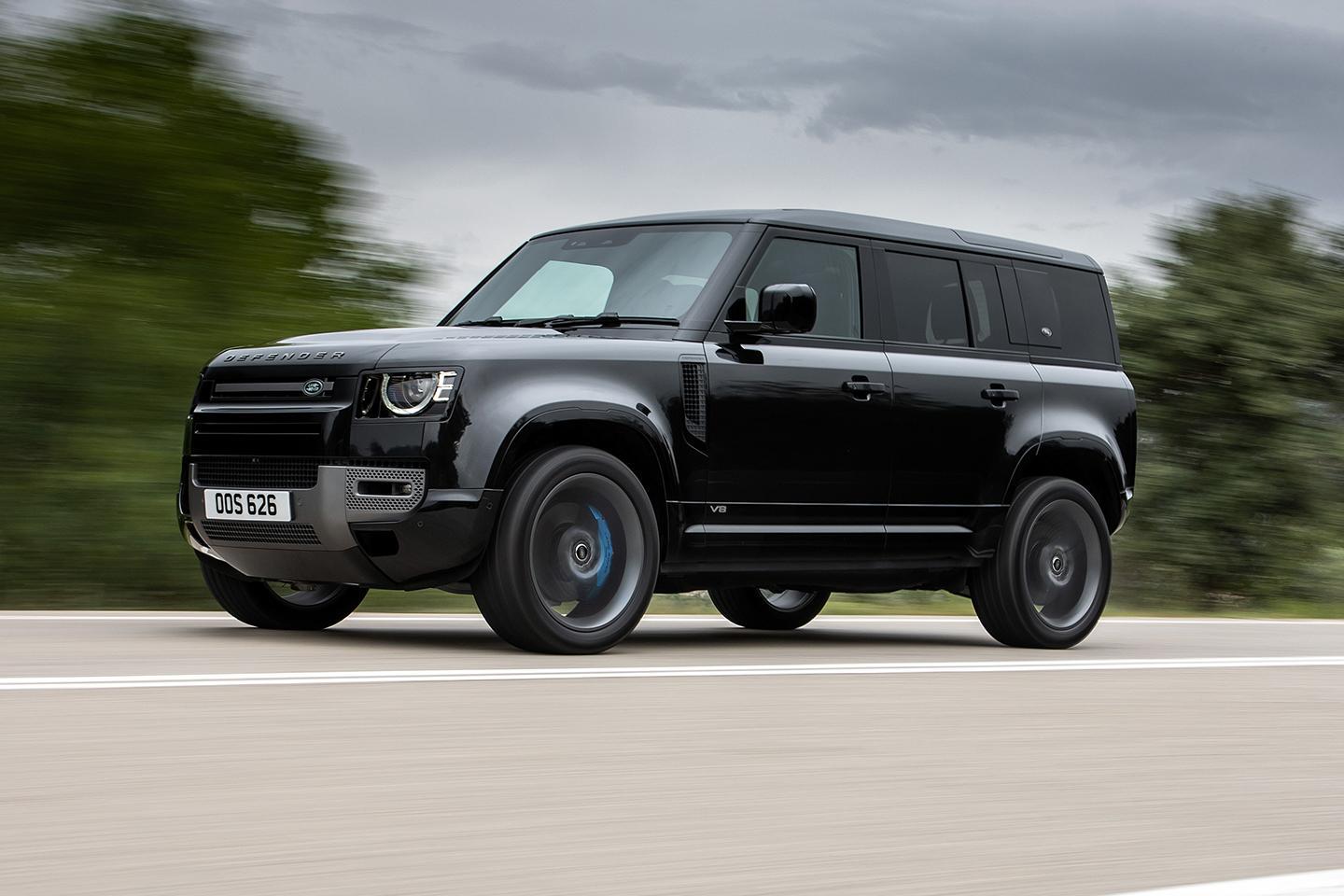 There was never any chance that JLR's ubiquitous V8 wouldn't find its way into the latest Defender. Not because the combination has a long, if not precisely illustrious history, but because the audience for SUVs with more than 500hp is currently helping underwrite the business activities of virtually all its major rivals. The quickest Defender might have a hint of 'last hurrah' (Land Rover's words) about it with the supercharged unit now on borrowed time - yet it would have been safe to bet the mortgage on its belated introduction.

Of course you'll need part of the winnings to buy your way into a Defender V8. The last time the manufacturer launched a Defender with a 5.0-litre engine, it was a strictly limited Classic Works product and we were told the asking price kicked off at £150,000, which was impossible to argue with because it turned out the firm had already shifted the lot. This time around the V8 version is available to a larger audience than the one Land Rover can get on the phone, yet it still starts at £98,575 for the 90 and £101,220 for the 110.

Intriguingly, that positions the larger version - the car we drove on road - right alongside the SVR version of the Range Rover Sport. For just £11k more, Land Rover's website says you can order the Defender's 525hp variant of V8 in the full-size Range Rover Autobiography. The first is significantly quicker than the Defender, the latter, significantly plusher. Which isn't to say that the car is improperly priced - most prestige-badged SUVs with comparable power outputs nudge six figures - just that you are rather spoilt for choice without troubling yourself to consider a model not made by Land Rover.

If this is a concern for the manufacturer, it is doing a bang up job of not showing it. For Land Rover, the V8 rounds out the nascent Defender line-up, and the customer already understands the manifest differences between its large-scale offerings. Indeed, one of the more interesting things about the supercharged version is not the lengths its maker went to distinguish it from any other Defender, but rather its insistence that it remain in many regards the same. The car's project lead told PH that the V8 started in a more extreme place, only to be gradually brought back into the established fold.

Certainly it doesn't look any different, flagship spec and badge aside. Or it wouldn't if Land Rover hadn't opted to fit 22-inch wheels as standard. The Defender is styled to absorb that much rim, although the idea that you can have a 20-inch alternative as a cost option with proper off-road tyres is not a completely unappealing one. The differences elsewhere are chiefly about calibration; the engineers have indulged themselves in many places - the steering, the springs and dampers, the eight-speed transmission - but only so far as to offer an alternative state of tune. Which means apart from slightly more rugged anti-roll bars, the hardware alterations are mostly limited to swapping out the Defender's appreciably worthy, upstanding engine options for JLR's familiar cad-about-town.

Obviously the supercharged unit fits under the car's bonnet without any issue (the Defender's super-tough architecture being derived from a Land Rover platform that was already designed to accommodate it), although it's worth noting that both air intakes are now active on the V8, and the exhaust system is uprated too. Typically this has been shorthand for 'amplified' - but not so in the Defender's case. The quad tailpipes do indeed feature active valves, although a good deal more time has been spent ensuring the engine meets ever more stringent noise regulations than how massive it can be made to sound in a tunnel.

As a result, the quickest Defender ever made turns over and mooches about in relatively subdued fashion. In 'Comfort' mode, the default setting, the Defender is all about simmering politeness and the V8's light-under-a-bushel presence. If you come to the car expecting SVR-grade fireworks, it might seem all seem a little too understated - although, like actual fireworks, the SVR's excess tends to become wearing over time. However, if you come to the V8 having just driven the forgettably docile PHEV version of the Defender, its smouldering attitude is just the thing.

Much as in other Land Rover installations, the engine is a 5.0-litre wand for what ails the prodigiously heavy Defender. The burliest diesel unit actually eclipses the 461lb ft of low-end torque on tap, but it cannot hope to reward its driver at step off like the V8 does. You either glide away from traffic lights on minuscule throttle openings or launch over the white line like a supercharged grizzly bear. Both are very satisfying, and probably worth the price of admission alone. At the very least, any lingering notion that JLR's largest engine genuinely might not suit the new Defender's remit is pretty much dispelled from this point onwards.

For the most part, it gets better, too. Land Rover's efforts to not dramatically upset the Defender's easygoing dynamic have paid dividends in what we euphemistically call everyday driving. The air suspension is perhaps a smidge more reactive than in standard guise, but honestly this just makes the car seem better connected to the road. And while it may also resist lateral body roll a tad more aggressively, there's still sufficient lean plumbed into proceedings to make a Porsche engineer blush. Which means you generally drive the flagship model much like you do any Defender. Which is to say cheerily and in great comfort. Except you've got a V8 - so it's better.

The problem, if you can call it that, is if you decide to take the car's exclusive new 'Dynamic' mode at face value and start throwing it around like an oversized GR Yaris, like you would an SVR. Sure enough, the adaptive chassis dutifully ups its game, and doubtless the algorithm which drives the much-trumpeted Yaw Controller pays more attention to how the power is being meted out through the active rear differential - but it doesn't take long to twig that a punchier, pushier Defender is not necessarily a more enjoyable one.

The reasons for this are plain enough. Where the Range Rover Sport SVR was modified to monster B roads with 575hp and summer tyres as an enabler, the even-heavier Defender 110 must make do with a taller ride height, slower steering, all-season rubber and 50hp less. So while its cornering speed and the confidence required to get you there are duly enhanced in the V8's most belligerent setting, there isn't necessarily a commensurate pay off in driver reward for indulging it. The SVR encourages you to drive like a buffoon. The Defender merely permits it.

Or it does on-road, anyway. Away from the confines of the public highway, the V8 is a hoot. Past experience has taught us much about the peerlessness of the Defender as an off-roader, and in an open field, somewhat predictably, the supercharged engine, livelier back axle and significantly more liberal stability control pay PepsiCo-sized dividends in the shorter 90. In point of fact, the V8's tweaked chassis is said to provide you with marginally less wheel articulation than a standard Defender when you're crawling. But you won't care about that with cut grass flicking through the window. Nor about the kerbweight or fuel consumption or much of anything else.

When you do finally come to a stop you might dwell for a moment on the potential superfluousness of the V8's additional capabilities with regard to your daily requirements - but that does rather swerve around the gratuitous nature of the model as a concept. As with all these things, no one really needs a 525hp Defender. It is an object of frivolous desire right down to its 22s; the manufacturer knows this, and so do we. Does it conjure joy? Abso-fruitly. Which means the new V8 is exactly good enough.