Took a while but we've finally had a drive in a Ghibli - worth the wait though? 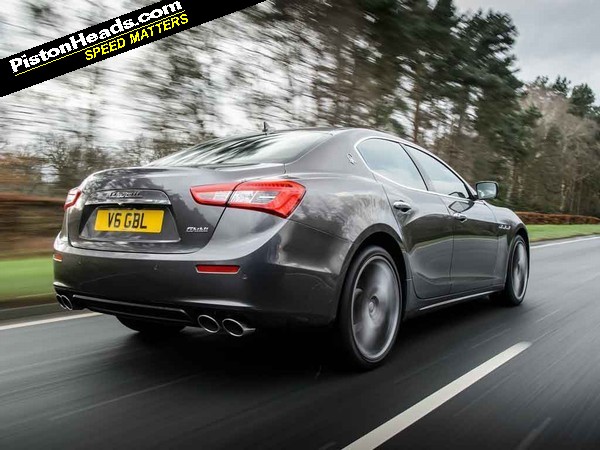 Take a Maserati saloon. It's smaller and lighter than a Quattroporte, rear-wheel drive with a mechanical limited-slip differential. It has more than 400hp from a turbocharged V6 and is fitted with ZF's brilliant eight-speed auto. The suspension is by double wishbones at the front and a five-link set-up at the rear and the styling...well, it makes everything else in the class look generic. It must be a matter of execution, then, that the Maserati Ghibli S is underwhelming, for in concept alone it has the makings of a great. 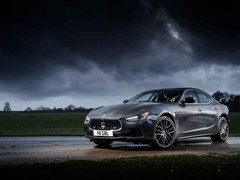 Still thinking of a 5 Series or Audi A6?

First, some background. The Italian marque celebrates its centenary in 2014 and as it turns 100 years old it's well on course to increase its market share by an order of magnitude. With 15,000 units delivered worldwide in 2013 and 171m euros earned in trading profits the company looks to be in good health, but with the arrival of the Ghibli saloon - its competitor in the 5 Series/A6/E-Class category - and, in 2015, the Levante SUV, Maserati is a brand with grand ambitions.

In the UK, which is expected to be its third largest market worldwide, Maserati is targeting a staggering 10-fold sales increase between 2012 and 2016, from 300 units to 3,000. The Ghibli and Levante will count for more than 90 per cent of that growth while an expanding dealer network will service the vast influx of new customers, private and fleet. 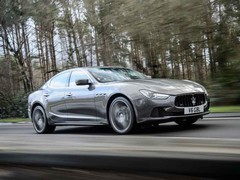 In a dark colour on optional 20-inch wheels the Ghibli S certainly has the aesthetic merit to match the illustrious trident badge. The front is aggressive and familiar to the rest of the range, although the rear is perhaps a little bland in comparison. In lighter colours, the three accent lines that converge just ahead of the rear wheel arch look rather fussy. The cabin, meanwhile, is attractive and distinctive in its architecture and the quality is good. With black and red leather covering the dash, it feels more like a sports coupe than a four-door saloon from within.

Immediately, then, the Ghibli S has stolen a march on its direct competitors for the badge, the styling and the cabin are all just that much more appealing, that little bit less derivative. For many of the 1,000 Ghibli customers that Maserati hopes to find in the UK this year, that'll be enough to seal the deal. A pity, though, that the outlook begins to look rather less sunny once on the move.

Trident too hard
Repeat after me, 'This is not an M5 rival'. So why, pray tell, does it ride like sports car? Around town it's fidgety, over larger surface imperfections it's crashy and there isn't the level of damping quality that you'd expect of a luxury saloon car. A button marked I.C.E. - which, confusingly, the Maserati folk refer to as Increased Comfort and Efficiency, while the dashboard display reads Increased Ctrl and Efficiency - knocks the firmness back a little, but only improves the quality of the ride by the very slightest degree. Tapping that button will become as much of part of the start up procedure as prodding the engine start. 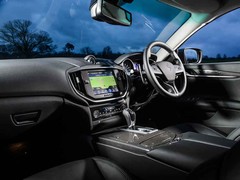 Much more exciting than Germans here too

The electric power steering is not one of the more successful systems out there. As Porsche and BMW prove that ePAS can still be pleasant and engaging, the Maserati system feels remote. There is, on occasion, a momentary delay between initial input around the dead ahead and first response from the rack, and there's an artificial weighting that seems to corrupt any sense of connectivity at road speeds. The steering wheel rim itself, meanwhile, is just too fat for comfort.

The poor steering is particularly disappointing because once the road opens up a little, and as a few quick laps of a test track highlighted, there is a keen and agile chassis beneath the bodywork. The masses of the car are kept under tight control, there is grip aplenty in even horrid conditions and it turns in with a darty front end and a neutral stance throughout the corner. It's all so effectively disguised by the sticky, lifeless steering, though, that the driver rarely feels any inclination to explore those qualities. 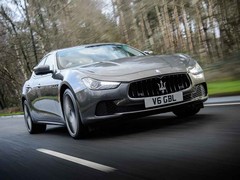 It's all there but something doesn't add up

The drivetrain fails to live up to its tech spec promise. There's no doubting the strength of the engine itself, or the minimal turbo delay, but there is so little responsiveness to throttle applications that you soon believe the sump is filled with treacle. We know this gearbox can be crushingly effective, but in this instance it feels more dim-witted than we've come to expect. Clearly tuned for comfort, it works much better simply as an auto at everyday speeds, and less well in its manual mode when you crave better responsiveness to your tweaks of the column-mounted paddles.

The 275hp diesel engine, also a turbocharged V6, is effortlessly strong and is just about pleasant enough under both hard and normal use to not sit completely at odds with the badge on the steering wheel.

The Maserati Ghibli's greatest strengths - the styling, the badge, the distinction from its German rivals - are all superficial, and for that reason it is, for now, a missed opportunity.