580hp from a Ferrari-built V8 and a soundtrack to match - is this the Levante we've been waiting for? 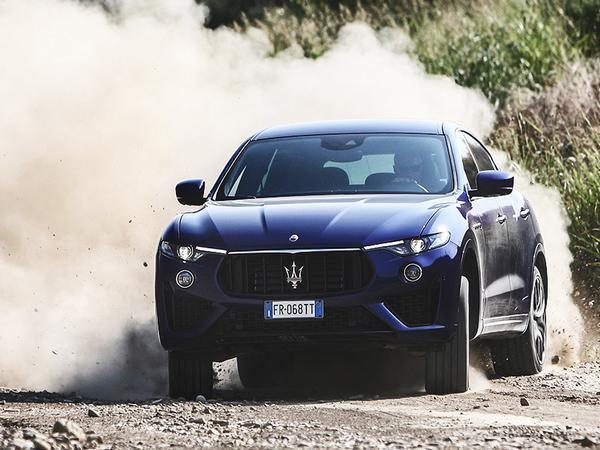 It turns out that we weren't the only ones disappointed by the first Maserati Levante's use of a V6 diesel engine. The engineers behind the model had, we now know, already produced a skunkworks V8 petrol version, such was their enthusiasm for the introduction of a high-performance halo. Thanks to market trends though and pie charts and executives in board rooms, at the car's launch in 2016 we were presented with a Levante that used a characterless oil burner. It really hampered the SUV's ability to make an impression in the segment, and while the V6 petrol that followed drastically improved the situation, the Levante has never really stood out from the crowd. Now, three years into the Levante's life, Maserati's engineers have finally got their way; the brand is introducing two V8-powered Levantes to the market. There's the 530hp GTS and the skunkworks dream come true, the 580hp Trofeo.

Forget what you've learned about the Levante up till now because the introduction of this engine creates something substantially different from before. The Maranello-made 3.9-litre motor is based on the one that powers the Quattroporte GTS, but it's got two new twin-scroll turbochargers, new cylinder heads and a different camshaft, as well as different pistons and connecting rods, so power in the Trofeo peaks at 580hp at 6,250rpm, while torque rises to 538lb ft between 2,500-5,000rpm. Those are very good numbers for the segment, yet it's the engine's voice that most assertively establishes the V8 Levante as something separate from the rest of the range.

It really has to, because the design changes to reflect its newfound potency are deliberately discreet. Maserati still has to appeal to its mature customer base, so the fitment of 22-inch wheels - the largest yet fitter to a Maser - sportier bumpers and quad-exit exhausts are considered suggestive enough. Responsibility falls to the V8 to illustrate the pace, and it certainly sounds appropriately glorious from inside and out. The quad pipes project its muscular, foreboding growl at low revs that builds into a powerful orchestra of tones, backed by induction whooshes, gargles and sharp cracks on upshifts. It all sounds real and genuine too, with no artificial speaker trickery of fake pops and bangs. If there were an award for exhaust note alone, the Trofeo would take the win in the SUV class with honours.

It's so exciting to hear, in fact, that you might even be able to forgive the car for its sub-par interior. The seats are lovely and the cross-stitched leather is soft to touch, but the fit and finish of the trim is no match for the Porsche Cayenne, nor is the tech on offer, which looks six or seven years behind the Stuttgart alternative and has none of the theatre offered by the a Range Rover's plethora of digital screens. The Levante's dash, with its 8.4-inch touchscreen and narrow instrument cluster display, feels only a slight step up from that of the Alfa Romeo Stelvio QF, which is almost half the price of the £125k Trofeo. It's a shame the space you sit in feels so far behind its rivals, but as soon as you start that Italian motor up, your attention is completely diverted.

In the Trofeo's normal mode the bass of the V8 is permanently audible in the background, though not a significant feature. Until you spin the crank past 4,500rpm, that is, when presumably the exhaust automatically switches into its loudest mode. Avoid that, and the highly refined Trofeo takes the manner of something more relaxed, flaunting its impressively low road noise - despite the 295-width tyres beneath the rear arches - and ride quality that shames SUVs with much smaller wheels. So good is it over the cracked and often crumbling surfaces of our Modena hillside test route that we might even suggest the Trofeo - which, let's not forget, is by far the most sporting model of the Levante line-up - is actually the best riding car in the range. Combined with the effortless progress provided by the engine and the fluidity of the ZF eight-speed torque converter, it's actually rather lovely to cruise about in.

Click through to Corsa mode and the damping rates tighten a tad (you can switch them back to normal without affecting the powertrain setting if you want), although not so much as to make the ride harsh or uncomfortable. It's probably a 10 per cent change that is only really noticeable when you turn up the pace, in this case around the hairpins and successive bends of an Italian route that Ferrari routinely uses for testing. The 2,170kg Trofeo is properly fast, the swiftness of each gearshift made all the more noticeable in manual mode, when using the metal wheel-mounted paddles is a real joy. Corsa drastically reduces the stability control's interference, but even on a rainy Modena day there's ample traction and enough grip from the tyres to provide security and confidence. On-throttle oversteer can be encouraged with a flick of lock and heavy dose of power, should you want it; but the Levante's temporarily-driven front axle means slides are measured and limited to a few metres of travel. In a big SUV like this, that's no bad thing.

It also better suits the manner of the Trofeo, which, despite its motorsport-esque name, is more a jacked-up GT than sports car-aping SUV. The steering is too slow and lacking in feel to offer that (its hardware is shared with the Ghibli), while the Levante's two-tonne-plus mass means it can lift and duck over undulations at speed. The front end never feels unresponsive, nor does the body ever feel loose; but it's a fair step away from the rapid, hunkered down movements of a Cayenne Turbo. This is, we're told, a deliberate move in order to retain the Maserati characteristics of a comfortable, fast continent-crosser, rather than an Alfa Quadrifoglio-like raciness. In that regard, this Levante has the philosophy nailed, and most importantly, it does it while also being genuinely engaging and fun, largely thanks to the elasticity and exotic vocals of that powertrain. It is an SUV in which you might opt to take the long and winding road home, which is not something we'd have said about a Levante until now.

The lesser-powered GTS does, admittedly, offer about 90 per cent of the Trofeo's overall performance, for a £20k saving. And since we couldn't notice the 50hp deficit, and the ever-so-slightly softer Sport setting (there's no Corsa in the GTS) had a miniscule impact on lateral responsiveness, you might argue that opting for the Trofeo defies logic. But, let's be frank; a V8 Levante is unlikely to ever be the sensible decision. The better-finished, better-equipped and faster Cayenne Turbo would, relatively speaking, be a smarter candidate for that. No, we suspect a V8 Levante will be most interesting to those who want an additional car that's different, exciting and very Italian above all else. Those who could easily justify forking out the added premium for the top variant - a first year tax rate of over two grand should ensure that. In the case of that person, the Levante Trofeo ought to be a very desirable offering. One that we're very happy has finally joined the range.