We will now attempt to review the new Megane Renaultsport 275 Trophy without once mentioning the Nurbur- ...oh, damn.

Yes, we drove the 275 Trophy at the Nordschleife. But this is NOT the car that set the 7min 54.3sec FWD record. That is the Trophy-R, a much more extreme expression of the Megane to be built in a limited run of 250 of which 30 will be sold in the UK to the hardest of hardcore Renaultsport fans. With a starting price of £36,430 they'll need to be. 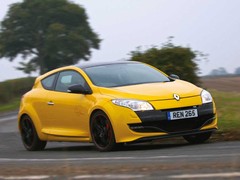 The 275 Trophy, meanwhile, costs a more reasonable £28,930 and is basically a 'best of' package, comprising the Cup chassis and limited-slip diff, an Akrapovic titanium exhaust, remapped engine and a full complement of seats and creature comforts. And some stickers.

Number crunching
You can still buy a Megane 265 for £25,990 and add the Cup pack to that for £1,350. For a little over a grand more the Trophy gives you the blingy exhaust (it saves 4kg too) and highly desirable Recaro seats (usually £1,300 extra) as standard, along with various branded trimmings. For more of a flavour of the trick Trophy-R you can add fancy Ohlins Road&Track 'Dual Flow Valve' dampers with clicker adjusters and, at the front, hydraulic bump stops like the Clio 200. That'll add £2,000 to the price, the Michelin Pilot Cup Sport 2 tyres specifically engineered for driving fast around German toll roads another grand (TBC). With these two options you've got a car with more than a hint of the Trophy-R's focus, drama and track ability but a more rounded character catering to those who want a (super) hot hatch that can also do the daily grind.

Yes, that equates to a £30K-plus Megane, something that seems to provoke an irrational and hysterical amount of rage in some folk shortly before they point out you could have a Leon Cupra, Golf R or Audi S3 all with, varyingly, more power, prestige or driven wheels. 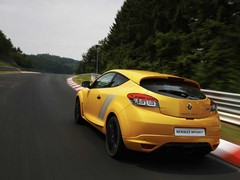 Stickers and optional Speedlines for Trophy

To which the Megane offers little more than a Gallic shrug. Performance gains in Renaultsport's world are won through handling first, horsepower second. Which is a brave stance in a world many define by power outputs and 0-62 times rather than how fast it'll actually cover ground.

Say it as you SEAT
Speaking of which we'd better discuss how it actually drives, somehow avoiding the subject of where that assessment took place. The cars we drove were all equipped with the Ohlins dampers and Cup 2 tyres, these of course being the key differences in terms of the abilities compared with the existing 265 we already know. Like that car the base 275 runs Michelin Pilot Sport 2s on the standard 18-inch wheel, Bridgestone Potenzas on the 19.

Like all Renaultsport Meganes, the Trophy is all about the front end and works its tyres incredibly hard. Indeed, you get the sense sometimes all the rear wheels do is stop the back end of the car dragging along the floor. 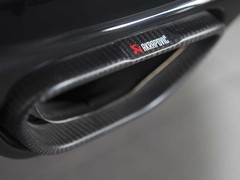 The Cup 2s are up to the challenge though, an on-hand Michelin man (no, not THAT Michelin man) explaining the aramid belt that runs the full circumference of the tread area helps maintain the tyre's shape and increased sidewall rigidity provides confidence on turn-in. Michelin also promises a 50 per cent longer life than the previous Cup tyre and even after a morning of constant abuse on the launch event the cars were on their original rubber.

Option tyre
There's certainly a pleasing amount of weight to the wheel and the sense of something to push against when using what seem like massively over-ambitious entry speeds. The Trophy will eventually understeer but hangs on doggedly with no sense that front-end washout has been engineered into the chassis to dissuade you from leaning on it properly. And as with all hot Renaults there's well telegraphed willingness to use weight transfers to pivot the car around the front axle if you finally have reached the extent of the grip. Soon as the front end is pointing where you need it you can get hard on the power too, the mechanical limited-slip diff hooking up far more positively than either ESP-based systems or even the actively controlled Haldex-style one in the Cupra and Golf GTI Performance. 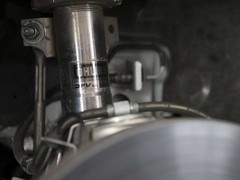 the SEAT in particular

, having watched the onboard videos of Jordi Gene. "He is on the power much earlier than I would be in the Megane - if I was to drive this car the same way we would just get understeer." And that tallies with experience of both the

- the VAQ 'diff' needs a moment to wake up and rally the troops before actively pulling the front end into the turn, Gene's pre-emptive throttle inputs achieving just that.

The Megane, meanwhile, is all about carrying speed rather than building it and there's a pillowy pliancy in the posh dampers that just seems to slow everything down and give you time to think. There are no sharp edges to the damper stroke, just fabulous body control and exploitability the kind of which you can only get with a well-engineered passive damper. What, you thought it was horsepower that makes cars go faster? 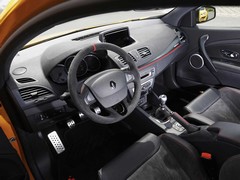 OK, so the Trophy has a little more of that too. But the engine work has focused on the mapping, extending the existing torque curve to match that of the power. The rev limiter still cuts in a little earlier than you'd expect, not helped by the linearity of the power delivery and monotone roar of the exhaust characteristic of all hot Meganes. The adjustable shift-up beep is actually quite useful when you're pressing on, the Akrapovic exhaust adding more growl off boost and characterful bangs and pops on the overrun. Only a slightly balky shift action gets in the way; calm your inputs a little and it's happier. Aurally it's unmistakably a turbocharged car though and perhaps the better for it - it's not trying to sound like anything it's not.

The standard brakes seem well up to the job too, the Trophy-R getting optional larger front discs (350mm rather than 340mm) on aluminium bells if you really want to give it death on track and reduce unsprung weight by another 3kg. We're waiting to hear if you can have these on the Trophy; the lovely looking Speedlines that save 5kg themselves will be available optionally though. 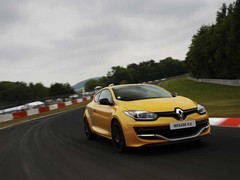 Trophy defined by handling rather than horsepower

The extreme nature and headline grabbing (guilty as charged) achievement of the Trophy-R are all well and good but threaten to put those of the 'regular' Trophy in the shade a little. Which is a shame because this is a properly focused car combining the astonishing raw speed and track ability of cars like the R26.R with all the daily usability that defines the hot hatch experience. The -R reveals the lengths required to bag those final tenths; the Trophy reveals just how potent the standard package already was.