Forget objective appraisal, I want to tell you directly why the

is one of the best cars I've driven in a long time. 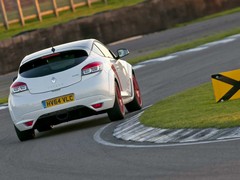 Built for this but actually good on the road too

I'll assume you know the gist but here's a quick re-cap. The

is an evolution of the 265 we know and love, with a little more power and tasty features including an Akrapovic titanium exhaust and the option of super trick and rather expensive Ohlins dampers. The limited edition Trophy-R moves the game along, getting all the best bits as standard, stripping out rear seats and nearly 100kg of excess flab, adding Michelin Pilot Sport Cup 2 tyres, composite Allevard front springs, race seats and a few other choice bits and bobs. If you want it even more hardcore the optional two-grand pack fitted to this car upgrades the brakes to 350mm front discs on aluminium bells, adds six-point harnesses, swaps the battery for a lithium ion job saving a significant 16kg and chucks in storage bags for your track wheels.

The result is a £39,300 (as tested) hot hatch that also just happens to be the fastest front-wheel drive car around the Nurburgring with a lap time of 7min 54.3sec. But all this you probably already knew. 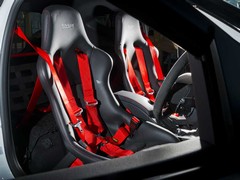 , which swiftly unravelled when it became clear the car that actually set the record was a little more trick than the

one you could buy

. Renaultsport then casually both broke the record and offered up a car in the exact spec required to achieve it. Which is what you have here. You may regard it rather extreme and expensive. It is both. In theory you too could take it to Germany and drive it around the Nurburgring in 7min 54.3sec. But I'm less in awe of that than the fact it offers up an amusing Gallic up-yours to SEAT and, by extension, VW. And seemingly exists to expose the marketing myth under which the Leon Cupra was announced at the Geneva show.

It's a bit juvenile really but I admire Renault for doing that. Especially if it means building a few cars like this. 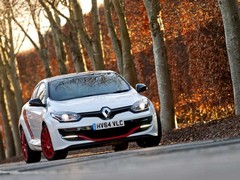 In the comment thread to follow there will, inevitably, be someone who immediately dismisses the Megane on the basis that it's French and front-wheel drive and therefore cannot possibly qualify as a real man's car or, indeed, a sound and rational purchase. A similarly priced German alternative - be that a BMW M235i, Porsche Cayman, Golf R or whatever - will be offered as evidence of this.

It's not a sound and rational purchase, I'll accept that. But it is, by some significant margin, one of the more driver-focused products ever sold in a mainstream dealership. We're talking the equal of cars like the BMW M3 GTS, caged up GT3 RS 911s, Black Series AMGs and the like.

This is one of those cars you know is just going to be brilliant before the wheels have completed an entire revolution from rest. The regular Trophy is hardly sloppy but the complete absence of play in any of the controls and the angry bark from the Akrapovic exhaust are immediate reminders of the Trophy-R's intent. In standard mode it gives you 250hp; pressing the Sport button once releases the full 275hp and relaxes the ESP, a longer push disables it entirely. With 21kg of sound deadening removed you can hear various relays around the car click and clack and as you pull away the super-tight limited-slip diff seems to bounce the front wheels around on full lock, the low-speed ride jiggly and tightly wound too. 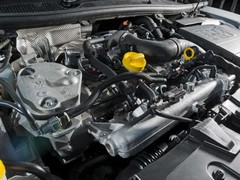 Through the Alcantara trimmed wheel the steering feels super direct and unusually weighty for an electric system, the gearbox tightly gated and precise and the pedals perfectly placed and matched with a slop-free throttle response. A place to do business.

Myth buster
As is the Renaultsport way the springing is on the fierce side but the Ohlins dampers also have a mid-stroke cushiness about them not present in the standard items and permit a fair amount of vertical movement. This is quite hyperactive at low speeds but, such is the body control, the harder you hit stuff the plusher it becomes, be that suburban speed bumps or serrated apex kerbs on the track.

On a cold, wet and slippery B-road - say, a favourite back route to a Goodwood track day to pick an entirely random example - the Megane is absolutely stellar. Spray roars off the inside of the wheelarches, stones ping against the underside of the body and the uncorrupted feedback through your hands and your tightly clamped hips gives you an endless stream of information. 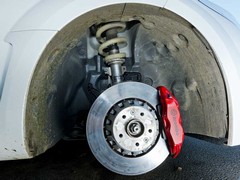 Like all hot Meganes the Trophy-R is all about the front end. It's a traditional Renaultsport set-up of super keen turn-in and enthusiasm to pivot around the front axle that utterly rubbishes the idea that FWD can't be fun. The stiff sidewalls of the Cup 2 tyres and entirely mush-free steering play a big part and there's confidence to lean hard on the front end. Matched with an urgency to change direction that is, frankly, shocking in the context of most modern performance cars. Whichever axle(s) they send their power to.

Pitch it in and the front end goes exactly where you want it; nail the power and the rush of air roaring through the exhaust signals the turbo waking up and power going to the front wheels. Unlike the Haldex-based Golfs and SEATs there's no wait for the mechanical diff to wake or hook up either, the Megane's proactive front end able to cope with earlier applications of throttle than you'd credit. Saying that it's interesting hearing Renaultsport record setter Laurent Hurgon compare his driving style with that of SEAT's Jordi Gene. Inthe Leon's case Gene is early and brutal on the power to wake the diff and use the VAQ system's traction to haul it out of the turn, screaming tyres be damned; Hurgon's style is rather more precise and based on exploiting the Megane's livelier rear end to rotate it to the direction he wants before getting on the power. A more subtle and artistic style you can enjoy even at road speeds, the shift-up beep actually quite useful given the monotone roar from the exhaust gives you little sense of the pending redline. Chu-chu-chuff runs into the soft rev-limiter are frequent even so, this and the ripple of bangs and pops when you lift off the kind of NVH we can all enjoy. 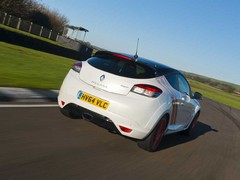 Make sure those tyres are warmed up...

Other preconceptions the Megane delights in rubbishing include the idea a 'ring specific set-up has no relevance beyond that particular 13-mile stretch of German tarmac. Because the Trophy-R is actually more compliant than the non-Ohlins equipped car and capable of swallowing huge bumps and camber shifts without once deviating from the chosen line. It doesn't isolate you from them, simply filtering the information into useful feedback rather than distracting noise. I rather like the fact that Renault chose to focus on handling rather than outright horsepower as a route to record-breaking success - another example of the Trophy-R going against the grain.

And on the track that sense that it's the GT3 RS of hot hatches simply increases. Like 'proper' 911s the Megane is not a car that makes allowances for the timid or lacking in talent. As I discover on just my second lap around Goodwood trailing the brakes to keep the nose tucked in for the left-hander at St Mary's. Fine in a 'normal' car but like my old 172 Cup the Megane has the kind of built-in instability you can exploit to your advantage if you know it's going to happen. Or leave you looking like an idiot if you haven't got your tyres up to temperature and aren't ready for it. Click on the RS Monitor telemetry here and see if you can spot the point it all goes a bit wrong... 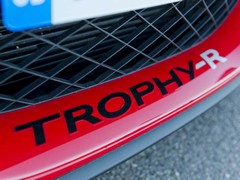 Extra stickerage in case you missed the memo

For the relatively modest numbers on the spec sheet the Trophy-R feels seriously rapid too. The difference between this and the standard Trophy is a modest sounding 212hp/tonne against 201hp/tonne but the combination of the weight saving, higher cornering speeds and additional grip and traction from the Cup tyres (once warmed up, ahem) means the -R comfortably carries huge pace at all times.

It's a magnificent machine, the most focused built by a mainstream manufacturer for a long, long time and a car that reveals greater depths the harder you push. Cars like this don't happen often and we should celebrate the fact Renault is mad enough to let something like this loose on the market.

The Trophy-R isn't for everyone. But it's one of my favourite ever cars. And I hope with this missive I've managed to win over a few doubters.

A lap of Goodwood