Is the latest addition to the 'junior' AMG line-up the thinking man's E63 or a pale imitation?

Lazy cliches are the bane of any car review and to be avoided at all costs. So at no point in this story will you hear me refer to the E43 estate as a load lugger or praise its abilities in this regard. Except there, where I just did. 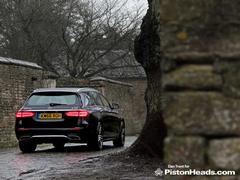 Space, pace and the minimum of fuss, by AMG

Suffice it to say though, the arrival of a big black Mercedes wagon with a punchy 401hp twin-turbo V6, 4Matic four-wheel drive and smattering of AMG branding was most welcome given James and the team had, erm, loads to lug to the NEC through January gloom for the Autosport International show. A fast Mercedes estate with long-distance waftability, a comfy cabin stacked with all the gizmos and a hint of AMG attitude for when the roads get a little more interesting is as appealing a concept as it was when we tried it in

a short while back.

The basic format - tickled 3.0-litre twin-turbo V6, AMG tuned 4Matic four-wheel drive and suspension and a nicely downplayed image - is very much the same as the C43 and, indeed, the rest of the new junior AMG range that'll use versions of this engine. Until such time as the Drift Mode enhanced E63 estate is confirmed (the smirks when asked about it on the saloon launch suggest it's 'when' and not 'if') this is currently the most potent E-Class estate available and gains a nominal power boost over the 367hp C43. Torque remains the same at 384lb ft though, indicating this is more a question of maintaining the E-Class's hierarchy in the range/offsetting the near two-tonne kerbweight.

Bit of something extra
Starting at £58,290 the E43 estate is two grand more than the equivalent saloon and a step up from the £47,700 (give or take) of the AMG Line E350d and E350e hybrid equivalents. As and when the E63 appears it'll still represent a healthy saving over the V8 flagship though, Mercedes keen to emphasise this is a still a bona fide AMG and a definite step up from the branded addenda you can stick on your E220d. 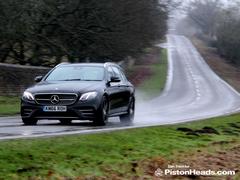 Good luck idenitfying the AMG in this weather!

So you get an AMG specific 31:69 front to rear torque split for the 4Matic four-wheel drive system, now available on right-hand drive models by virtue of being a standalone module added to the 9G-Tronic gearbox rather than integrated into the casing as it was on the previous seven-speed. This apparently gives AMG greater scope for tuning the system to suit the car and market. Indeed, for non-AMG 4Matics sold elsewhere the split is 44:55, like many of its type the system essentially adding a transfer case and front propshaft to an intrinsically rear-wheel drive layout and bleeding off torque to the front wheels when needed. The aim of course is to keep the characteristic rear-driven balance customers are used to but with all weather traction and less of the implied 'scariness' of traditional rear-wheel drive.

As in the C-Class though there seems to be some clunkiness in the application of the system. In the C43 we noticed some chuntering on full lock and at low speeds, such as pulling out of parking spaces. In the E43 it's arguably even more noticeable, the front wheels 'skipping' as if there's some transmission wind or a locked diff somewhere in the system. Interestingly the Porsche Panamera 4 S we've got in at the moment does the same thing, albeit to a lesser extent and Mercedes is promising to get back to us since raising the issue. If the E43 had the E63's Drift Mode we could have disengaged the AWD system to see if that's the root cause but, sadly, there isn't the option. Maybe AMG could add it as a 'Parking Mode' instead! 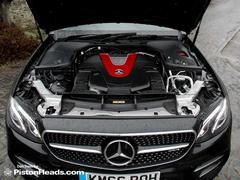 Not the full nutter V8, but not found wanting either

It's only noticeable because the rest of the E-Class package is so typically refined and assured. This is very much Mercedes in its comfort zone and it shows, the cabin lavish and opulent in the firm's current style. Compared with the W124-influenced severity of the previous E-Class (especially the pre-facelift cars) it's borderline chintzy but has substance and functional rigour to back it up. The widescreen and endlessly configurable display is impressive too and finally addresses the standalone tablet style screen, hatred of which seems to have dominated PH debate following any Mercedes review of the last few years.

Is it worthy of the AMG badges though? Well it's not a slow car, that's for sure! Benchmarks like the 4.7-second 0-62 time are suitably impressive, that being just a tenth slower than the 6.2-litre V8-powered E63 estate of the previous W212 generation. It makes less of a performance of its performance though, the twin-turbo V6 smooth and refined with just a hint of aural attitude via the exhausts and - we're assuming because the C43 does this - the speakers too. As these systems go it's reasonably convincing. It'll never match the instant response of the big cube motors like the 6.2 or even the current 4.0 V8 but once spooled up the V6 has strong mid-range and the kind of useful performance that makes short work of slip road sprints and the rest. 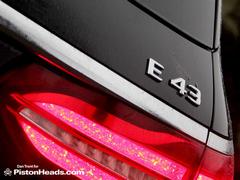 In the current AMG style there are driver modes and configurability galore, the E43 using multi-chamber air springs branded Air Body Control. This is tuned by AMG and paired with uprated components like new steering knuckles, stiffer bushes and retuned geometry with more negative camber up front and the like. The differences between AMG-lite and the full fat versions are evident here though, there being the odd tremble through the structure over harsher bumps you wouldn't get in an E63. Like the C43, this is very much an eight tenths car, not one to be pushed to the limit. You get that from the gearbox too, which screams away holding low gears in the sportier settings trying to contrive a sense of urgency. In fact it's much better quietly shuffling through the nine ratios available to feast on the mid-range drive - manual override and/or the configurable Individual mode are your allies in this.

Driven thus it's a very effective, fast and comfortable way to cover ground. The traction advantage of the 4Matic system is more subtly deployed under way, the E43 having the all-weather pulling power of a fast Audi without the nose-heaviness. In the best possible sense this is a 'making progress' kind of car, with a pleasing sense of maturity and just enough attitude to keep you interested. This, combined with the understated looks, make it a very appealing combination of practicality and under the radar performance.