PH returns to the SLR, now with less Mercedes and a welcome extra hit of McLaren 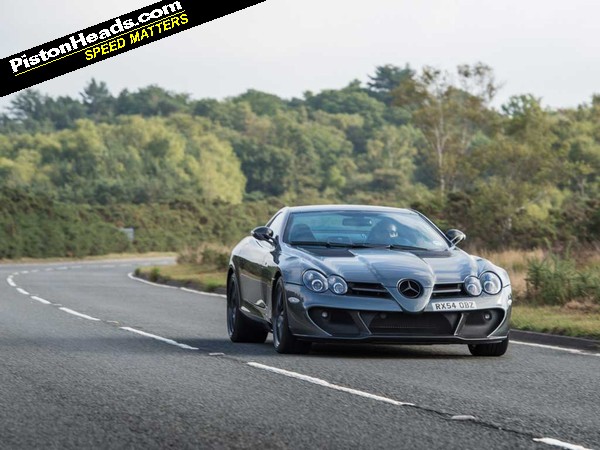 Surely there can be nothing better in this world than a sodding great V8 with a supercharger and 600-odd horsepower? 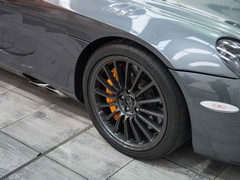 One with side exhausts. And 'improved breathing'.

Whatever other criticisms - often misguided - have been thrown at the Mercedes SLR McLaren a lack of aural drama has never been among them. And yet, when McLaren Special Operations decided to revisit the SLR, 'more noise' was on the agenda alongside 'sort the steering', 'improve the ride' and 'make it look even more mental'.

All have which been accomplished and we'll return to. But first the noise.

The SLR's AMG-built engine (a dry-sumped evolution of the M113 5.5-litre used in the SL55 and many others) has always had a ferocity and percussive violence pretty much unique even in the long history of noisy V8s. But McLaren's MSO Edition demo car is in another league. 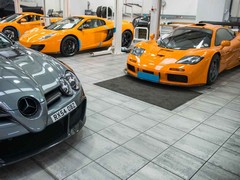 Having arranged meeting with PHer and TVR Wedge owner Simon Marzell promising something that'll challenge him in the decibel stakes he responds by bringing a noise meter. And looks a little worried when I pull up in the SLR. He scores a commendable 106db. The SLR? 116. At the ECU-capped 4,000rpm it'll permit at a standstill.

From inside the SLR it's all about the engine noise. Then I open the windows ... 'kin hell! That'll explain the open-mouthed looks of amazement, and sometimes terror, I've been getting. Under even a tickle of throttle each detonation in the engine sends a pulse of noise out of the side pipes. On the overrun it sucks back in with breathy, distant thumps that crump like artillery shells.

It's quite obviously marvellous.

But then we knew that about the SLR. What we also knew, or thought we did, was that despite the noise and monumental straight-line performance it was a flawed car to drive. Twitchy steering. Grabby brakes. A sense that it was never quite tied down. And a torque converter auto. 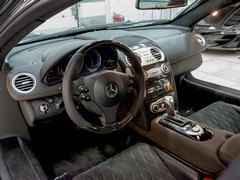 With the SLR project concluded, examples of all the derivatives in storage and this car - the 14th pre-production prototype or PP14 as it's known - knocking about the guys at MSO decided to start, in their words, 'playing around' with a car they affectionately refer to as the old girl. With 75,500 development miles on the clock, many of those racked up at the 'ring during shakedown for the 722 chassis mods, a few prangs along the way and a hard-knock life this is probably one of the hardest working SLRs out there. But one the McLaren boys clearly feel a huge amount of affection for.

As is the way of these things a few light mods turned into something a little more involved and before they knew it an outside (and undisclosed - we asked) partner was drafted in to find a suspension set-up more composed than the standard SLR's but more comfortable than the rock-hard 722's. 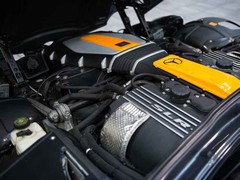 More orange under here too!

MSO also looked at the famously twitchy steering. Fast of rack, heavy around the dead ahead but with a falling rate off-centre it combines with the odd rear-biased seating position to create an unsettling balance. By adding an additional universal joint into the steering gear McLaren was able to straighten the path of the linkage, reducing this alarming sense of the steering suddenly 'speeding up' as you applied lock and generally make it feel more linear and natural. Relatively speaking, given that the front wheels are seemingly in a different postcode from where you sit.

It doesn't take long to realise that the SLR, thus equipped, is vastly improved and more approachable. There's still a sense that, in its stride, you're riding a lit firework and merely along for what is an undeniably thrilling ride. This is a raw and still engagingly uncouth muscle car with more than a hint of menace about its handling. But now tamed just enough to make you feel involved rather than merely an alarmed passenger. 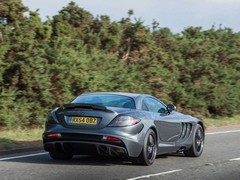 'Still a sense you're riding a lit firework' says Dan

Proximity of bum to rear axle makes judging the revised spring and damping rates an easy task and though still hardly yielding there's now class and subtlety to the bump absorption and resistance to the kind of pitch, roll and corkscrewing motions that could make fast progress in a regular SLR so alarming. In detail McLaren says rear spring rates were raised and damping increased all round for bump and reduced in rebound.

As such the SLR makes a lot more sense. Even that auto doesn't seem such a bad thing; five ratios are adequate with an engine of this reach and the faster of the three manual settings is no worse than the jerky, slow-witted automated manuals in contemporaries like the Lamborghini Murcielago.

On their own the steering and chassis revisions are available for all SLRs for £13,480 (plus taxes), one enthusiastic German owner who's racked up 90,000 miles in regular use opting for just that while leaving the rest of the car standard. 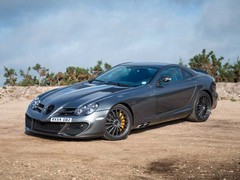 50kg is saved over the standard SLR

Bringing us neatly to the looks...

Now, you wouldn't buy an SLR if you were shy and retiring. But clearly there are owners for which the standard looks are not quite mad enough. Some have gone for chrome wraps. Some have gone aftermarket. Those who've approached MSO will have met a 'never say never' attitude but one grounded in more than just aesthetics, as one who requested a new front end discovered. "We had to explain it would have unsettled the car," says our source, adding, "it's never a straight refusal though. We have a constructive approach."

Hence a new 'aero' look designed with both the suitable visual impact and engineering rigour an officially supplied upgrade requires. New front and rear bumpers and revised side gills with McLaren 'ticks' are included, the whole package increasing downforce by around a fifth. It's still got a three-pointed star on the nose but this SLR is a whole lot more McLaren than before. 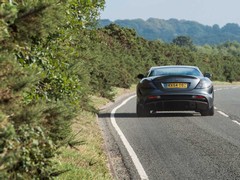 The SLR as McLaren intended. And it's rather good

You need to go all-in to qualify as a full 'edition' car, the work costing over £100,000 and taking three to four months to complete. MSO will cap production at 25 and has built 'nine or 10' so far, selling to customers around the world. A couple have only gone for the rear bumper, others have requested different fronts and not all the colours have been as subtle and menacing as PP14's.

An old dog with a few new tricks, and lessons to younger upstarts in how to create a stir. It took a while, and a bit of fettling, but with MSO's help the SLR really has come of age.