Endearing retro racer or anachronistic folly? Time to find out!

We had been after a

ever since the anniversary special was confirmed back in April. Hopefully it doesn't take much to see why, but we'll come to that. Yet through commitments on both sides, plus the availability of just one prototype press car, the drive was pushed further and further back. 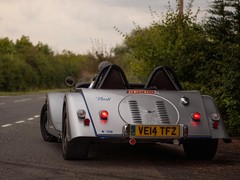 Flat cap advisable with that screen!

As it eventually transpired the booking should have been perfect. A Speedster needs sunshine so what better time than the second weekend of August? OK, that didn't quite work out. But it did correspond with Wilton Classic Supercar weekend and for that the Morgan was perfectly suited.

The sortie to Salisbury, indeed the whole weekend with the Speedster, was a motoring adventure of the delightfully old-fashioned kind. Can this journey be endured with just goggles or is a helmet required? Will a parking ticket be stolen if the roof isn't put on? Will anything fit? And is it going to rain?

Cold and wind battered at 0515h on a Sunday morning, the old days seem grossly overrated. But when strangers in supercars mention how cool your Morgan is, when members of the public smile and wave and when the V8 rumbles off stone walls you won't want to be driving anything else. Providing it's sunny, obviously.

Sunny mood
The Speedster wasn't actually meant to be in the supercar paddock at Wilton; turning up at the gate without the required passes, the taste police declared it was "fantastic" and waved it through. The 997 Turbo in front commented on how great it sounded when we parked up. It's that kind of car.

Riding on such a wave of positivity, how on earth can the Speedster be objectively assessed? It's tough, so let's deal with the good points first. 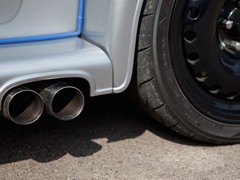 Every single person loved the Speedster's appearance. It isn't markedly different to the Plus 8 but the changes are enough to create a fabulous retro racer vibe. The bonnet strap, the steel-look aluminium wheels, the screen and the exposed tow hooks are minor tweaks but make it look really special. There can't be many other £70K new cars that can command similar attention.

Snap, crackle and pop
And it sounds like an old racing car too. The V8 woofles at start up and emits a thunderous rumble throughout the rev range courtesy of the optional AR Racing exhaust. It pops, it bangs and it crackles. The noise is fantastic. It's also loud enough to set off car alarms but that's another story entirely...

However, the Speedster is also akin to a classic racing car in less endearing ways too. The feeling of being sat high is exacerbated by the tiny screen and a lack of windows. You probably won't fall out but that doesn't stop the fear lingering. And though the steering wheel is close, your body is too close also, meaning your arms can ache from prolonged periods at a skewed angle. Conveniently enough the door is an ideal arm resting place, creating an especially raffish one-handed driving position should one fancy it. 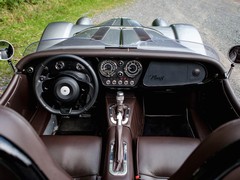 Two hands firmly on the wheel and with a great B-road reeling off into the horizon the Speedster is certainly memorable. The steering is slow and quite heavy but that engenders some confidence in the long front end. The brakes are powerful but need a big push to be fully effective. That muscle car sound is matched by towering performance in any gear.

Blurred lines
The Speedster's main issue is that it feels quite vague when pushing on, discouraging such behaviour. That's a shame as it doesn't seem particularly vicious beyond the limit, but the distant messages relayed up to that point make the experience rather disconcerting nonetheless. Especially when rain is being wiped from goggles with the sleeve of your blazer.

Soon you'll be dreaming of a cruise in the sunshine with the Speedster, a task it excels at if you don't mind some turbulence. But surely that's the remit of the Plus 8? The looks of the Speedster promise a more focused driving experience but it must be remembered the car is really just a cosmetic enhancement of the Plus and nothing more. 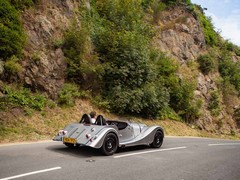 So how's this for an idea? The Speedster is £15K less than a Plus 8. A proper roof can be optioned if you wish. Keep the manual, the expensive auto is fairly sluggish and even Morgan admits that. And invest that £15K in some fancy dampers, maybe some brake tweaks, a decent racing seat, some optimisation. There's latent potential for a stunning track car in there somewhere. The performance is there for sure, as is outright dry grip from the Yokohama Advans. Plus it would definitely be cheaper than a (similarly heavy) Lightweight E-Type...

However. However. Even as is, the Speedster is totally captivating, probably because of its compromises. It's not the last word in dynamic finesse but let those people go and spec up a Boxster S. You'll chortle haughtily at F-Type drivers who think they have a eye-catching British sports car. Cursing it in the wet makes the moments in the sunshine all the more special. But most of all the Morgan Speedster plasters a ruddy great grin across your face and leaves an indelibly positive mark long after the V8 din has subsided and the flat cap is in the drawer. It's joyous.