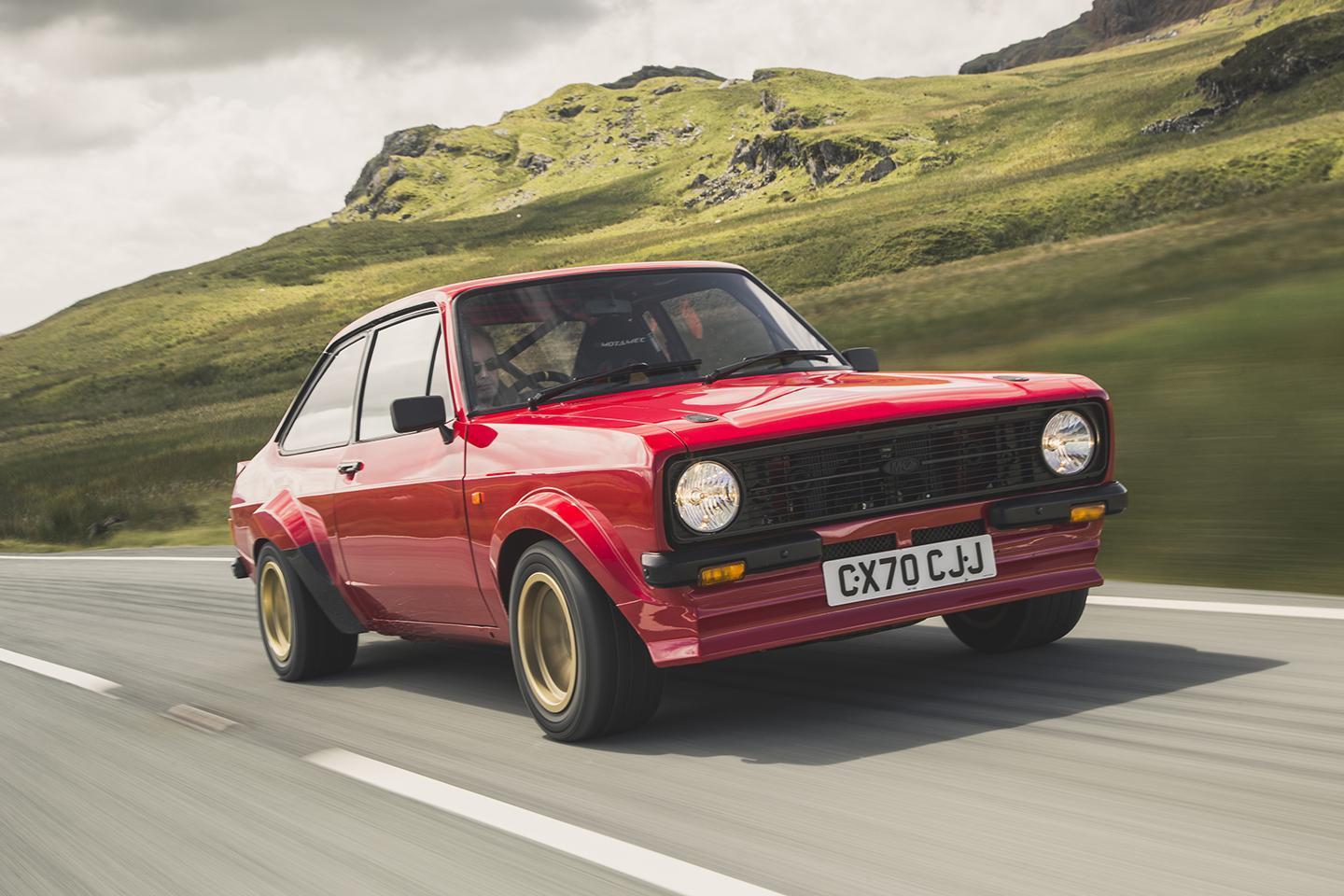 The best ideas are often the simplest. The perennial popularity of the rear-driven Ford Escort for rallying has created a comprehensive eco system of parts and support. Owners have long been able to buy almost every component off the shelf, and the bumps and bangs of competition mean that plenty of largely new cars have been constructed from wrecks over the years.

Until now these have always had to use the identity of original, period cars. But having served the parts market for years Welsh specialist Motorsport Tools has chosen to take the final step: combining new components to build a car capable of passing an IVA test and therefore getting a fresh registration. The company released the first images of its 70-plate Mk2 demonstrator in January and was immediately inundated with interest. "It was a bit ridiculous, to be honest," boss Carwyn Ellis admits, "we had people phoning up from America asking if they could buy a car. We had to say 'we don't know, can you?' - it's not like we're experts on importing."

This isn't an officially sanctioned continuation model, nor is it either a Ford or an Escort, with Motorsport Tools not owning the rights to either of those names. Officially the new car is the MST Mk2. But behind that technicality this is the first new rear-drive Escort to be registered in more than 40 years. More than enough reason to make the long, scenic trip to MST's HQ near Pwllheli to have a go in it.

The first car is effectively a prototype, and isn't representative of the quality of customer cars. "I don't want people to get too obsessed with the panel gaps or the paint finish," Ellis says, "the finished cars will be to a much higher standard." He's being a bit hard on himself, to be honest: seeing the car for the first time inside MST's workshop comes with something close to a heavenly choir soundtrack. It might not be visually flawless, but it looks superb.

While road legal, the Mk2 has clearly been built with competition in mind. The demonstrator is what Ellis describes as 'Stage 2' spec, this being very similar to that used by generations of clubman rally cars. So it gets the widened 'Group 4' arches and a much more substantial Atlas live rear axle located with six links in place of the original road-going Escort's leaf sprung back end. It also has fully polybushed suspension, Bilstein dampers, AP racing brakes and gorgeous 13-inch Minilites shod with Kumho rubber. The interior is even more motorsporty with bucket seats, an Alcantara steering wheel and one of those no-nonsense rev counters that condenses everything below 4,000rpm into its first segment. There is also a total lack of carpets or noise insulation.

The most significant change is under the bonnet. Mk2s have been run with all kinds of engines over the years, and only a small percentage of rally versions ever competed using the exotic Cosworth-developed BDA of the works cars. The demonstrator uses a U.S. spec 2.5-litre four-cylinder Ford Duratec, with individual throttle bodies producing around 200hp. (It also has a catalyzed exhaust, almost certainly another first for a RWD Escort.)

The engine is a proven and relatively inexpensive choice which should be tough, and which sends drive rearwards through a similarly unexotic Mazda MX-5 six-speed manual. Buyers with deeper pockets will be able to specify one of the much more potent 16-valve Diamond engines made by specialist Millington, the brawniest of which are making up to 370hp, plus the option of a sequential gearbox. But with the basic car weighing just 960kg - yes, really - 200hp is still plenty.

The reborn Mk2 is unsurprisingly loud and raucous. The new engine doesn't have the distinctive rasp of a BDA, but it sounds muscular when revved hard and evidently enjoys living life in proximity to its limiter. (This was set at 7,200rpm on the prototype, but may move higher in later cars.) The six-speed transmission stacks its lower ratios closely, and snapping through these through the quick-shift change mechanism is a proper tactile pleasure. But unlike most rally cars, the demonstrator still has realistic cruising gearing, with sixth pulling 2,500rpm at 60mph.

Suspension choice will be very much down to the preference of buyers and what they intend to use their cars for. The prototype is on road-friendly tarmac settings meaning it sits close to the ground. Springs are relatively soft by the standards of modern performance cars, with noticeable lean under bigger cornering loads, but the Bilstein dampers kept everything under tight control. The loaded-up stance suits the car well and even hard use over bumps and crests didn't create the sort of contact between tyres and arches you'd expect given the obvious tightness of the clearances. The result is impressive pliancy, although suspension noise is passed into the cabin with as little filtration as other sounds; hitting a cat's eye brings an explosion like a gunshot.

MST has opted to fit 12-Volt power assistance to the prototype's steering. This is optional, but it did seem to help with low-speed heaving while pretty much fading out once the car was moving. The demonstrator was also running lots of toe-out at the front end, bringing the need for small steering corrections to maintain a straight course at higher speeds. The trade-off is impressive enthusiasm for turning into corners and a proper dialled-in connection once loaded up. Mechanical grip is huge, understeer seemingly non existent.

Yet although the 2.5-litre engine is brawny enough to deliver Escort-appropriate oversteer in the tight stuff, the Kumhos are so sticky on dry tarmac that the higher-speed handling balance was only slightly rear-biased even under full throttle. More slippery conditions, or a one of the brawnier engines, would doubtless alter that - but the MST is a car that builds huge faith very quickly. If the Mk2 has any bad dynamic habits, I didn't find them in our three hours together.

It is a physical car to drive. Steering is light but the clutch is heavy and the gearshift requires heft as well as accuracy. At lower speeds a constant buzzing vibration was wearing, and a fair amount of the substantial heat generated by the engine enters the cabin through the front bulkhead and transmission tunnel. Ventilation comes by the old-fashioned expedient of winding the windows down, something the prototype's roll cage made difficult as the window cranks catch on the door bars. (I lowered the windows with the doors open and then left them like that for the rest of the day; MST says it is working on an electric window conversion.) The upgraded brakes seemed to relish hard use, but graunched and squeaked protest under gentle loadings.

MST is planning to offer three basic specs for the Mk2. The most road biased Stage 1 car will cost around £90,000 including VAT, a Stage 2 like this one is £102,000 and the Stage 3 is £114,000 - with other upgrades like one of the brawnier Millington engines offering the chance to go well past that. A six-figure Ford Escort might seem like a punchline in search of a joke, but that price isn't outrageous compared to the alternatives. Rally conversions based on imported period two-door shells, almost all of which are now left hookers from Scandinavia, are likely to require much more structural work after decades of wear and corrosion. MST will also sell a full shell to anyone who wants to take a DIY approach, and is also working on a Mk1 Escort which will be eligible for much more historic motorsport.

Not that all buyers are planning to compete - Ellis says that several of the early orders for the Mk2 are from nostalgics looking for a road-legal toy. On first impressions you'd struggle to have significantly more fun in anything, regardless of budget. The first new rear-driven Escort in more than four decades certainly won't be the last.